Trump’s supporters see him as a messiah. What does it mean for Christians to try and love them—and him? 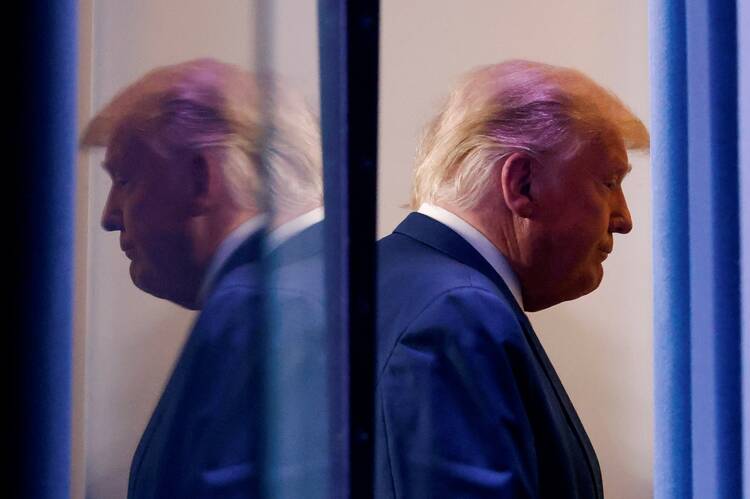 The people who stormed the Capitol are...people. You might hate what they did, as you should—but in another version of this life, they could be any of us with another set of DNA and childhood memories and circumstances. I am not saying that because they are “only human” they are off the hook: They chose to raise hell for an afternoon. They should be held accountable.

But the people who did this really, wholeheartedly believe something—they believe the cause that drove them into the Capitol was justice.

We all believe things. We all hold our own convictions. We are urged forward by a faith that leads us to act in the world, to live, to vote, to protest. And we need to get down to the bottom of this: people of faith rose hell and rioted because they held convictions that are in many ways the opposite of Christian Gospel justice, and they did so on behalf of Donald J. Trump, whose platform is very, very different from Jesus Christ’s.

What are we to do with the fact that the insurrectionists and presumably many more of Mr. Trump’s supporters really treat this man like a messiah?

What are we to do with the fact that the insurrectionists and presumably many more of Mr. Trump’s supporters really treat this man like a messiah?

I rack and rack my brain for solutions. Solutions to erasing President Trump as a god-like figure from people’s minds. Solutions to stopping disinformation. Solutions to dismantling white supremacy. But I am, of course, no one’s savior. I come up against a wall. My scrambling is futile. And then—Imagine Christ’s load! He bears the weight of all our shot convictions. How we all chase after ridiculous substitutes as if they were Love itself.

A thought has begun to nag at me: Yes, those people at the Capitol were submerged in idolatry, but look at that log in your own eye. Imagine Christ’s load. For two seconds, imagine that all the things you hold righteous and correct are just plain wrong. What if? What if? Those white supremacists thought they were right! How malleable we are.

In all the racking of the overwhelmed mind, there is another voice. And if I try to listen: Look at the people who have so aggrieved the nation in the eye and call them beloved.

Donald Trump is going to make his own choices. He has told many lies and harmed many people, and he is going to face the consequences in this life or the next. This man has done horrific things.

Donald Trump is going to make his own choices. This man has done horrific things. Still, I love him. Or—I want to.

Still, I love him. Or rather, I’m not sure that I do. But I want to. St. Ignatius talked about the grace of wanting to want something, how even the desire to desire something is a grace of God. So if we cannot love someone, let’s lean in to the wanting.

I want better for him. I want better for all of the people who rioted for him at the Capitol—advocating white supremacy and violence hurts everybody. I want better for everyone suffering because of his administration’s policies and the often nightmarish realities of the United States. Just as I want for my family, for my friends and for myself.

We may feel bright anger, righteous anger because what happened at the Capitol and what has happened through so much of Donald Trump’s presidency is unjust. Unloving. So much of our nation’s history could produce this anger. And, as the Rev. Bryan Massingale pointed out through the words of St. Thomas Aquinas last week, anger “is passion that moves the will to justice.” I am angry. I also know that I—a young, white, upper-class woman—have not endured the trauma and evil and obstacles that others have no choice but to live through. I do not wish to tell others how to feel.

How simple was my Gospel, no? For God so loved the world? Everything you did, you did it to me?

But the heaviness of all of this—a religiosity that praises President Trump and his false gospel, a world order spiraling further and further into hatred and division—I think it would get at something beyond anger, too. Is it grief? Is it sadness? I don’t know. Something beyond it all that holds everything. A love that bears it all. How simple was my Gospel, no? For God so loved the world? Everything you did, you did it to me?

I think Jesus might have taken in the scene of chaos and destruction and racist hatred at the Capitol and let the whole of it break his heart wide open and then walked away with a single prayer on his lips.