This nun has tweeted a prayer for Trump every day for four years. It hasn’t gotten any easier. 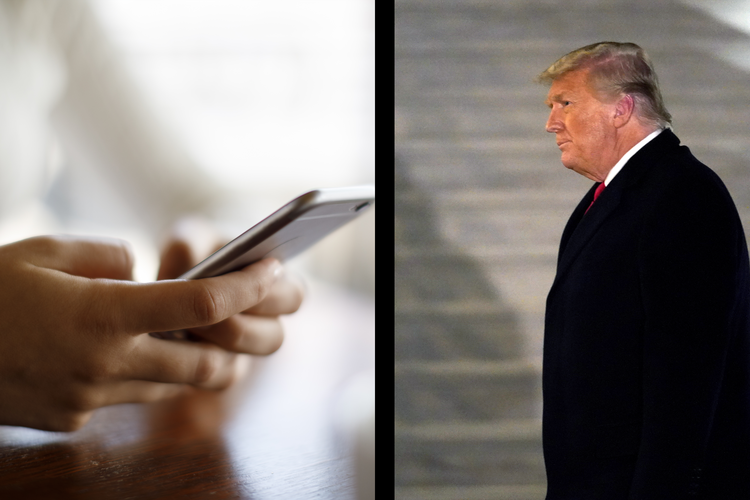 In this Tuesday, Jan. 12, 2021, file photo, President Donald Trump arrives on the South Lawn of the White House, in Washington, after returning from Texas. (AP Photo/Gerald Herbert, File)

Every day, Sister Susan Francois logs onto Twitter and shoots off a short prayer for President Trump, tagging the @POTUS account rather than Mr. Trump’s now-suspended personal account. She began her public prayers three days after the president’s 2017 inauguration, tweeting that she was praying for the president and the United States and urging Mr. Trump to fulfill a campaign promise of releasing his tax returns. (Some prayers, seemingly, go unanswered.) She committed publicly to praying each day which, she told The New York Times in 2018, was “the hardest spiritual practice I’ve ever committed to.”

With days left in Mr. Trump’s term, Sister Francois told America she followed through on her pledge to post a daily prayer. Even if they have become a bit more assertive following the violent storming of the U.S. Capitol by the president’s supporters.

“It has been a crazy four years,” she said. “And the way it’s ending is, perhaps, crazier though. Really, it’s just lifted the veil of what has been underneath everything.”

With days left in President Trump’s term, Sister Susan Francois has followed through on her pledge to post a daily prayer, even if they have become a bit more assertive after the violent storming of the U.S. Capitol.

Sister Francois entered the Sisters of St. Joseph of Peace in 2005. Today, she serves on her congregation’s leadership team.

Below is a transcript of our conversation, edited for length and clarity.

As Mr. Trump wraps up his term, how has the daily prayer changed your view of the president from those early days?

I’ve always prayed with the news as part of my personal prayer practice, but I don’t know how much I would have been able to continue that, with how troubling the news has been on the national scale, particularly because of this administration’s actions.

It also has been very transformative for myself, in terms of how I have reacted internally to President Trump and his administration’s policies. When you pray, you’re in relationship. And I have noticed over the years that I am more and more able to recognize his humanity and the brokenness that is behind many of his policies. Somehow that has helped me to not demonize.

Pope Francis would say we have the globalization of indifference on the one hand, but we also have this movement towards dehumanization. So, the public prayer practice that I’ve committed to has helped me to not respond to fear with fear or hate with hate. That has been a formative process for me. The second thing I would say is—from the reactions that I’ve gotten from various people who follow the tweets—it has served as a good guidepost for them, for others, in that sense, as well.

For people who disagree with Mr. Trump’s policies or who are angry about his incitement of the mob that attacked the Capitol and who feel like Mr. Trump is undeserving of their prayers, what advice from your own experience would you offer?

In the beginning, my prayers were much more fact-based and policy-based, where I was not treating him as a person. I went through a phase of transformation. Many times, when I really can’t come up with anything nonviolent to say, my prayer to @POTUS is: “That you will recognize you are a beloved child of God, and so is everyone else.”

When you pray, you’re in relationship. And I have noticed over the years that I am more and more able to recognize his humanity and the brokenness that is behind many of his policies.

It’s the greatest spiritual crisis that we’re having right now. And at the root of pretty much most of the human-made problems that we’re having right now is that a lot of people are walking around, like Thomas Merton said, not knowing that they’re shining like the sun. People do not know that they’re beloved—I truly believe that—let alone be able to believe other people are also, too. More and more, I am just wondering if that’s not where the work needs to be.

Having this practice of not tweeting until I have something nonviolent that I can say has really helped me come to understand someone whose actions—such as locking children in cages or inciting an insurrection—which I would say are morally wrong, is still a beloved child of God. And so is all of his administration. And so are the people who are hurt by it. Focusing my prayer on that has been mind-blowing and heart-expanding.

What about some of your more recent tweets, which despite being framed as prayers, could be described perhaps as rage-tweeting?

I have been accused of that from time to time. And I’m sure, at times, perhaps they are a little passive-aggressive. I will say that.

It was not until, in the midst of the insurrection, that I sent a second tweet where I crossed that line intentionally. Prior to that my intention was always to be willing to disagree but to do so respectfully and to trust that God can do anything.

I don’t have a transactional prayer. It’s not like I thought, if I pray for something, Donald Trump would change. It’s all part of the greater mystery of the universe and the heart of God.

But on Wednesday, Jan. 6, as I witnessed what was occurring, as did everyone else, I was no longer able to not say something.

I don’t have a transactional prayer. It’s not like I thought, if I pray for something, Donald Trump would change. It’s all part of the greater mystery of the universe and the heart of God.

I do not believe that those tweets are passive-aggressive. I believe those tweets are speaking the truth in love. So I’m still praying for him as a human person, a beloved child of God, worthy of dignity and respect. And at this point, I feel called to treat him with dignity and respect by being honest. I think it is very clear that he should not be in office at this point because he is not fulfilling his constitutional duty. That’s not political. He could be of any party. If anyone had done that, [they would] have crossed a line. At least 10 members of his own party realized that [when they voted for his impeachment].

Dear @potus, you have now been #impeached a second time by a bipartisan vote including 10 members of your own party. Continuing to pray you come to understand your culpability for endangering human lives & #democracy. Praying for our democracy & that you do not more harm to it.

Have any responses to your daily prayers stuck with you?

One woman who wrote to me shortly after The New York Times article appeared said she had gone to confession. To confess, apparently, her anger at the president and how it was really taking over her ability to be a peaceful person. Part of her penance was to read my tweets and to reach out to me and ask me how I do it. I just told her: “Really, it’s kind of like what your mom taught you: ‘Fake it ‘til you make it.’” I pray until I get the one thing that I can truthfully pray with peace; which is why it often comes down to that beloved person of God.

What do you make of calls for healing in unity without a process of accountability included?

I’m a sister of St. Joseph of Peace and our charism is to promote social justice as a path to peace. You can’t get to peace without justice. It’s a both-and, not an either-or.

At this point, I feel called to treat him with dignity and respect by being honest.

I’ve seen some Catholic figures who are having some contrition for actions that led to a Catholic culture which could be hijacked by what’s been happening lately. Most recently, I read Mark Shea’s blog post. We all have to follow our own consciences. And we all have to treat each other respectfully. But where there is true need for healing, there’s first a need for contrition.

What do you make of Twitter’s decision to kick the president off the platform?

I think that they are right. I think any person that violates their code of conduct—that they make very clear when you sign on—which prohibits any actions that cause hate, that cause violence. It’s not a free speech issue. Twitter maybe should have done this earlier.

We have to use our tools responsibly. There is a lot of room on social media for us all; to be better and nicer to each other. I think we all need to have a little bit of prudence in how we use our social media.

Do you plan to keep praying daily for President Biden when he is sworn in next week?

I have decided to continue praying for the president through public tweets. Though, it will most likely be different. I’m looking forward to having a president that I can disagree with on substantive policy issues and not just on how we treat other human beings. When I was a young sister, one of our elder sisters always prayed for the president and the Congress during Morning Prayer. I really think it’s important to pray for our leaders. So, I do intend to tweet for President Biden, starting at noon on Jan. 20.

What do you think your first prayers for Mr. Biden will be?