Podcast: The view of the U.S. Capitol insurrection from the Vatican

Podcast: The view of the U.S. Capitol insurrection from the Vatican 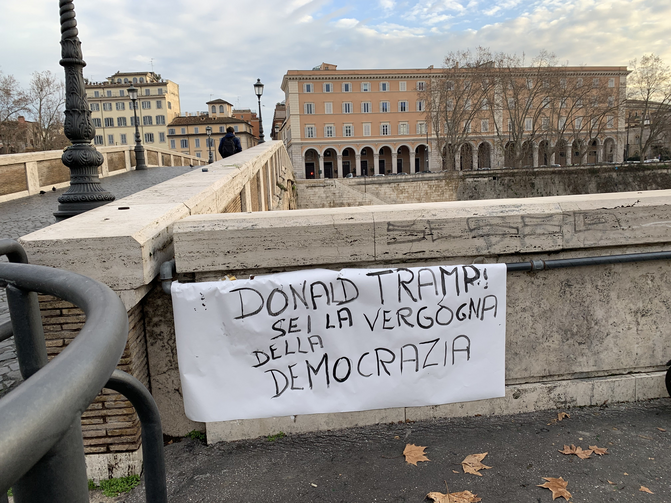 A sign in Italian reads, "Donald Tramp, you are an embarrassment to democracy," near the Ponte Sisto bridge in Rome Jan. 7, 2021. (CNS photo/Cindy Wooden)

The eyes of the world were on the United States last week, when a group of insurrectionists supporting President Donald Trump stormed the U.S. Capitol building as Congress was certifying the results of last year’s presidential election. Pope Francis said he was “astounded” and denounced the violence and the movement that caused it.

This week on “Inside the Vatican,” host Colleen Dulle and veteran Vatican correspondent Gerard O’Connell discuss Pope Francis’ challenge to the U.S. to overcome its divisions and how the U.S. bishops will need to step up in order to achieve that. “The church can't be missing in action in such a big crisis,” Gerry said.

Colleen and Gerry also explain this week’s update to canon law which opens the permanent lay liturgical ministries of lector (reader) and acolyte (server) to women for the first time. For a more in-depth look at the change, check out Colleen’s explainer article here.

After this episode was released, Pope Francis received the Covid-19 vaccine. You can read Gerry’s report here.

Provide feedback on this article
Join the conversation: Login or create an account
Before you can comment, you need to update your profile to include your first and last name, as required in our comments policy. Then reload this page and you'll be set up for commenting. Update your profile
More: Inside the Vatican / US Politics / Pope Francis / Vatican