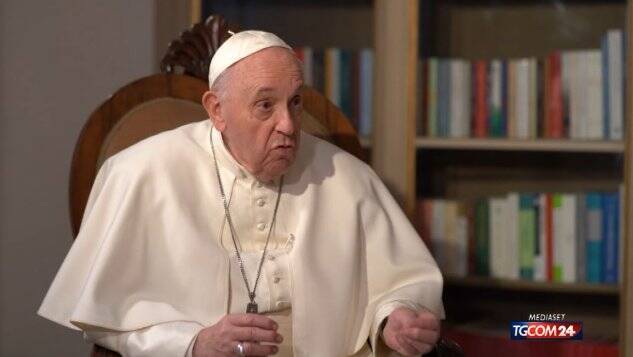 Pope Francis speaks to a reporter from Italy's Canale 5 in a screen grab from clips of the interview broadcast Jan. 9, 2020, on the channel's sister station, TGCOM24. (CNS screen grab)

Pope Francis, speaking publicly for the first time about the assault on the U.S. Capitol, today exhorted government leaders in the United States “and the entire population to maintain a high sense of responsibility in order to soothe tempers, promote national reconciliation and protect the democratic values rooted in American society.”

Speaking after reciting the Angelus from the private library of the apostolic palace, where he has previously met with U.S. presidents Barack Obama and Donald J. Trump, Pope Francis began by saying, “I extend an affectionate greetings to the people of the United States of America, shaken by the recent siege of the Congress.” He prayed for the five people who lost their lives “in those dramatic moments.”

Addressing the violence of the assault, Pope Francis said: “I restate that violence is always self-destructive. Nothing is gained by violence, and much is lost.”

Pope Francis: “I restate that violence is always self-destructive. Nothing is gained by violence, and much is lost.”

He then went on to appeal to those in positions of authority in the United States to exercise responsibility at this delicate moment in the history of the country.

He concluded his statement by invoking the assistance of “the Immaculate Virgin, the patroness of the United States of America, that she may help them to keep alive the culture of encounter, the culture of care, as the way to build together the common good.”

Vatican sources told America that Pope Francis is “deeply concerned” about the situation in the United States and is praying for peace and harmony in the country, which he visited in 2015. He will give further expression to that concern in an interview on Channel 5 of Italian television that airs this evening. In extracts published and broadcast by the channel yesterday, the pope condemned the assault on the Capitol and the movement that led it.