Pope Francis and Benedict XVI have received the Covid-19 vaccine 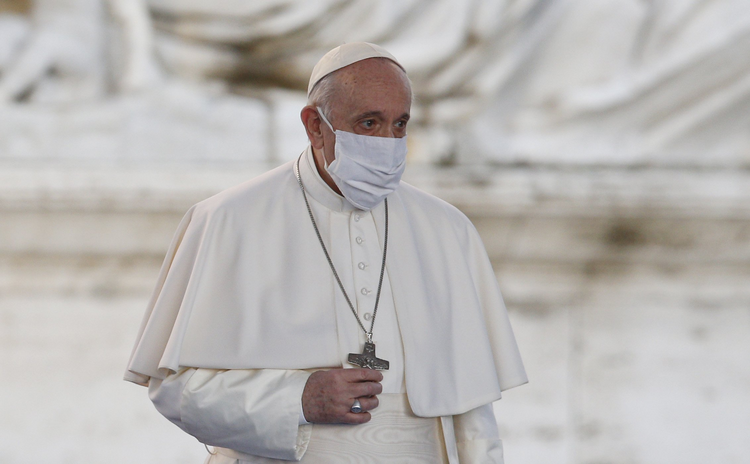 Pope Francis wears a mask for protection from COVID-19 as he attends an encounter to pray for peace, in Piazza del Campidoglio in Rome Oct. 20, 2020. (CNS photo/Paul Haring)

Both Pope Francis and retired Pope Benedict XVI have received the first dose of the vaccine against COVID-19 after the Vatican started vaccinating its employees and residents Jan. 13.

On Wednesday, Mr. Bruni told the press in a statement that “the campaign of vaccination against Covid-19 began this morning in the atrium of the Paul VI audience hall.” He said this was done “in accordance with what was already communicated by the Health and Hygiene Direction” of the Vatican City State. He did not give any further information.

The Vatican made photos available to the press of the specially prepared atrium where Vatican first responders, employees and their family members, as well as retired cardinals and officials, will receive the Pfizer-Biontech vaccine.

In an interview broadcast on Italian television last Sunday, Pope Francis announced that he had registered to receive the vaccine and said, “I believe that everyone should receive the vaccine; it is an ethical option because your health, your life is at stake and also you are putting at stake the life of others.” He added: “Next week we will begin to do it in the Vatican, and I have reserved a place. I will receive it.”

Archbishop Ganswein had told the German Catholic news agency KNA Jan. 11 that Pope-emeritus Benedict, who lives in a converted monastery in the Vatican Gardens, and his entire household staff wanted to be vaccinated as soon as the vaccine was available in Vatican City State.

He told Vatican News that the retired pope has been following the news “on television, and he shares our concerns about the pandemic, about what is happening in the world, about the many people who have lost their life because of the virus.”

Pope Francis: “I believe that everyone should receive the vaccine; it is an ethical option.”

“There have been people he knows who have died because of COVID-19,” he added.

Archbishop Ganswein said the retired pope is still very sharp mentally but that his voice and physical strength have weakened. “He is very frail and only can walk a little with a walker.”

He rests more, “but we still go out every afternoon, despite the cold, in the Vatican Gardens,” he added.

This article was updated on Jan 14, 9:15 a.m. ET. Material from Catholic News Service was used in this report.