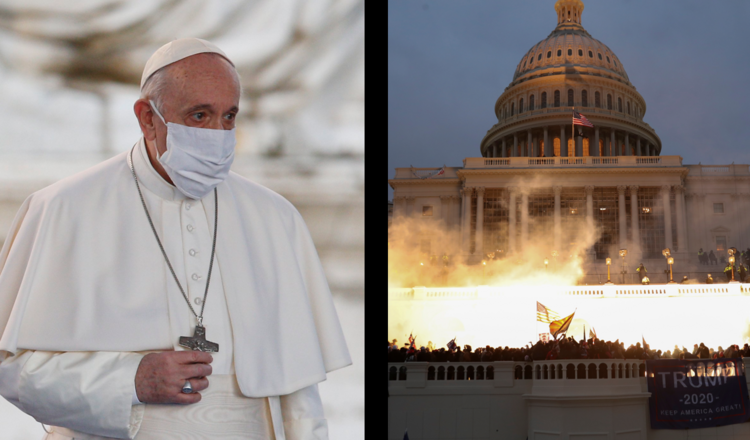 Pope Francis has condemned the violence that took place on Capitol Hill on Jan. 6 and the movement that caused it, “irrespective of the persons [involved].” He also announced that he would receive the Covid-19 vaccine during the coming week and said “everyone should be vaccinated,” as it is an “ethical option.”

He said this and much more in an interview of around half an hour with Italy’s Channel 5 television correspondent, Fabio Marchese Ragona, which will be broadcast tomorrow evening, Jan. 10. In the interview, he speaks about the pandemic, politics, abortion and the assault on the U.S. Congress earlier in the week. Extracts from the interview were posted on the network’s website this afternoon and are used in this story.

Pope Francis has condemned the violence that took place on Capitol Hill on Jan. 6 and the movement that caused it, “irrespective of the persons [involved].”

He said he was “astounded” at disorder in the United States capital on Wednesday and added that “even in the most mature societies there’s always something that doesn’t work, people who take a way that’s against the community, against democracy, against the common good.” But, he said, “I thank God that (since) this has broken out one can see well [what happened] because in this way a remedy can be found. Yes, this is to be condemned, this movement as it is, irrespective of the persons [involved].” He did not mention President Trump’s name.

He said: “Violence is always like this, isn’t it? No people can boast of not having even for one day a case of violence. It happens throughout history, but we must understand [it] well so as not to repeat it and to learn from history.”  Moreover, the pope said, “we must learn that the irregular groups that are not well integrated in society will, sooner or later, carry out such acts of violence.”

In the interview, Pope Francis also confirmed that the Vatican will begin vaccinating its employees next week and said he, too, would be vaccinated. “I believe that ethically [speaking] everyone should have the vaccine,” he said. “It’s an ethical option because you are putting your health, your life at stake, and you are also putting at stake the lives of others.”

The pope announced that he would receive the Covid-19 vaccine during the coming week and said “everyone should be vaccinated,” as it is an “ethical option.”

“We will start doing it in the Vatican next week,” the 84-year-old pope said, “and I have booked myself [on the list for vaccinations]. It must be done.”

As news of the interview broke, Vatican News announced that the pope’s personal physician has died as a result of Covid-19. It said Dr. Fabrizio Soccorsi, 78, whom Francis chose as his personal doctor in 2015, has died in the Gemelli Hospital in Rome, where he had been moved for oncological problems but died today “as a result of complications due to Covid-19.” The Vatican has not made public the last time Pope Francis was in contact with Dr. Soccorsi.

Update: This article was updated with a more accurate translation of the pope’s words.