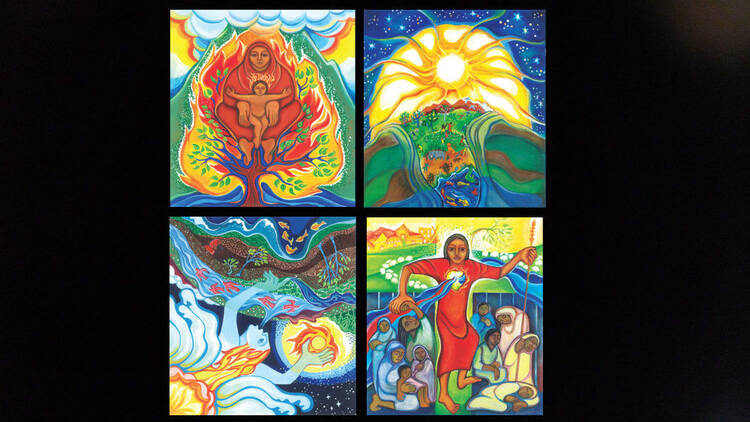 Imaged from the The O Antiphons, by Ansgar Holmberg, C.S.J.

Ansgar Holmberg, C.S.J., 86, didn’t paint her O Antiphon series to edify or instruct anyone. They were meant only for herself.

Ansgar (she likes to be called by her first name) has been with the Sisters of St. Joseph of Carondelet for 67 years, and although she has spent time teaching children and offering spiritual direction, she created these seven paintings over the course of three years as a personal way to contemplate Scripture.

“I had read what other people had said, but I decided to paint them for myself, for me to understand them better. That’s one of the ways I learn,” Ansgar said.

Now the seven paintings, done in brilliant gouache (a kind of opaque watercolor), are gathered in a small book, Praying the Advent Names of God, paired with poems composed by another sister in the community, Joan Mitchell, C.S.J.

Each antiphon is a name of Jesus taken from Scripture, and they are the basis for the popular Advent hymn, “O Come, O Come Emmanuel.”

The O Antiphons are a series of seven verses dating from the sixth century and prayed during vespers during the last week of Advent. Each antiphon is a name of Jesus taken from Scripture, and they are the basis for the popular Advent hymn, “O Come, O Come Emmanuel.”

Ansgar’s images are saturated with color and inhabit a strange space between iconography and myth. Ansgar said she did not set out to express a theological idea with her works; she simply followed her intuition.

“I didn’t have any rules or laws or requests put upon me, but it was my own expression of where I was at that time as I worked with these,” she said. “I put my own spin on it, and it went a bit more cosmic.”

Wisdom, for instance, is frequently portrayed in Western art with symbols like a lamp, a book or a female form enthroned; but in Ansgar’s conception, Wisdom is a figure descending fluidly from the heavens, grasping the sun in one hand, breathing out waters and engraving the bed of a riverbank with the other hand. Wisdom, Ansgar said, is proceeding from the womb of God.

“Because we’re finite people, we need a form for wisdom. I made it a human form, but colored her blue to give her an otherworldly-ness,” Ansgar said. “Here is wisdom, breathing a mist over the land. A mist is more permeating than rain; it permeates our skin. She’s like a child playing before God, drawing her finger to make a waterway, taking a star out of the sky to give us our sun. Some of the trees are upside down. There is no right side up in the world. I did it that way to give that impression that we can’t say we’re right side up: Here we are, floating in space.”

“O Adonai,” too, is an arresting but unusual image. The verse says, “O Adonai and the Ruler of the House of Israel, you appeared to Moses in the fire of the burning bush, and on Mt. Sinai gave him your law. Come, and with your outstretched arm redeem us.”

“What is a woman doing there?” Ansgar asks. She recalls that, from the burning bush, God instructed Moses to tell people that “I AM” sent him.

Ansgar said, “The I AM is the Uncreated, Unborn, Unchanging, Undying Infinite, which is beyond us. But it was a woman who gave body, flesh and blood to the I AM, who came as this baby. I thought she was there, so I put her there. She made visible for us the Invisible.”

Ansgar said she worries less than she used to about making her work theologically airtight.

“I just go intuitively. Wherever it goes, it goes. When you’re old, you kind of go that way,” she said.

“We have the truth within us. It’s very deep, and the divine in us keeps wanting to reveal itself. Little by little, truth does reveal itself if we hush up and pay attention,” she said.

Ansgar believes women, in particular, are drawing out the truths God wants to reveal to us.

Ansgar believes women, in particular, are drawing out the truths God wants to reveal to us. She was heavily influenced by the work of Ade Bethune, the artist closely associated with Dorothy Day and the Catholic Worker Movement. Ansgar was impressed by how “strong and true” Ms. Bethune’s work was when she began to train as an artist.

“That was one of the qualities we had to measure up to,” she said. “It couldn’t be sentimetnal-ish.”

Christian art typically focuses on Christmas as a moment when God communes with man; but in Ansgar’s conception, the contemplation of the divine is, in the words of Sister Mitchell’s poem for Wisdom, “a relentless summons for communion,” not only between God and man but between individuals and between humans and the earth.

“Creation is our neighbor,” Ansgar said.

Her “O Dayspring” image shows a radiant sun rising over an edenic valley that seems to be unfolding itself out of the darkened earth. Ansgar said she meant to evoke a dim and polluted world, with people being given the power to push back and seek healing for the earth.

Ansgar acknoweldges that some, in their zeal for protecting and respecting the Earth, go too far and begin to worship the natural world itself. This is a mistake, she said, but she also believes that God is so deeply within the natural world it cannot be easily separated from him.

“God holds it all. God holds the sparrow,” she said. “You’ve seen a sunrise or a sunset, where your whole being is lifted up, and you’re aware of the beauty of God. Or in being touched by a baby when it’s born. That’s such a God moment; we can’t separate it. God holds it all, and God is within us. The tree outside the window is not God, but God sustains it, holds it, loves it. So ought we.”

She said it’s impossible to tease apart love of God from love of neighbor, and she has come to understand the Earth itself as a neighbor.

“It’s one love, loving the dear neighbor without distinction, and that includes love of creation. It’s not worshipping creation; creation is a gift. Creation is a gift of God. And in it, we see the care of God and the love of God. I don’t worship the tree, but I love it, I can tell you that,” Ansgar said.

Her favorite image from the series is “O Key of David.” A cruciform figure in red holds a staff in one hand and reaches out to support the frail and needy figures clustered about his feet. His heart is open, and seems to be both burning and flowing.

“It’s open. It’s the way through. We all have a cruciform [in our bodies] if you stretch out your arms, and right at the intersection is the heart. That is what we open and close. We include or we exclude. In that heart is the place of transformation,” Ansgar said.

If viewers see in her work an image or idea she didn’t intend, that’s just more evidence that we’re all tapped into a communal state, Ansgar said.

“We’re all more connected than we think we are,” she said.