‘There’s no stopping the baby.’ The pandemic won’t cancel Posadas this Christmas. 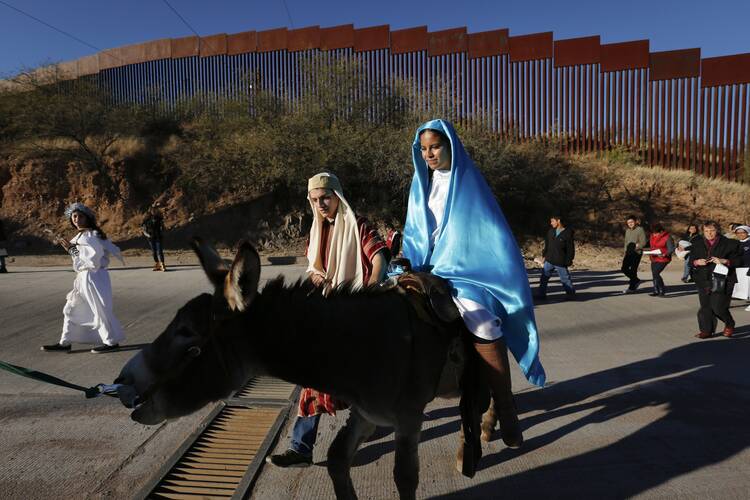 Saul Gonzalez and Kenia Salas play the parts of Joseph and Mary as they make their way along the international border fence in Nogales, Mexico, Dec.

María Elena and René Burgos have five children and, among other things, 2020 brought them their first grandchild.

“It wasn’t ideal to have a baby during a pandemic, but when you’re pregnant, there’s no stopping the baby,” Ms. Burgos said with a laugh during an interview with America.

You could call the Burgoses a Catholic powerhouse couple. María Elena coordinates confirmation at Christ the King Church in Los Angeles, and René is in his fourth year of formation on his way to being ordained a deacon for the Archdiocese of Los Angeles.

The couple has celebrated Las Posadas with their family for most of their 30 years of marriage. Las Posadas translates literally as “inns” or “lodging.” It is a Mexican tradition that re-enacts the Holy Family’s search for a place to stay before the birth of Christ.

During the nine days before Christmas, friends and family gather for the re-enactment, with two children dressing up to play the roles of Mary and Joseph. (A pillow under Mary’s shirt usually plays the role of Jesus in his mother’s womb.) Sometimes, instead of following children, participants will carry around statues of Mary and Joseph from one house to the next.

Las Posadas translates literally as “inns” or “lodging.” It is a Mexican tradition that re-enacts the Holy Family’s search for a place to stay before the birth of Christ.

The Burgos family leads Las Posadas for their community every year. Each night, the group is welcomed, and together they recite an opening prayer and a reading, Mr. Burgos said. He then leads the group in a meditation. Next, they pray the rosary and offer petitions. “The children are always in the front of the group,” he said.

At the end of the rosary, the group moves outside to start Las Posadas. Led by Mary and Joseph, they go from one house to another, singing songs to ask if there is room at the inn. After not finding a place at the first two stops, they finally find lodging at the third. The group enters the home to continue the celebration.

Inside, they distribute little bags of treats, including fruits, nuts and leftover Halloween candy. Even the adults get a little bag, Ms. Burgos said, stressing that the celebration is for everyone. They also share tamales and Mexican ponche—a traditional fruit punch served hot and made of tamarind, jamaica, guava, cinnamon and sugar cane (though recipes vary).

“Some will add a little tequila to their ponche,” Ms. Burgos noted, laughing again.

The celebration continues with the children proceeding outside to break the piñata. Even this tradition has a catechetical element, Ms. Burgos said. Before she allows the blindfolded children to take turns swinging a stick at the piñata, she quizzes them about what the tradition represents.

The traditional piñata is a seven-pointed star, representing the seven deadly sins. The piñata is made of many colors, María Elena explained, because sin can be alluring. But it must be destroyed.

The stick represents the power of God, and the blindfold symbolizes having faith in God. As people around call out “higher,” “lower,” “to the left,” they represent the voices of those around us, some of whom are trying to help us and some of whom are trying to mislead us. The rope, which moves the piñata around, represents that sin is not easy to defeat. “We must persevere,” Ms. Burgos said.

“We’ve had a pretty dark year, but we have to know that Jesus is with us.”

Once the piñata is destroyed, sweets spill out, representing the grace of God.

As beautiful as the tradition is, the Burgoses had their doubts about continuing it in 2020.

“I was thinking there wouldn’t be Posadas this year,” Ms. Burgos said. “But then one of the sisters at the parish told me, ‘If there are no Posadas, there’s no Christmas!’”

The sister’s words, along with the encouragement of their children, inspired the Burgoses to organize a virtual Posadas. María Elena’s mother and aunt, who live with the family, will join the celebration.

Much of the tradition would be easy to do on a virtual platform, like the rosary and the reflection. People will need to provide their own refreshments at home, of course. And for the piñata, Ms. Burgos devised a way to take an image of a piñata and break it up into pieces, like a puzzle. She removes a piece for each correct answer to a question about the Bible.

They organized a virtual Posada for other couples involved in formation for the diaconate on Dec. 18. At the bottom, the invitation reads, “BYOP—Bring your own ponche!”

“We need to be happy, even though there is a pandemic,” Ms. Burgos said. “We’ve had a pretty dark year, but we have to know that Jesus is with us.”

The Ignatian Solidarity Network has also been hosting virtual Posadas leading into Christmas. A lot of parishes in the Jesuit network are participating in the bilingual celebration, according to José Arnulfo Cabrera, the network’s director for education and advocacy for migration.

“We’re hoping that the spirit of Las Posadas can be felt throughout,” he told America. “We saw it as a critical time for Las Posadas to be understood for what they really mean.”

Mr. Cabrera explained that, in the Mexican culture, it is common to ask for “posada.” “You let someone come and stay at your home for as long as they need,” he said. The Ignatian Solidarity Network is connecting Las Posadas to current U.S. immigration policies.

“We’re hopeful, but we want to continue to advocate to end all of these policies and to welcome immigrants into our country,” Mr. Cabrera said of the incoming Biden administration. “For example, we want asylum seekers to live in the U.S. while they wait for their cases to be heard.”

Currently, thousands of asylum seekers are waiting in Mexico because of the Trump administration’s Migrant Protections Protocol. Mr. Cabrera said this policy is in conflict with the spirit of Las Posadas, which commemorates Mary and Jesus seeking refuge.

In the coming days, those who participate in the Ignatian Solidarity Network’s Posadas will hear about the effects of the Trump administration policies and from the Kino Border Initiative, a binational effort to serve migrants, educate the public and advocate for justice. Parishes will also describe how they are welcoming asylum seekers. A full schedule is available and all are welcome to attend, Mr. Cabrera said.

“It’s not only about preparing for Jesus’ birth, but also about understanding how we can give posada to people who, like Mary and Joseph, are looking for shelter,” he said. “Until we see the policies ended, we’re not going to stop advocating.”

— Catholic News Quiz: Vatican Nativity, forbidden Mass hymns and vaccines
— Have yourself a social-distanced Christmas
— Wouldn’t it be nice if an angel told us what to do in a dream?
— This is Your Soul on Mysticism