An open letter to the bishops, from a young Catholic who’s only known a church in scandal 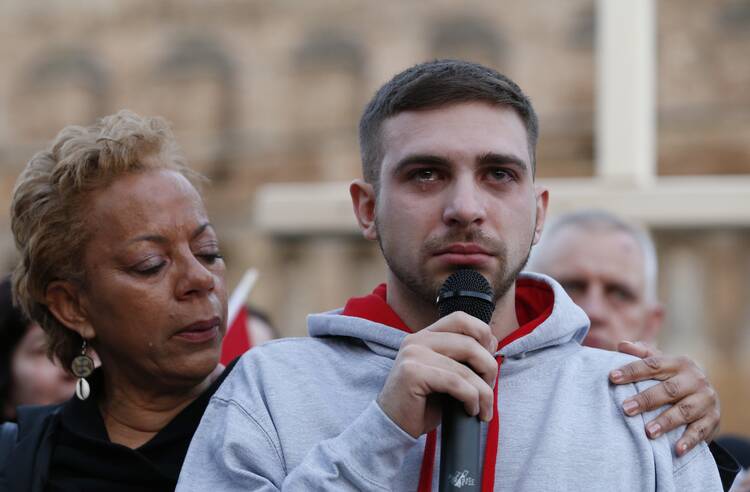 Alessandro Battaglia, an Italian survivor of clerical sexual abuse, cries as he speaks at a rally with other survivors outside Castel Sant'Angelo in Rome Feb. 21, 2019. Comforting him is Denise Buchanan, also an abuse survivor. (CNS photo/Paul Haring)

My mom tells a story about one night when I was 4 years old and had a stomach bug. She stayed up late with me, and when I finally started to drift off to sleep, she turned on the TV. When the news flashed across the screen, she had only one confused thought, “Why is the newscaster in front of our parish?”

Our parish priest, like several others in Boston in 2002, made headlines after it came to light that he had abused several minors in his previous position at a boys’ high school. I remember him coming to our house for dinner, bringing me gifts at holidays and baptizing my younger sister. Then, one day, he was gone.

My mom has often said that her grandmother, a very devout Catholic who died when I was just a baby, would have had an identity crisis of sorts if she had been alive to watch the Boston scandals break. She would have wanted so badly not to believe it. Knowing that the heartbreaking details were, in fact, true would have compromised her trust in what was arguably the most important thing in her life.

Over the years, I have heard adults share similar feelings about the sex abuse crisis. While all their stories are different, the undercurrent is the same: They once believed in the church’s authority. They trusted it. They were raised to believe that priests were good and selfless. When the crisis broke, that trust was compromised. In some cases, it was completely broken.

I have always found this fascinating because, while the sex abuse crisis is deeply personal to my family and my community, I have never known a church without it. I do not remember being Catholic before my own parish was part of a public scandal, which started a domino effect that has not slowed down to this day. Young people did not lose a trust we once had in the clergy; many of us never had that trust in the first place. And that, in its own way, feels pretty terrible and disheartening.

Young people did not lose a trust we once had in the clergy; many of us never had that trust in the first place. And that, in its own way, feels pretty terrible and disheartening.

As heartbreaking as this is to write, the latest news from the Vatican’s comprehensive report on former Cardinal Theodore McCarrick feels like just another episode in the faith life of my generation, which has always been punctuated by reasons to be disappointed in our leadership. It brings with it the same profound sadness that is all too familiar. I am sad and sorry to say that it brings a sudden fear and distrust of the priests in my life, even those I know well and those who have only ever given me reason to trust them. It brings questions from friends about how I can still be Catholic after all this. Perhaps most painful of all, it brings the cold reality that I do not always have good answers for those curious and critical friends.

Studying theology at a Jesuit university, I tried desperately to find some way to make sense of how the church might move forward from the crisis. In the wake of the 2018 Pennsylvania grand jury report, I attended dozens of events on campus—panels, prayer services, open forums—in the hope that I would find some insight that would help me reconnect to my faith without shame. Over and over, I heard professors and campus ministers remind me that this was my church, that I should claim ownership of it, that I should not let the transgressions of individual priests and bishops take my faith away from me.

I hear that. I want very much to be able to take ownership of my own faith, my own relationship with God, my own membership in the body that is the church. But when there still is such a clearly defined hierarchy whose authority stretches far and wide over the faithful, the advice to believe in my power within the church sometimes rings hollow.

When there still is such a clearly defined hierarchy whose authority stretches far and wide over the faithful, the advice to believe in my power within the church sometimes rings hollow.

As a young Catholic, I want to hear something meaningful from church leadership. In fact, I am hungry for it. While I can sit in the driver’s seat of my own prayer and spiritual practices, I want to feel confident that my belonging to this institution is worthwhile. So yes, I am interested in how powerful people within the institution respond when someone like me raises the long-term disillusionment and disenfranchisement of my generation within the church.

Of course, I want to see an increase in lay leadership and authority in my church. Of course, I want to play an active part in healing this gaping wound. But as long as there is a hierarchy, power goes hand in hand with grave responsibility, and as long as there are men in collars who are called to live and promote lives of virtue, it does not feel radical to me to insist that those promises be kept.

The very language that attempts to empower lay leadership should not also be used to let the current clerical leadership of the church off the hook.

The very language that attempts to empower lay leadership should not also be used to let the current clerical leadership of the church off the hook.

This week, the U.S. Conference of Catholic Bishops is holding its annual fall general assembly virtually, and they plan to discuss, among other things, pastoral responses to the Covid-19 pandemic and racism. They will also be briefed on work for child and youth protection within the church, which will undoubtedly bring the timely topic of sex abuse to mind and, hopefully, out in the open. The McCarrick Report’s gruesome details ought to remind the bishops of the diversity—in age, race, ethnicity, gender—of victims who suffered because of the failures of the church's shepherds and, therefore, of the sprawling, unrelenting scope of the crisis.

My sincerest hope is that generations to follow will not have to experience the disappointment and distrust I have experienced. I hope that, instead, they associate the church with revitalization and accountability.

There is no time for shirking this responsibility. To the bishops meeting this week, please listen with open ears and please be courageous in your response.

Molly Cahill is a 2020-2021 O’Hare Fellow at America and a recent graduate of Boston College.