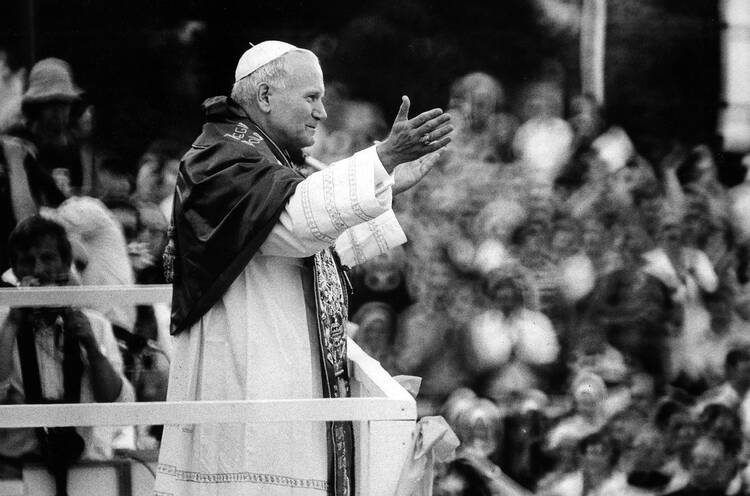 The release of the long-awaited “McCarrick Report” by the Vatican this morning provided significant information about Theodore McCarrick’s abuse of minors and adult seminarians, as well as a long and shameful history of church leaders ignoring complaints and concerns about Mr. McCarrick. It also raised the inevitable questions of who knew what and when, including regarding three popes: John Paul II, Benedict XVI and Pope Francis. John Paul II was canonized by Pope Francis in 2014, less than 10 years after his death.

Mr. McCarrick, once a priest and an auxiliary bishop of the Archdiocese of New York (full disclosure: Mr. McCarrick was the homilist at America’s 100th anniversary Mass at St. Ignatius Church in New York City in 2009), served as the first bishop of the newly formed Diocese of Metuchen in New Jersey from 1981 to 1986, as archbishop of Newark from 1986 to 2000 and as archbishop of Washington from 2000 to 2006. He was made a cardinal by Pope John Paul II in 2001.

In June 2018, he was removed from ministry after the Archdiocese of New York deemed an allegation that he had abused an altar boy decades earlier “credible and substantiated.” In the weeks following, further allegations emerged of inappropriate behavior with minors and adults, including seminarians, and officials in the Archdiocese of Newark and the Diocese of Metuchen admitted that both had reached financial settlements with alleged victims of Mr. McCarrick over a decade earlier. He was finally removed from the clerical state by Pope Francis in February 2019 after a canonical trial and an unsuccessful appeal by Mr. McCarrick of the guilty verdict.

Today’s report largely avoids blaming Pope Francis and Pope Emeritus Benedict XVI for the lack of oversight and restrictions on Mr. McCarrick, saying that Benedict and Francis both assumed that John Paul II had determined that Mr. McCarrick was not guilty of any crimes. In the case of John Paul II, the report argues that he was naturally suspicious of accusations of sexual misconduct against bishops because he had seen similar tactics used in his native Poland under Soviet rule. “Several prelates familiar with Pope John Paul II’s thinking opined that the Pope believed that allegations of sexual misconduct against important clerics were often false and that this belief was grounded in his own prior experience in Poland,” the report states, “where rumors and innuendo had been used to damage the reputations of Church leaders.”

A similar rationale was offered by many church leaders in the case of the Rev. Marcial Maciel, the founder of the Legion of Christ, who was removed from ministry by Pope Benedict XVI in 2006 after multiple allegations of sexual abuse of minors, repeated affairs with adult women and decades of financial malfeasance while serving as head of the religious order. Father Maciel was close to John Paul II, who beatified Father Maciel’s uncle, Rafael Guízar (Pope Benedict XVI canonized Guízar, in 2006), and the priest was a prominent financial donor to the Vatican for many years.

How did this behavior go unchecked for so many years, and how was Mr. McCarrick allowed to rise so far in the hierarchy of the Catholic Church despite persistent rumors of misconduct? And what does his rise say about the oversight of Pope John Paul II?

The McCarrick report notes that despite numerous attempts to determine the nature of Mr. McCarrick’s crimes, none ever resulted in any significant action. In 1999, when Pope John Paul II was considering making Mr. McCarrick the archbishop of Washington, Cardinal John O’Connor of New York wrote to the pope to express his misgivings about McCarrick, saying he felt “a grave obligation” to caution against McCarrick’s appointment because of an anonymous accusation that McCarrick had abused a minor, rumors of adult affairs with other priests and allegations that Mr. McCarrick behaved inappropriately around seminarians, though Cardinal O’Connor also said he would support any appointment of Mr. McCarrick if John Paul II thought it a good choice.

Because the allegation of sexual abuse of a minor was made anonymously, it was ignored at the Vatican; similarly, complaints about inappropriate behavior with adults were dismissed because the priest making the allegations was himself a convicted sexual abuser. Pope John Paul II did ask four New Jersey bishops to investigate claims that Mr. McCarrick was sharing a bed with seminarians at his vacation home in New Jersey, but “three of the four American bishops provided inaccurate and incomplete information to the Holy See” regarding Mr. McCarrick’s activities, according to the report.

Following the publication of the Vatican’s report, George Weigel, the author of the best-selling biography of St. John Paul II, Witness to Hope, spoke with Cardinal Timothy Dolan on the New York archbishop’s Sirius XM radio show. Mr. Weigel rejected the conclusion that St. John Paul II deserved blame for playing a role in McCarrick’s rise through the ranks of the Catholic Church.

“Theodore McCarrick fooled a lot of people,” Mr. Weigel said. “He fooled a lot of laypeople. He fooled the media for years. He fooled his brother bishops, and he deceived John Paul II in a way that is laid out in almost biblical fashion in this report.”

For many Catholics in the pews, however, an important question remains: How did this behavior go unchecked for so many years, and how was Mr. McCarrick allowed to rise so far in the hierarchy of the Catholic Church despite persistent rumors of misconduct? And what does his rise say about the oversight of Pope John Paul II? Is it enough simply to say “the pope didn’t believe the rumors”?

Most historians and Vaticanistas will acknowledge that Pope John Paul II was not strong on efforts to weed out sexual abusers from the priesthood or responding quickly and with compassion to victims; even his most passionate defenders will admit it was a blind spot in his papacy. But the financial largesse of Mr. McCarrick (who, like Father Maciel before him, was a generous patron of many Vatican officials and a prodigious fundraiser as well) creates the unfortunate appearance that the Vatican had an ulterior motive for ignoring any rumors swirling around him. After being named Archbishop of Washington, he gave more than $600,000 in five years to various Vatican officials and fellow bishops from a little-known account called the “Archbishop’s Special Fund.”

The Catholic Church does not teach that the saints were perfect in life. At the same time, the McCarrick report—and the horrific damage that is detailed in its 461 pages—have become a terrible stain on the legacy of a man who only six years ago was named a saint.

Today’s report strongly denies any such influence, saying that “the examination did not reveal evidence that McCarrick’s customary gift-giving and donations impacted significant decisions made by the Holy See regarding McCarrick during any period,” but among the recipients of Mr. McCarrick’s generosity during his six years as Archbishop of Washington were Pope John Paul II ($90,000) and Pope Benedict XVI ($291,000), according to a 2019 article in the Washington Post. A former personal secretary to Pope John Paul II said that donations to the pope were forwarded to the Vatican secretary of state, and may have been redirected to papal charities.

To be clear, the Catholic Church does not teach that the saints were perfect in life. Some of our most hallowed figures took some serious detours on the path to sainthood. St. Ignatius Loyola, after all, murdered a man in a duel; and millions of American Catholics hope for the eventual canonization of Dorothy Day, a person revered for her holiness and witness and who also had an abortion. At the same time, the McCarrick report—and the horrific damage done to innocents that is detailed in its 461 pages—have become a terrible stain on the legacy of a man who only six years ago was named a saint.

More Stories from America:
– Top 5 Takeaways from the McCarrick Report
– U.S. Catholic leaders react to the McCarrick report
– Explainer: What the church has done to fight clergy sex abuse since 2018’s ‘summer of shame’
– Jesus knew about Cardinal McCarrick

Update: This article was updated at 5:20 p.m. on Nov. 10 to include remarks from George Weigel made on “Conversation with Cardinal Dolan” on The Catholic Channel, Sirius XM.