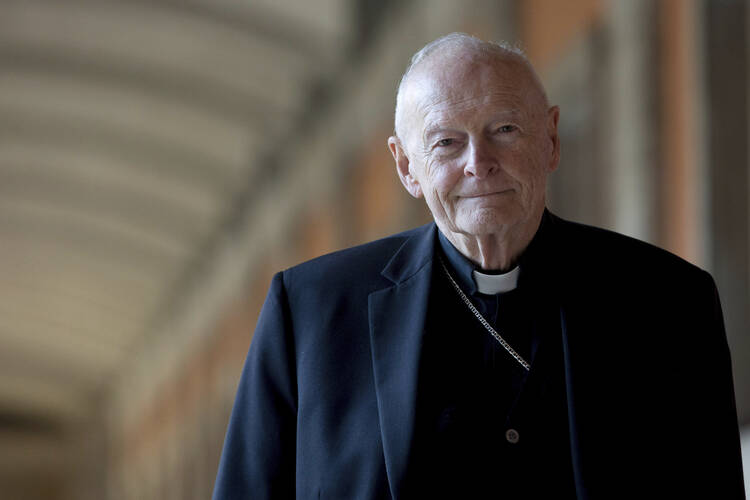 The “thorough study” of Vatican documents was ordered by Pope Francis in October 2018 after the media and the former Vatican representative to the United States, Archbishop Carlo Maria Viganò, raised questions about whether the Vatican bureaucracy or any pope over six decades had allowed McCarrick’s career to advance despite rumors of sexual abuse of minors and seminarians.

What follows is a timeline of the key events in the rise and fall of Theodore McCarrick.

Mid-1980s – A mother wrote anonymous letters to every U.S. cardinal and the papal nuncio describing sexual misconduct of McCarrick toward her children. She never received a response, and no records of her letters exist.

1989 – A seminarian (referred to in the report as “Priest 4”) experienced inappropriate sexual advances toward him by McCarrick including: touching of bare skin, being asked to undress and sleeping in the same bed. The seminarian reported McCarrick’s behavior to Monsignor Anthony J. Gambino. Monsignor Gambino admonished the seminarian and sent him to counseling, saying that he might not be ordained if he continued to make accusations against McCarrick. That same year and after his ordination, the now-priest related his experiences to Bishop Edward T. Hughes of Metuchen, who said he would “take care of it” and appeared aware of prior incidents with McCarrick. Bishop Hughes never spoke to the priest about this again, and nothing seemed to come of the priest’s allegations.

1990 – Bishop James Thomas McHugh of Camden brought Monsignor Dominic Bottino to a small celebration dinner with McCarrick and Bishop John Smith at a Newark catering hall; Monsignor Bottino did not know what the dinner was for or who would be there. During the dinner, after McCarrick asked him to share confidential future information about episcopal appointments and exclaimed that he “deserve[d] New York,” Monsignor Bottino witnessed McCarrick move his hand along a young cleric’s crotch.

1991 – A priest (referred to in the report and hereafter as “Priest 3”) was invited to a beach house by McCarrick and then on two separate occasions to the Waldorf Astoria hotel in New York City. On these three occasions, despite the priest’s reluctance, sexual activity took place.

1992-93 – Six anonymous letters and one pseudonymous letter were sent to different Catholic prelates and institutions.  Archbishop Agostino Cacciavillan, the nuncio to the United States, Cardinals John O’Connor and Joseph Bernardin, representatives of the Newark archdiocese, attorneys for the N.C.C.B./U.S.C.C.B. and McCarrick himself are the only known original readers. Several of the letters were forwarded to then-Archbishop McCarrick. None name specific victims or claim to be written by survivors or contacts of survivors themselves. These letters were treated as defamatory libel and did not lead to any known investigations.

1993-95 – Cardinal O’Connor may have received more information about McCarrick’s abuse while planning Pope John Paul II’s visit to the United States for 1994’s International Year of the Family. He sought “verification” of misconduct and found it through the allegations of a “trusted person”—someone to be identified as “Priest 1” in the report. Following this, Cardinal O’Connor found there to be “no impediments” to the pope’s visit.

1993 – Priest 3 revealed the incidents in confession, and his confessor encouraged him to report them to Bishop Hughes.

1993 – A priest in Metuchen (referred to in the report as “Priest 1”) had been involved in sexual misconduct with two teenage boys and expressed his regret to Bishop Hughes. Bishop Hughes recommended the priest undergo therapy. It was during the priest’s psychological counseling that he revealed various inappropriate encounters with McCarrick, which occurred while he was a seminarian. He alleged that he had been invited on a fishing trip with McCarrick, during which he saw McCarrick “on top of” another priest and was told that this was normal behavior and he was “next.” The same summer, McCarrick asked this priest to drive him to New York and then invited him to stay the night with him, during which McCarrick touched him and wrapped his legs around him. McCarrick called and wrote this priest throughout the summer and asked to be called “uncle.”

1994 – While undergoing treatment in a hospital, the same priest wrote a 10-page letter to Bishop Edward Hughes of Metuchen that detailed the two incidents of McCarrick’s abuse.

1994 – Priest 3 reported the incidents to Bishop Hughes, who encouraged him to forget the misconduct and not to speak of it to anyone. The priest did not speak of it again until he underwent counseling in 2010.

April 1994 – The Holy See received information regarding McCarrick’s possible misconduct while planning the pope’s visit to the United States in April of 1994. Mother Mary Quentin Sheridan, superior general of the Religious Sisters of Mercy of Alma (Michigan), and another priest called Archbishop Cacciavillan to report what they knew of McCarrick’s misconduct; the priest claimed Cardinal James Hickey had been the one to confront McCarrick about his conduct. The nuncio consulted Cardinal Hickey, who denied it. The allegations were not further pursued at this time.

1995 – The psychologist of the priest in Metuchen corresponded with Bishop Hughes and alleged that the priest had been the victim of sexual harassment in the seminary, the Diocese of Metuchen and the hospital.

October 1999 – The archbishop of New York, Cardinal John O’Connor, summarized allegations against McCarrick in a letter to the nuncio. The letter stated that those who lived with McCarrick knew he shared a bed with young adult men in the bishop’s residence in Metuchen and Newark; he also shared a bed with adult seminarians at a beach house on the New Jersey shore, which certain clergy knew and allegedly joked about; a young priest accompanied McCarrick to Puerto Rico and then left the priesthood. The nuncio told Pope John Paul II about the letter.

May-June 2000 – The new nuncio to the United States, Archbishop Gabriel Montalvo, at the request of Pope John Paul II, asked four U.S. bishops to share what they knew of allegations about McCarrick’s misconduct. All confirmed that McCarrick shared a bed with young men, but claimed they could not confirm sexual misconduct. Investigation for the report later revealed that three of the four—Bishop Hughes, Bishop Smith and Bishop McHugh—had shared inaccurate information and did have knowledge of the misconduct.

Aug. 6, 2000 – McCarrick wrote a letter to the pope’s personal secretary, Bishop Dziwisz, in which he denied the allegations made against him flatly.

April 2005 – Pope Benedict XVI, at the recommendation of the nuncio and the Congregation for Bishops, extended McCarrick’s tenure in Washington by two years.

Late 2005 – At the revelation of new details related to Priest 1’s allegations, the pope and his advisers changed course, asking McCarrick to step down so they could find a replacement without controversy. McCarrick resigned by Easter 2006.

2005 and 2007 – Dioceses in New Jersey quietly paid settlements totaling $180,000 to two former priests who had accused McCarrick of sexual abuse.

2006-08 – Archbishop Viganò, who was at the time delegate for pontifical representations within the Secretariat of State, wrote memoranda, one in 2006 and one in 2008, suggesting that a canonical process could begin to bring the truth to light and respond accordingly with canonical penalties if needed. When his superior, Secretary of State Cardinal Bertone, presented the concerns to Pope Benedict XVI, they decided instead to ask McCarrick to maintain a lower profile. This request was communicated to him by Cardinal Re, prefect for the Congregation of Bishops, with the approval of the pope, but the report is careful to specify that his communication “did not carry the Pope’s explicit imprimatur, were not based on a factual finding that McCarrick had actually committed misconduct, and did not include a prohibition on public ministry.” Through a series of meetings, McCarrick and Re discussed the allegations at hand, and McCarrick repeatedly and flatly denied their credibility. He did, however, agree to “spontaneously withdraw” without complaint.

2011 – Priest 3 filed a civil complaint in Superior Court of New Jersey that detailed the sexual activity. Neither the Diocese of Metuchen nor the Archdiocese of Newark forwarded this to the nunciature or to the Holy See.

August 2012 – Priest 3 wrote a letter to Archbishop Viganò, detailing the sexual activity and stating that he believed it was the source of his own problems with the Diocese of Metuchen.

August 2012 – Archbishop Viganò wrote to Cardinal Ouellet and passed along the communication from Priest 3. He copied the letter to Archbishop Becciu and Archbishop Gerhard Ludwig Müller.

September 2013 – Cardinal Ouellet wrote back to Viganò, asking him to respond by setting up an inquiry with the Priest 3 and diocesan officials to investigate the credibility of the priest’s allegations. Nuncio Viganò, though, never acted on Cardinal Oullet’s request. Thereafter, McCarrick’s travel schedule remained full, and his public ministry remained active.

June 2017 – The Archdiocese of New York reported the first known allegation of sexual abuse by McCarrick of a minor, which occurred in the early 1970s. After the accusation was deemed credible, Pope Francis asked McCarrick to resign from the College of Cardinals. McCarrick was then investigated and found culpable of abuse against minors and adults by the Congregation for the Doctrine of the Faith, at which point he was dismissed from the clerical state.

2018 – Monsignor Bottino informed his bishop and Archbishop Christophe Pierre of McCarrick’s sexual harassment in 1990 of the young cleric in Newark. He claimed that Bishop Smith and Bishop McHugh also witnessed the incident and understood what was happening.

Note: This timeline has been updated to include settlements paid to survivors by dioceses in New Jersey in 2005 and 2007.

Kevin Christopher Robles is a Joseph A. O'Hare, S.J., Postgraduate Media Fellow at America. He was previously an editorial intern in 2019.