Does the McCarrick report exonerate Pope Francis? Yes and no. 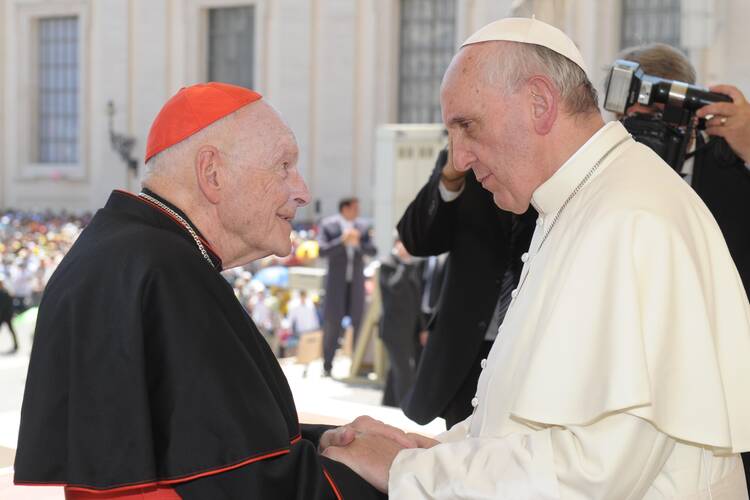 Though Pope Francis was vaguely aware of rumors of sexual misconduct against former Cardinal Theodore McCarrick back in 2013, a Vatican report released on Nov. 10 says Francis believed his two predecessors had properly handled the matter and that there was no need to revisit the claims.

The 449-page report chronicles the rise of Mr. McCarrick, who was removed from the priesthood in 2019 after allegations that he sexually abused minors were deemed credible.

At the height of his clerical career, Mr. McCarrick was an influential figure in Rome and Washington, where he served as archbishop from 2001 until his retirement in 2006.

Allegations of sexual harassment and misconduct, including anonymous claims that then-Bishop McCarrick was a “pedophile” dating back to his time as bishop of the Diocese of Metuchen, N.J., were reported to Vatican officials as early as the 1990s.

But the report said Pope John Paul II dismissed those warnings, believing them to be vicious rumors, and personally approved of Mr. McCarrick’s appointment to Washington in late 2000.

At the height of his clerical career, Mr. McCarrick was an influential figure in Rome and Washington, where he served as archbishop from 2001 until his retirement in 2006.

Over the next few years, the retired cardinal was given verbal commands by Vatican officials to reduce his public profile in order to avoid embarrassing the church should rumors of his sexual misconduct and harassment become public. Mr. McCarrick abided by some of the requests, including relocating from his residence at a seminary and declining invitations to public events, but he largely remained a public figure, including during the early years of the Francis papacy.

According to the report, Pope Francis had been made aware of “allegations and rumors” surrounding Mr. McCarrick’s behavior with adults that was alleged to have occurred before his appointment to Washington. But, the report said, Francis was under the impression that those allegations had been “reviewed and rejected by Pope John Paul II,” as evidenced by Mr. McCarrick’s robust public schedule during the papacy of Benedict XVI. As a result, the report said, “Pope Francis did not see the need to alter the approach that had been adopted in prior years.”

At some level, the entire report serves as a denial of claims made by a former papal ambassador to the United States, Archbishop Carlo Maria Viganò, who said in 2018 that Pope Francis rehabilitated the retired cardinal. Archbishop Viganò said that Francis lifted sanctions from Mr. McCarrick despite being made aware of the seriousness of the allegations. The report says, however, that Pope Francis was not made aware of documents detailing the allegations involving adults against Mr. McCarrick, and that no formal sanctions were ever imposed by Benedict XVI, only “indications” to Mr. McCarrick to reduce his public profile. In 2017, Mr. McCarrick was accused of sexually abusing minors and, following an investigation, Pope Francis removed him from the College of Cardinals. He was later laicized. Mr. McCarrick now lives in a residence for priests as a layman. His lawyer, Barry Coburn, declined comment to the Associated Press.

Pope Francis had been made aware of “allegations and rumors” surrounding Mr. McCarrick’s behavior with adults that was alleged to have occurred before his appointment to Washington.

The report offers an unusual glimpse into how the Vatican previously handled allegations of sexual abuse, its culture of secrecy and the downfall of one of the U.S. church’s most colorful figures. It examines the influence Mr. McCarrick held as the archbishop of Washington, when he was a key figure in international relations as well as a prolific fundraiser for Catholic organizations. But the report said that by 2013, Mr. McCarrick had lost much of his influence in Rome. Archbishop Viganò claimed that the appointment of key U.S. bishops by Pope Francis in 2014 and 2016 had been swayed by Mr. McCarrick. But the report said that the pope had selected bishops who did not appear in letters the cardinal sent to the Vatican.

Several of Archbishop Viganò’s central assertions were confirmed, but others were disproved. The report rejected his claims involving Francis outright: “No records support Viganò’s account and evidence as to what he said is sharply disputed.”

The summary also cites a previously unreported case in which Archbishop Viganò in 2012 allegedly failed to act on Vatican instructions to investigate new claims against Mr. McCarrick by a Brazilian-born New Jersey priest.

More than 90 people were interviewed during the course of the investigation, including Mr. McCarrick, plus Pope Francis and Pope Benedict XVI. The report indicates that Pope Francis was questioned not only about the accusations made by Archbishop Viganò, but also more generally about Mr. McCarrick’s influence in the church.

More than 90 people were interviewed during the course of the investigation, including Mr. McCarrick, plus Pope Francis and Pope Benedict XVI.

“Pope Francis recalled in an interview that he had first heard of Archbishop McCarrick from McCarrick’s involvement in South American church affairs during the 1990s, when he [then-Archbishop Bergoglio] was invited to attend a large dinner of ecclesiastics organized by McCarrick. Bergoglio, who tended to shy away from gatherings of this nature, declined the invitation and did not meet him until sometime later,” the report said.

However, then-Archbishop Angelo Becciu, recently forced by Pope Francis to give up the rights and privileges of being a cardinal because of his involvement in alleged financial misdeeds, told the investigator “he mentioned to Pope Francis the existence of old allegations related to McCarrick in 2013 and then again at some point between 2014 and 2016,” as well as restrictions or “indications” that Mr. McCarrick should be keeping a low profile.

“Pope Francis remembered a brief exchange” with Archbishop Becciu regarding Mr. McCarrick. “He recalled Archbishop Becciu asking rhetorically, ‘But what is McCarrick doing here? He should not be coming around,’” the report said. “Pope Francis stated that Becciu did not elaborate on what the prior indications related to, other than to say that it ‘was something from the distant past’ that had been ‘gossiped about’ and that Becciu had heard about while he was in the nunciature in the United States,” where he served before being named nuncio to Angola in 2001.

“Pope Francis recalled having supposed that any allegations against McCarrick already in existence in 2000 must have been deemed without foundation because ‘John Paul II was a man so morally strict, of such moral rectitude, that he would never have permitted a rotten candidacy to move forward.’”

Groups representing victims of sexual abuse by priests praised the Vatican for releasing the findings of the report but said more must be done.

Groups representing victims of sexual abuse by priests praised the Vatican for releasing the findings of the report but said more must be done.

“In many ways, this is an impressive report—the Vatican’s first forthright account of its own cover-up of a sexual predator,” Anne Barrett Doyle, the co-director of BishopAccountability.org, said in a statement. “Today’s presentation of Pope John Paul II’s culpability in the McCarrick cover-up is particularly important.”

Still, Ms. Barrett Doyle said Pope Francis was “negligent” or even “corrupt” because he failed to investigate the rumors surrounding Mr. McCarrick.

“Plausible deniability must end for popes and bishops,” she wrote. “They are responsible for proactively reading the abuse files, and for correcting the negligent or complicit acts of their predecessors.”

“Plausible deniability must end for popes and bishops. They are responsible for proactively reading the abuse files, and for correcting the negligent or complicit acts of their predecessors.”

Some U.S. bishops said the report highlights how a culture of clericalism allowed Mr. McCarrick’s rise through the ranks of the church even when laypeople and other bishops reported his actions to church officials.

Cardinal Seán O’Malley, the archbishop of Boston and an adviser to the pope on issues related to sexual abuse, said in a statement, “the release of the Vatican’s report today reveals the depth of the suspicion and the clericalism that allowed him to rise to the level of bishop and cardinal in the face of those allegations.”

In a separate statement, Cardinal Blase Cupich, the archbishop of Chicago and someone who helps the pope select new bishops, called the report “unprecedented and a watershed moment as it pulls back the curtain on a culture of clericalism that has separated the clergy from the people they have been ordained to serve.”