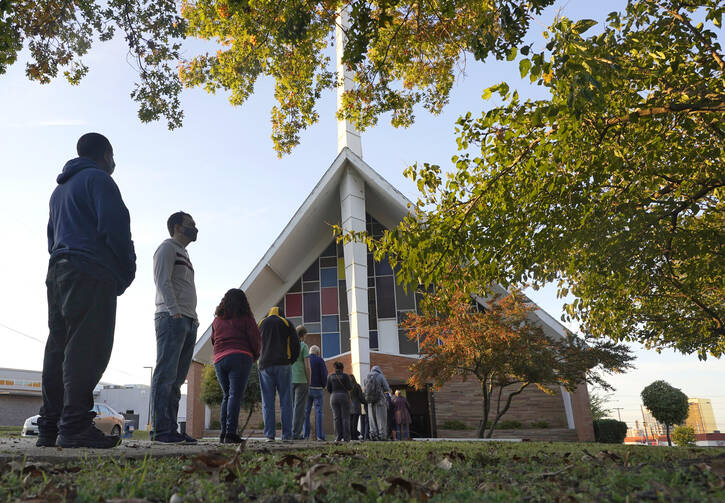 Last night I stepped into a madhouse. I had driven to a local town to snap a quick photo of the election results to send to a numbers aggregator. A quick job—no need to talk to anyone or do anything but stay out of the way until the official results were in. I told the kids I would be back in time to put them to bed.

But 20 minutes before the polls closed, there was still a line stretched out the door of the polling place. A giant moon rose in the frigid air, and a mixed crowd of young and old chattered excitedly in the dark as they waited to cast their ballots. Feeling like something of an impostor, I told the police officer on guard, “I’m with the press; could I squeeze in here?” and he quickly cleared a path so I could get inside. One man shouted out, “Watch out, Jerry, she wants to talk to you!” and everyone laughed.

If I had had my wits about me, I would have stopped and talked to Jerry. But as it turned out, lots of others had plenty to say.

It was, as I say, a madhouse inside. People were clamoring to get in and cast their ballots, and I quickly realized that many had never voted before. They were not familiar with the process, and they weren’t sure how to do it. And there were so many of them that the line from the little curtained booths to the counting machines was all backed up. The machines themselves were full, and every third ballot or so got spit back out, and a cranky man named Paul had to open the machine and feed them in manually.

God, please just give me (and the country) a little patience.
Zac Davis

When I was growing up, election night felt like a party as we stayed up late snacking and joking, watching the electoral map fill up with numbers. I was baffled to discover the other kids in third grade weren't wearing their Reagan/Bush pins every day and did not have strong opinions about taxes or Palestine. So at the polls last night, I was delighted to find a bustling crowd turn out for one of the most important elections in memory. Paul told me he had never seen so many voters before, and that hundreds of people had registered that day, most of them in the last hour.

And he kept on saying it. I questioned him and any other official who had time to talk. They all agreed: This was unprecedented. No one expected this many voters. They thought the bulk of citizens had gotten their duty out of the way with absentee ballots, and they were completely unprepared for this crush.

And no, they did not think this flurry of enthusiasm was a good thing. The same man who, in a lull, complained about how few people turned up for the town meeting every year was disgusted and suspicious to see so many people coming out into the cold to sign up to vote. I saw democracy; he smelled rats.

He was so sure it was a bad thing, I began to doubt myself. Maybe all these people shouldn’t be here. Maybe they didn’t really belong. What if they were scamming the system, somehow, even after showing their IDs and proof of residency? What if they were legit but voting for all the wrong reasons?

It is hard to talk about these things without sounding naïve. I know full well how ideas like “inclusiveness” and “welcome” can be exploited. We have all been in situations where people who really do have bad intentions take advantage of the open-hearted and take cover in a crowd of honest people. And once they are let in, they do the harm they came to do.

Should we be wise as serpents or gentle as doves? Should we let everyone in who wants in or should we be on guard against infiltration by the unworthy?

It is the old dilemma that rears its head over and over again in our daily lives: Should we be wise as serpents or gentle as doves? Should we let everyone in who wants in or should we be on guard against infiltration by the unworthy? It is a question that turns up in obvious ways, as when we talk about immigration, and in more subtle ways, as when we say that everyone should be able to vote and get an education and live in safety but then we build up rules and regulations to make it almost impossible for the ones we consider unworthy.

The question turns up in truly shocking ways when we speak of the Catholic Church.

And that is really what I want to talk about: Who gets to come in and be part of the church?

I have drastically reduced how involved I am with politics. I hate what it does to my state of mind and what it does to the way I think about other people. Suspicion and defensiveness bleed over from politics to every other realm, including the spiritual. I am alarmed at how easy it is for me to think of other people as less than fully human. It has become almost physically painful to put myself in someone else’s shoes, to try to understand how they could think so differently from me, how they could believe things that seem so unbelievable, how they could draw all the wrong conclusions from things that are so obvious. How they could be such rats.

Or, put another way: Blessed are the rats, for we are all rats.

In a democracy, we speak a lot about our rights and responsibilities as citizens. It is good training to believe deeply in applying these principles impartially to all citizens, whether they strike us as unworthy or not. It helps us remember how deeply undeserving we are of the things we have that are even better than rights—interior freedom, saving grace, free will, God’s love and forgiveness, the chance at eternal life.

So I have been chasing these “not you” ideas out of my head whenever I realize they have crept in again. “These people don’t deserve to vote!” Nope. “These people have no right to be here!” Nope. “These people don't understand what they’ve got!” Neither do I, whether we are talking about the blessings of democracy or the blessings of Christ. But if I get to be here, they do too. If that is true for politics, it is doubly true for our faith. We must approach each other with open hearts, or we become heartless. And I saw those open hearts last night, in the perhaps naïve enthusiasm of all those new voters.

It is still a good country, everyone. It is still salvageable. Not because Joe Biden, assuming he wins, is somehow our savior who is going to dry every tear but because Americans keep on turning up, keep on getting involved and keep on being ready to try something new, ready or not. I came away from the polls with a new resolve to nourish optimism and hope, and to keep at bay skepticism and suspicion.

Whatever comes next may be ugly. We all know this. But for reasons I can hardly explain, I felt buoyed up the morning after the election. I so dearly loved to see so many people coming in out of the cold to line up, sign up and do something new. Maybe what I am feeling is just a throwback to the years when politics used to be fun and exciting. Or maybe it is a little whiff of true hope, mixed with the liberation that comes with remembering that democracy is not just a duty but a gift. We are lucky to have it. We are lucky so many people have it. Yes, even the people who vote stupidly or badly or angrily or selfishly. Better a bustling madhouse than a morgue.

People can be healed of madness. It has happened before.

@SimchaFisher
Provide feedback on this article
Join the conversation: Login or create an account
Before you can comment, you need to update your profile to include your first and last name, as required in our comments policy. Then reload this page and you'll be set up for commenting. Update your profile