God, please just give me (and the country) a little patience. 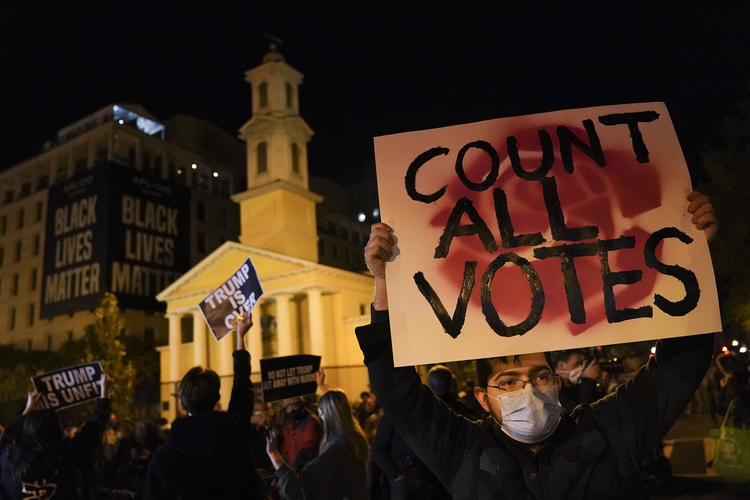 A demonstrator holds up a sign while waiting for election results at Black Lives Matter Plaza, Tuesday, Nov. 3, 2020, in Washington. (AP Photo/John Minchillo)

We were told it would be like this. We knew that it was extremely unlikely that we would know the results from crucial swing states when we went to bed on Election Day.

That foreknowledge has not stopped some election watchers—from the most casual observers to the political junkies—from melting down. Maybe you couldn’t turn off a cable news network or were constantly refreshing a Twitter feed or forecast needle or obsessively checking betting markets.

There’s some analysis to do, but, at best, most of it won’t be useful, and it’s likely most of it will be wrong until after all the votes are counted and the exit surveys are scrutinized.

The only reaction that matters right now for most of us is spiritual.

We need patience. We need to let the votes be counted.

The only reaction that matters right now for most of us is spiritual. We need patience. We need to let the votes be counted.

None of this is to say that this election hasn’t revealed or reaffirmed some deep fissures and problems within our country and our major political parties. One example: The president revealed a damning and dangerous lack of patience late last night in declaring “Frankly, we did win this election.” He stood in stark contrast to former Vice President Biden, who encouraged his supporters to “be patient” and “keep the faith.” And the rest of us—columnists, political operatives and plain clothes citizens alike—will all have ideas about What Is Happening. But in the panic, haze and adrenaline of election night, our ideas and proposals for reform will likely just reflect whatever preconceived notions and priorities that we had coming into tonight. Mine happens to be that Bernie would have won in a landslide. But who knows!

One of the tenets of Jesuit spirituality is not to make decisions in times of desolation. St. Ignatius Loyola wrote that the fifth rule for discernment is “In time of desolation never to make a change; but to be firm and constant in the resolutions and determination in which one was the day preceding such desolation, or in the determination in which he was in the preceding consolation.”

Maybe you’re passionate about voting rights or reforming the electoral college or reforming how your political party aligns and prioritizes certain demographics of voters. But if you find yourself despairing and anxious, perhaps consider hitting pause on trying to solve all the country’s Big Problems. (This just happens to be one nugget of Ignatian wisdom. Turns out, these guys are pretty good at directing spiritual movements. My colleague, James Martin, S.J., has other Ignatian tips for surviving the election here).

If you find yourself despairing and anxious, perhaps consider hitting pause on trying to solve all the country’s Big Problems.

This doesn’t mean that there isn’t a lot of bad spiritual advice out there right now. Glib assurances, sincere as they might be, that “God is in control!” or “Jesus is still on the throne!” fail to engage the real feelings that people might have about uncertainty hanging over a momentous event with real implications for millions of people.

If you have to turn it off and step away, then do that. You’re also allowed to watch events unfold (no one wants to skip to the season finale in their TV show, after all). But beware: It will require spiritual discipline. And I know from experience; it’s a discipline that I often lack.

But I do believe in asking God to make up for our lack. So, I’ll leave you with a paraphrased version of a famous prayer written by Thomas Merton:

My Lord God,
I have no idea where the country is going.
I do not see the road ahead of us.
I cannot know for certain where it will end.
Nor do I really know myself. But I do know
That the desire to figure it out
Before we have all the data
Does not please you.

So, please, help me to be more patient.

At least for a little while longer.

More Election stories from America:
-Jesuit tools to help you survive the election (and its aftermath)
-13 saints (and 2 Marys) to pray to on Election night

Zac Davis
@zacdayviszdavis@americamedia.org
Show Comments ()
Join the conversation: Login or create an account
Before you can comment, you need to update your profile to include your first and last name, as required in our comments policy. Then reload this page and you'll be set up for commenting. Update your profile