Explainer: What is an exorcism, exactly? 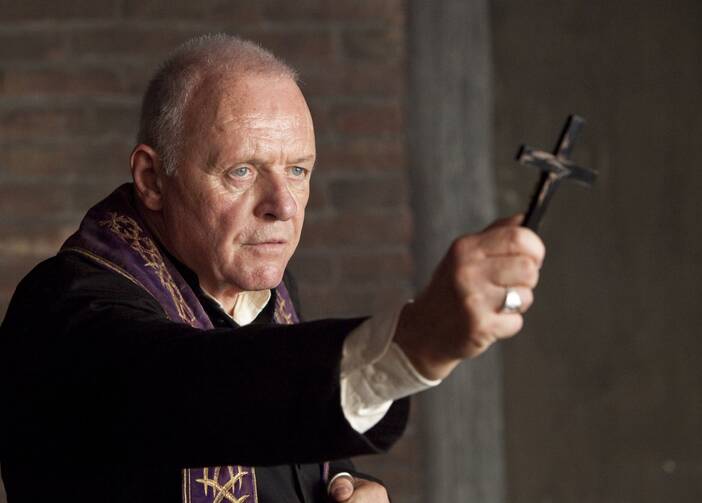 Anthony Hopkins stars in a scene from the 2010 movie "The Rite." (CNS photo/Warner Bros.)

Archbishop Salvatore Cordileone of San Francisco performed an exorcism on Oct. 17 at San Rafael Mission, in Marin County, Calif., where protesters had defaced and toppled a statue of St. Junipero Serra on Sunday Oct. 11. Serra, a Franciscan missionary to California whom Pope Francis canonized during his 2015 visit to the United States, was targeted by Indigenous Peoples Day protesters, who see him as a colonizer.

When violence desecrates a blessed item or location, Catholics believe the attack literally “de-sacralizes” it, requiring the local bishop to rededicate or “reconsecrate” it for sacred use. Thus bishops typically reconsecrate any parish church where a homicide or attack occurs. But the idea that the archbishop performed an “exorcism” may be misleading.

Sometimes a bishop may also choose to destroy the old item, if it is ruined beyond anyone’s desire or ability to restore it, and bless a replacement. Archbishop Gregory Aymond of New Orleans recently burned the altar of a church in which one of his priests was caught engaging in illicit sexual activity with two women, and then reconsecrated a replacement altar that had belonged to a shuttered parish.

Scripture and tradition do not support the popular horror film notion of demons possessing an inanimate object.

Insofar as exorcism might enter into this sort of activity, implying some satanic influence in the violence, it will be a simple, or minor exorcism, which entails praying for protection against evil, rather than a major exorcism, which seeks deliverance from demonic possession. While Archbishop Cordileone may have prayed to protect San Rafael Mission from evil, he cannot pray to deliver it from demonic possession, as Scripture and tradition do not support the popular horror film notion of demons possessing an inanimate object.

These prayers did not seek to “expel a demon” from the inanimate object, but merely called down God’s blessing and protection upon the people and holy items within it. The Catechism of the Catholic Church distinguishes these two forms of exorcism in defining the ritual:

"When the Church asks publicly and authoritatively in the name of Jesus Christ that a person or object be protected against the power of the Evil One and withdrawn from his dominion, it is called exorcism. Jesus performed exorcisms and from him the Church has received the power and office of exorcizing. In a simple form, exorcism is performed at the celebration of Baptism. The solemn exorcism, called "a major exorcism," can be performed only by a priest and with the permission of the bishop. The priest must proceed with prudence, strictly observing the rules established by the Church. Exorcism is directed at the expulsion of demons or to the liberation from demonic possession through the spiritual authority which Jesus entrusted to his Church. Illness, especially psychological illness, is a very different matter; treating this is the concern of medical science. Therefore, before an exorcism is performed, it is important to ascertain that one is dealing with the presence of the Evil One, and not an illness." (Canon 1673)

Like other practices in Catholicism, the ritual of exorcism (from the Latin phrase “Exorcizo te, which means “I command you,” that begins one of the prayers used in the major rite) finds its root in the biblical example of Jesus Christ, who performed exorcisms as part of his miraculous healing ministry. Gospel references to Jesus acting as an exorcist, summarized below, never refer to possession of an inanimate object by an unclean spirit.

All three synoptic Gospels (Matthew, Mark, Luke) state that Jesus drove out many demons, and that he would not allow the demons to speak because they were intent on revealing his identity as “the son of God.” In all three Gospels Jesus also gives authority to his disciples to cast out unclean spirits or demons. In the Gospel of Luke, the 72 disciples Jesus sends out rejoice when they report upon their return that demons are subject to them.

In both Mark and Luke, Jesus drives out an evil spirit from a man who was in the synagogue in Capernaum; the evil spirit recognizes Jesus and cries out, “What do you want with us, Jesus of Nazareth? Have you come to destroy us? I know who you are—the Holy One of God!” Before departing with a shriek, the evil spirit shakes the man violently. The witnesses to this event respond in amazement that Jesus has authority over evil spirits.

All three synoptic Gospels also include the healing of the Gerasene demoniac. When Jesus comes face to face with the demoniac, the demon within him is agitated and cries out in alarm: “What do you want with me, Jesus, son of the Most High God? Swear to God that you will not torture me!” (In Luke's version, the torture consists of being sent into the abyss, or the pit, which is a place of incarceration.) We then learn that the man is actually possessed by many demons, called Legion, like an army of Roman soldiers. Jesus allows the demons to enter into a herd of pigs, which then all rush into the Sea of Galilee.

All three synoptic Gospels (Matthew, Mark, Luke) state that Jesus drove out many demons, and that he would not allow the demons to speak because they were intent on revealing his identity as “the son of God.”

In Mark and Matthew, Jesus heals a Syro-Phoenician woman’s daughter, who is possessed by an unclean spirit. He does so reluctantly because, as he explains to her, he has come to bring deliverance to the Jews, who deserve the benefits of the kingdom of God.

In all three synoptic Gospels, Jesus performs an exorcism on a boy after his disciples had tried unsuccessfully to do so. The evil spirit had caused the boy to be deaf and dumb and tried to harm him by throwing him into fire or water. Before it departs, the spirit throws the boy to the ground, and witnesses think that he is dead. Jesus explains that this type of demon comes out only with prayer.

Elsewhere in the synoptic Gospels, Jesus drives seven demons out of “Mary, called Magdalene,” heals a mute man who was possessed and cures a crippled and possessed woman in a synagogue on the Sabbath. In Matthew and Luke, Jesus responds to the Pharisees who accuse him of driving out demons by the power of Beelzebul: “How can Satan drive out Satan? If a kingdom is divided against itself, that kingdom cannot stand. If a house is divided against itself, that house cannot stand. And if Satan opposes himself and is divided, he cannot stand; his end has come.”

The Gospel of John has no examples of exorcisms—only references to people accusing Jesus of being possessed by a demon. But the frequent “good versus evil” metaphors include Jesus’ own words contrasting his ministry with that of Satan, “the father of lies.”

So what does the Roman Catholic Church teach about exorcism today? The practice, in addition to being subject to sensationalism, raises theological and pastoral questions. What is evil? Does evil primarily come from inside of us or from outside of us? Do the social sciences allow us to treat most examples of possession as various forms of mental illness? Is the practice of exorcism best forgotten, or is there any value in it?

The church has included the practice of exorcism (which was common in Judaism before Jesus) in its rites for the last 2,000 years. The church teaches that a possessed person is not responsible for his or her evil actions. There is at least one official exorcist for every diocese in the world, but his identity is a secret usually known only to the bishop. Among Christian churches, only Catholics, Eastern Orthodox Christians and Episcopalians still have a formal exorcism ritual.

A simple (or minor) exorcism, in which one asks God to protect a person or thing from evil powers, is part of the sacrament of baptism. The prayer to St. Michael the Archangel and the Our Father (“deliver us from evil”) also contain simple exorcisms. A major exorcism, or the formal expulsion of a demon (“I command you”) from a possessed person, is rare today, as many apparent instances of possession turn out to have a psychological explanation; and the church is careful to exhaust other possible explanations before proceeding to exorcism. The U.S. Conference of Catholic Bishops recommends that every diocese have a protocol for handling claims of demonic possession:

Is the practice of exorcism best forgotten, or is there any value in it?

"As part of the protocol, an assessment should occur to determine the true state of the person. Only after a thorough examination including medical, psychological, and psychiatric testing might the person be referred to the exorcist for a final determination regarding demonic possession. To be clear, the actual determination of whether a member of the faithful is genuinely possessed by the devil is made by the Church, even if individuals claim to be possessed through their own self-diagnosis or psychosis."

A major exorcism can be performed only by a priest with the express consent of a bishop. Signs of possession may include hatred of holy things, knowledge of strange languages, predictions of the future, strange noises, growling, flying objects, violent attacks and personality changes.

Pope John Paul II revised the Rite of Major Exorcism in 1999, issuing more stringent rules about when an exorcism may take place. Exorcists certainly do not expel anything from inanimate objects.

As for San Rafael Mission, Archbishop Cordileone may have used prayers of minor exorcism when he reconsecrated the site, but reporters were probably disappointed. It was not anything like it is in the movies.

[Listen to this next: Stories from a real-life exorcist consultant]