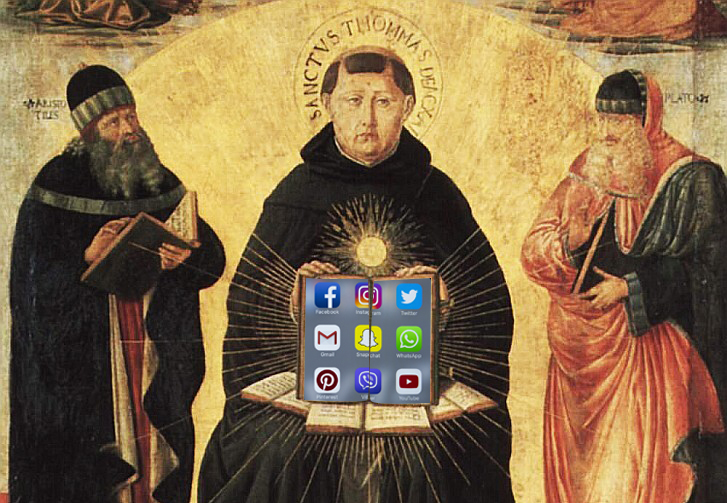 The Most Rev. Robert Barron serves as an auxiliary bishop in the Archdiocese of Los Angeles and founder of Word on Fire Ministries. A Chicago native and former seminary rector, he became known as a digital evangelist with his PBS-aired “Catholicism” (2010) documentary series and book, expanding from there into multiple social media platforms.

Bishop Barron, who appeared June 16 on America’s Jesuitical podcast, released the book “Renewing Our Hope: Essays for the New Evangelization” at the end of July. On Aug. 28, I interviewed Bishop Barron by email about his work in digital evangelization.

On July 9, you posted a strong video about the “Catholic culture of contempt” on social media, saying you preferred the conversation of atheists on social media to the sinful calumny of fellow Catholics attacking each other. How do you define this digital calumny, and why do you see it as an obstacle to evangelization?

I would define it by using the classical language of the ad hominem fallacy, which is to say, attacking the person making the argument rather than the argument itself. The problem with this sort of rhetoric is that it undermines both truth and love. As the church understands it, valid evangelization—as opposed to what Pope Francis characterizes as “proselytization”—always seeks the truth within the context of love. Hence the problem with the culture of contempt.

By contrast, what do you see as the best way for Catholics to conduct themselves in social media dialogues about faith-based topics?

I believe that before someone presses the “enter” button and posts something on social media, he or she should ask a simple question: “Am I doing this out of love?” Love means, of course, willing the good of the other. If one is doing it out of hatred, or a desire for revenge or a need to impress one’s friends, he should refrain from hitting that button. St. Augustine famously said, “Love and do as you will.” Apply his principle to your use of social media. Go ahead and say something strong and clear, but if and only if you are doing so in love.

Academics and journalists talk a lot about confirmation bias, by which emerging adults now listen only to voices which confirm their existing opinions, and of the so-called “cancel culture” that refuses to hear any dissenting opinions. If these trends indicate the direction of public discourse, what’s the value of still advocating for respectful disagreement, as you have done as a bishop in secular settings such as in your dialogue with Jordan Peterson and your talk at Google headquarters?

Bishop Barron: I believe that before someone presses the “enter” button and posts something on social media, he or she should ask a simple question: “Am I doing this out of love?”

Well, we have to fight that bias, for it is a mortal enemy of truth. And it locks us into very narrow spaces, both intellectually and morally. I take the warm friendship between G.K. Chesterton and G.B. Shaw as instructive. Those two great figures could not have been more different in conviction, attitude and personal style, yet they debated amicably up and down England for years and often shared a pint together at a pub after their appearances. How much saner and healthier that seems than our situation today. I’m actually glad you mentioned Jordan Peterson, for as you know, I took a good deal of flak from the left for even mentioning his name at a meeting of the U.S.C.C.B. My simple point was that it was a sign of hope that a man publicly discussing the Bible in an intelligent way was attracting large crowds of young people. But that was apparently too much for some. Though I clearly explained to my brother bishops that my observation was by no means an endorsement of every aspect of Peterson’s thought, one liberal commentator said that I was proposing an apologetics based on Jordan Peterson!

Who would be your pick for the patron saint of digital evangelization, and why?

Thomas Aquinas. In the context of his place and time—the medieval university—he exemplified many virtues of intelligent and constructive conversation that I’ve been describing. Thomas listened, always with respect, to an astonishing variety of voices: Plato, Aristotle, Cicero, Augustine, Origen, Dionysius, Moses Maimonides, Averroes, Avicenna—and on and on. He attended, of course, to his fellow Christians, but as this list suggests, he was more than willing to attend to pagan philosophers, Jewish thinkers, Arab scientists, etc. In tens of thousands of pages, Thomas never engaged in ad hominem attacks against his opponents. Rather, he responded to their arguments, in fact often presenting them more persuasively than they themselves did. To use our jargon today, he “steel-manned” rather than “straw-manned” their points of view.

You began evangelizing in the now-traditional medium of radio—the same place Fulton Sheen started his long career as a media evangelizer—before mastering social networking. What have you learned from your many years of work in media?

Bishop Barron: I’ve learned that evangelizing through social media is good and blessed work...Like any good thing, it can become corrupt and can be used by unsavory people.

I’ve learned that evangelizing through social media is good and blessed work. It has enabled the church to reach armies of people that they would never have reached otherwise. Like any good thing, it can become corrupt and can be used by unsavory people. But evil is always parasitic on the good, and hence “where sin abounds grace abounds the more.” So I would say to those intending to move into this world: Don’t get discouraged by the grifters, the trolls, the nay-sayers and the flamethrowers. Go out into the deep with courage and creativity.

The Road to Emmaus. I’ve loved this passage all my life, but I do think it has special relevance to our issue. Jesus draws near to two people who are walking the wrong way. He doesn’t judge them or correct them or scold them. He listens and actively seeks to know what’s on their minds. In a word, he exemplifies everything Pope Francis means when he talks about “accompaniment” in the work of evangelization. But then, at the propitious moment, he does indeed speak: “Oh how foolish you are, and how slow of heart to believe all that the prophets have declared!” Next, he does a deep dive into Scripture in order to help them understand the meaning of his life and work—at which point, their hearts catch fire. Accompaniment is not opposed to clear teaching, exegesis and proclamation. Both are indispensable to effective evangelization.

I would hope that people who use social media realize how the trolling and ad hominem attacks create a poisonous atmosphere, and that there might be more self-policing in this arena. This, may I say, applies to both left and right. Instead of engaging vile posts, people should ignore them or remove them. I also hope that the bishops might exercise more oversight of the social media space, for there are way too many people who, with no real credentials or ecclesial mandate, simply hang out a shingle and pretend to be spokespersons for the Catholic church. This has caused a good deal of confusion.

[Read this next: Q&A with Bishop Robert Barron on Jesuitical]

Sean Salai is the general assignment/culture reporter for The Washington Times.