Q&A with Bishop Robert Barron: Catholics can dialogue without compromising our beliefs 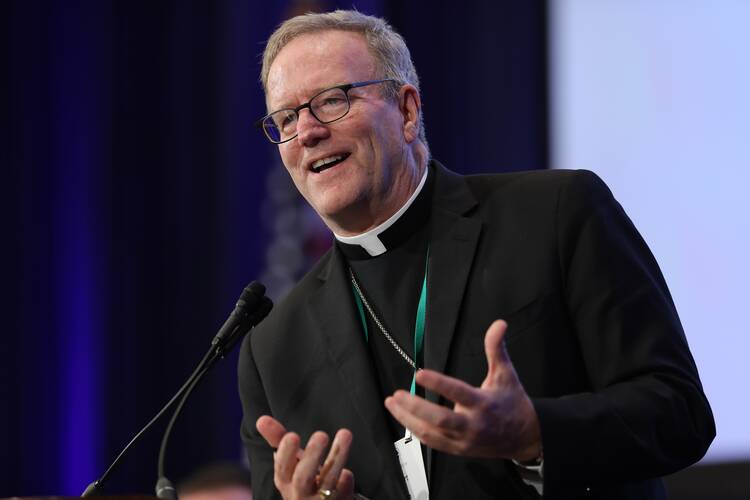 Bishop Robert Barron is an auxiliary bishop of the Archdiocese of Los Angeles. He is the founder of Word on Fire, a Catholic ministry that uses digital media as its primary avenue of evangelization. On June 18, Bishop Barron joined Ashley McKinless and Zac Davis, the hosts of “Jesuitical,” a podcast for young Catholics produced by America Media, to talk about the importance of engaging with people you disagree with, evangelization and the Black Lives Matter Movement. This interview has been edited for length and clarity.

AM: What does it mean to be in dialogue while still holding onto the entire Catholic tradition?

I don’t think it’s a matter of ever compromising what you hold. I think it is reaching out in good faith and with intelligence and answering questions. I like the terminology “steelmanning” someone’s argument. So, we strawman when we make a caricature of it and we knock it down. When you enter dialogue with someone, present their point of view as strongly as you can and say: “Here’s what I hear you saying, is that right? And here’s the rather persuasive case you're making, am I right about that?” And then take it from there. I don’t see any contradiction there, that you’re somehow compromising your own viewpoint. I’m with [St. John Henry] Newman. The church moves out confidently to a culture—assimilating what it can, resisting what it must.

ZD: Is there a kind of encounter or a dialogue that sticks out in your mind?

I like talking to atheists—a lot of the Hitchens, Dawkins, Sam Harris disciples. In those conversations, my own approach got honed. I try, I’m not always successful at it, but I try to acknowledge in the course of a conversation, to say to someone, “That last point you made, I think is really valid, and I hadn’t quite thought of it that way before.” That’s usually better than, “May I say, once again, why you’re wrong about this?”

That question came up at the ad limina visit when we were in the presence of Pope Francis. One of the other bishops raised it. The pope gave the answer that I would give, that what he means by proselytizing is bad evangelization. That is to say, it is the corruption of evangelization. It’s browbeating. “I got all the answers, you shut up and listen to me.” What I’m very resistant to is driving such a wedge between those things that anything like intellectual engagement is seen as proselytizing. I would define, in fact, apologetics as giving good answers to honest questions.

I’ve said many times that if you don’t think young people have a lot of questions about religion, you have not accompanied a lot of young people. I’ve been accompanying young people, at least digitally, for a long time. And trust me, they’ve got tons of questions about the faith. The church should be giving good, honest answers to those questions. I think that is key to evangelization.

But proselytizing is bad evangelization. It is browbeating. It’s arrogant, it’s hyper-rationalistic. But I don’t overdraw the distinction so that something like authentic apologetics is precluded.

AM: Young people are allergic to anything they see as inauthentic. When you talk about apologetics, what they typically hear from the church sounds like pre-packaged answers instead of genuine accompaniment with their questions. How do you try to meet them where they are when you’re engaging in apologetics?

By listening carefully. I’ve been on the Reddit Ask Me Anything twice. I simply came on as a Catholic bishop that loves talking to atheists and non-believers. The first time I did it, I was the third most popular of the year after Bernie Sanders and Jordan Peterson. The second time, I was the second most popular. Now, you have to wade through a lot of crap when you do a Reddit A.M.A., but in those tens of thousands of questions, there is a very clear pattern that emerges that especially young men have.

And I’ll tell you what [those questions] are. They are: “Does God exist? How do you know?” Second, the problem of evil: “If there’s a God, why is there suffering?” Third, “How do you know your religion is the right religion?” Fourth, homosexuality. Those are by far the biggest four questions. What you do is listen. That was a great boon for me to be on those things and say I have been able to hear, from tens of thousands of people, what’s on their minds when it comes to religion. And you never want to give a prepackaged answer. You want to give an answer that responds to the question that’s in front of you and to the person in front of you.

AM: You are often dealing with people who are very critical of the church and not always charitable toward you or other Catholics. How do you maintain your own spiritual hope and balance through all that?

Holy Hour. That is why I do it every day. When you’re in this sort of work and you’re out there in the culture, it is a spiritually dangerous place to be. You are under a kind of spiritual assault a lot. When you come out into the public space speaking about the Catholic Church today, it puts you in that dangerous position. The Holy Hour that I do every morning is key to whatever spiritual balance I find.

AM: In this current moment, amidst the pandemic and protests against the police, a lot of Catholics are looking to their priests and bishops for a sort of prophetic witness, and some feel like they’re not getting it from the church. How are you approaching this moment in your role?

ZD: A lot of Americans are reevaluating their relationship to racism during these difficult times. Has your perspective on race changed in recent months?

I think it’d be hard at this time not to be more deeply aware of all these ways we’re affected by what I’ve called the original sin of America that is deep in the cultural DNA. It’s deep in, if you want to use Jungian terminology, the collective unconscious. When I watched the George Floyd video, it was beyond appalling. I don’t understand how he could possibly be doing that to this man. What makes that possible? I think all of us are involved in a kind of reevaluation, an examination of conscience, both personal and societal.

I think it’d be hard at this time not to be more deeply aware of all these ways we’re affected by what I’ve called the original sin of America that is deep in the cultural DNA.

ZD: You place an emphasis on leading with beauty and evangelizing with beauty. The church has equated beauty with whiteness in a lot of ways. A lot of the art that we hold up is very eurocentric and white-centric. Are there other places we can that we need to be looking and we can look?

Absolutely. Not that I would claim any great expertise. I was trained in a certain area in a certain way and that’s why I wouldn’t know best. I would look anywhere there was something beautiful and good and true. Let’s celebrate it, use it.

AM: One thing Catholics have struggled with is seeing the Black Lives Matter movement as hyper-secular, while the fight for civil rights in the 1960s was led by Martin Luther King, a reverend. Have you thought about trying to engage in your kind of dialogue with members of Black Lives Matter?

I’d be happy to, if they’re open to conversing with me. [The Rev. Martin Luther] King is one of my great heroes. I think it made a huge difference that the leader of the civil rights movement in our country was a minister of the Christian gospel and was shaped by a deeply biblical imagination and led through nonviolence. Now, having said that, I’m more than happy to talk to anybody.

Do Black Lives Matter? Absolutely. With the central claim, I’m in radical agreement.

There were certainly bad expressions of that. Riots and so on. But at its best, it was a response of the heart to injustice. People were just righteously indignant. And I say, that’s the right response. That’s what King was able to channel: a biblical, prophetic, righteous indignation. So I’m all in favor of that. Aquinas defined anger as an irrational desire for vengeance. That’s the deadly sin of anger. And I think you did see some of that in the extreme reactions. But righteous indignation? I’m behind it. A hundred percent.

@zacdayviszdavis@americamedia.org
Provide feedback on this article
Join the conversation: Login or create an account
Before you can comment, you need to update your profile to include your first and last name, as required in our comments policy. Then reload this page and you'll be set up for commenting. Update your profile