My father lost his Catholic faith—but God never left him 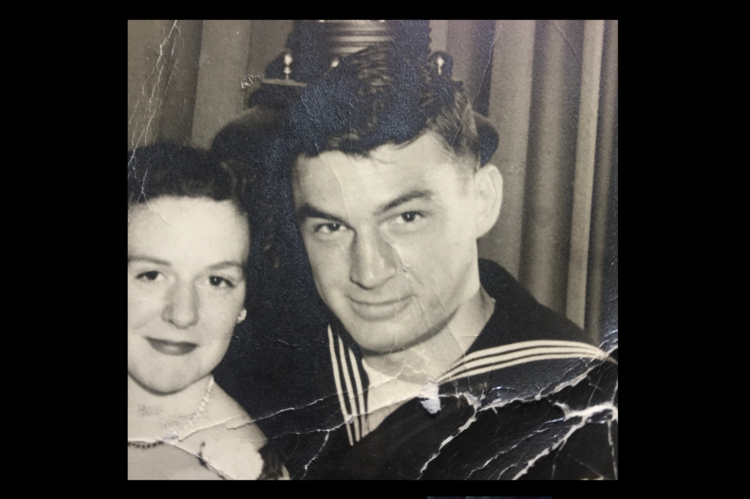 Valerie Schultz’s parents at the prom in 1949, which Mr. Schultz returned for on a short leave from the Navy to attend with his pen-pal sweetheart and future wife. (Provided by Valerie Schultz)

My dad said his prayers every night, even when he was not sure there was a God. He had had a serious heart attack in his 40s and afterward stopped going to church with our family. When I was a kid, he had been a regular lector, so this was a jarring change. “The older I get,” he told me once while driving me to the airport to go back to college, “I think six feet under is six feet under.” I had plenty to think about on my flight back to a Catholic university.

My dad rejected his Catholicism as firmly as I was embracing mine. Over the years, we had many discussions about religion and God, even as his heart was failing for good. On the day he died, my dad turned down the opportunity for confession. This made me sad. A priest friend anointed him while he drifted away from us, and I asked God to enfold my doubting dad.

Related: ‘Fatima’ scores a point for faith by exploring doubt

Still, he always said those nightly prayers. He could not explain why.

Years later, however, some old correspondence expressing my young father’s faith have helped me trace some explanation. After my folks died, my sister held onto a bin full of random letters that our parents had written to each other before they were married. When I retired, I offered to organize them by date and to transcribe them for the rest of the family. It has been a bigger task than I expected but also a blessing.

Still, he always said those nightly prayers. He could not explain why.

The letters date from 1948, when my dad joined the Navy after graduating from high school. He became a signalman on a destroyer that mainly patrolled the Mediterranean Sea. The letters are penned to a girl he liked back home in New Jersey, who was still a senior in high school. He wrote her a lot of letters because she wrote back. She was pretty and funny and had beautiful penmanship.

As I began to type the letters, I felt as though I were meeting these two teenagers for the first time. I fell into the lingo of their youth. Sometimes I would come away from my laptop feeling like I had time-traveled, blinking to get back to my century. The letters contained references to friends I did not recognize, and there was no one to ask for more information: Everyone was gone. I typed my way to 1949.

I would come away from my laptop feeling like I had time-traveled.

My dad wrote the following after shore leave in Italy on Palm Sunday:

I went to church yesterday in Leghorn, [Livorno] beings it was Palm Sunday and for a change, I enjoyed myself. See if you can picture this, five of us went to a church that had been hit heavy by bombs during the war and has been only partly repaired. There were about forty other Italians in the church and about twenty kids. Well, I got the idea of giving these people something to remember us by, so we bought all of the Palm that an old lady was selling in the vestibule and passed it out to all of the children and grownups. They appreciated it very much because the people looked at us several times during the sermon as if the priest was speaking of us, even though none of us could understand Italian.

I can picture it.

He described an audience at the Vatican with Pope Pius XII:

While we were in Naples I took a three-day tour to Rome, which cost twenty-three dollars, but this was well worth it because it included all meals and transportation and a very nice hotel room. While in Rome we visited such places as the Coliseum, the Vatican Art Galleries, St. Peter’s and St. Paul’s churches, the Catacombs, Pantheon, and most important of all we had an audience with the pope himself. There were about thirty in our group and we each had a chance to speak with the pope personally, something that not very many people have ever done or will ever do in their life. Even though I do not consider myself religious, it struck me very deeply to see this great man and is something that I will not forget in a hurry.

I would love to know what my dad and the pope talked about.

I would love to know what my dad and the pope talked about. Family lore told of another sailor at the papal audience shouting, “Three cheers for the pope!” followed by a lusty “Hip, hip, hooray!” These Americans discombobulated the curia present, but my dad said the pope liked it.

Related: Pete Holmes needed his life to fall apart to lose God (and find him again)

The father I knew had written pretty introspective letters for a not-quite-19-year-old:

There is one thing though that I have to admit, I’ve changed in these past few months. I don’t know when I first noticed it, maybe it was on a stormy night on the bridge with the rain beating down heavy but not quite leaking through our foul weather jackets or maybe it was on a sunny afternoon when I was sending out a message by flashing lights or perhaps it was when I was sitting in a club in Tripoli, Greece, or Italy. It is not mainly a physical change, although it is a little bit, but a mental one. You begin to think plainer and what you might call “a little more grown up.” You don’t take anything for granted anymore, especially in Religion. I am getting awfully bad when it comes to going to church. When I think that I didn’t go to Mass, Christmas, New Year’s, or this morning, I can’t help feeling a little low, but if I am home on a weekend, I will have to go to Mass on a Sunday with you, that is if it is all right with you. That is another thing I will be looking forward to besides our date.

My dad managed to get leave in June in time to take my mom to her senior prom, to attend her high school graduation and to officially declare his love. The letters get mushy after that. The rest is history.

At the end of his life, God was surely with him.

These glimpses of my dad’s long-ago Catholic experiences touched my heart. As he said, he was not religious, but he was a thinker. And at the end of his life, God was surely with him. One of the last things he said before he left was “It’s incredible. It’s unbelievable! They’re all around me.” He was looking toward the window, into the distance, distracted, surprised, smiling. Suddenly he looked me square in the eyes and said, confidentially, “It’s scaring the crap out of me.” Before I could respond, his attention reverted back to whatever miracle he was witnessing in the clouds.

That was my dad: plainspoken, irreverent, quizzical and, in his own way, faithful. We have the letters to prove it. But really, even stronger proof rests in the legacy of his unconditional love.