Review: ‘Fatima’ scores a point for faith by exploring doubt 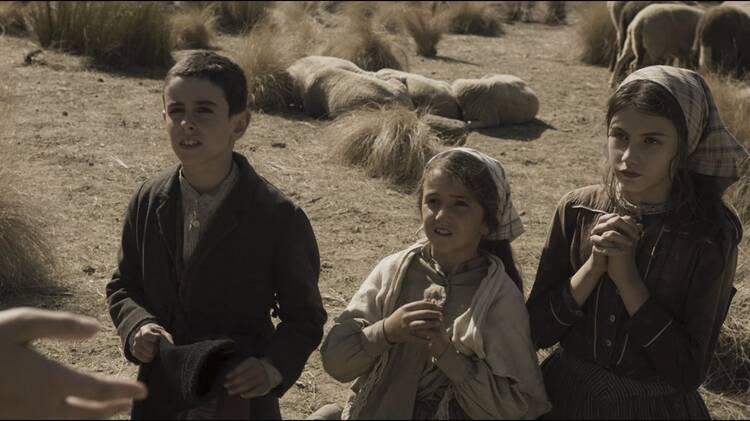 “Fatima” is a bit of a high-wire act. A dramatic account of the Marian visitations experienced by three Portuguese peasant children during World War I, it gives both the innocent faithful and the innocently faithless their due. It balances reasonable questions with unassailable faith. And it treats with enormous delicacy what has, for more than 100 years, made the miracle of Fatima fascinating even to those who do not believe in miracles—namely, the “mysteries” or prophesies of the Virgin Mary, related to the children in 1917 and kept secret till 1960.

Although the film travels back and forth between Fatima and 1989 Coimbra—where the aged, cloistered Sister Lúcia (Sonia Braga) is being interviewed by the fictional, skeptical Professor Nichols (Harvey Keitel)—the director Marco Pontecorvo is not interested in portraying a past of faith and a present of doubt. The script by Valerio D’Annunzio, Barbara Nicolosi and Pontecorvo himself (son of director Gillo, of “The Battle for Algiers”) may go slightly overboard in ennobling the peasantry of Fatima. Lúcia’s mother, Maria (Lúcia Moniz), for instance, is saddled with more than her share of rigid dialogue.

But the politics are front and center: The country had overthrown its constitutional monarchy only in 1910, and there was a great deal of anticlerical sentiment emanating from Lisbon. Having thousands flock to Fatima to see what official Portugal viewed as a superstitious apparition was not good for anyone, especially a town whose sons were off fighting in a war that had already raged for three years, and whose survival as a community seemed precarious enough.

Young Lúcia—the marvelously expressive Stephanie Gil—is first visited by the Angel of Peace (Ivone Fernandes-Jesus), who conjures up for her visions of the war in which Lúcia’s brother is fighting, and which is characterized as an insult to God. One of the prophecies of the Blessed Virgin (played here by Joana Ribeiro) was that another greater war was to follow if mankind did not correct its ways—World War II being the obvious conclusions to draw from the secrets, as revealed.

Venturing into the kind of territory where “Fatima” dwells involves risk, and a certain amount of risk avoidance.

Whether the Vatican has ever disclosed the secrets fully is a subject of debate, but “Fatima,” by way of the visions visited upon the children, alludes to the atomic bomb, an apocalyptic hellscape and a papal assassination. The attempt on the life of Pope John Paul II in 1981 has been seen by some as a fulfillment of that particular prophesy, but it isn’t a question that comes up during Professor Nichols’s interrogation of Sister Lúcia.

What does come up, however, makes for the most interesting moments of the film—much if which is otherwise devoted to the sufferings of little Lúcia, Jacinto and Francisco (Alejandra Howard and Jorge Lamelas, both wonderful) as they try and often fail to convince the townspeople of what they have seen. What Professor Nichols wants to know from the implacable Sister Lúcia concerns the ontology of miracles: Why, he asks, do divine apparitions always conform to the iconography of the culture in which they appear? They are manifest in a way that people can easily understand, she says. (To the film’s credit, both Ms. Fernandes-Jesus and Ms. Ribeiro could pass for Aramaic.)

Why, Nichols continues, would stigmata appear on the palms of the hands when it is well known that Roman crucifixion involved the binding of the wrists? Sister Lúcia has no answer to offer. There is no answer. As was the case with the locals in Fatima who chose not to believe, nothing she says will ever convince Nichols of what happened to her and Jacinta, who were the only ones who could see and hear the Virgin, and Francisco, who could only see her. But by entertaining—and frustrating—doubt, Lúcia scores a point for faith.

Venturing into the kind of territory where “Fatima” dwells involves risk, and a certain amount of risk avoidance. Portraying the visions of the three children in purely visual terms allows Pontecorvo to include any number of possibilities within the mysteries of Fatima. By casting as the Blessed Virgin an actress like Ribeiro—very beautiful, but ethnically ambiguous—he invites no arguments. And by acknowledging the humanity of the humans who have so arguably offended God, he keeps them human, and thus part of a moral argument—notably, against the causes of fascism and communism, both of which were about to bloom in 1917 and found their own reasons to dismiss the events at Fatima.

Whether intended or not , there is even a capitalism joke toward the end of the film. A little boy has been regularly selling rosaries at the site of the visitations (“Rosaries, six cents!). When Jacinta announces to the crowd that the Virgin has identified herself as “The Lady of the Rosary,” the little salesman adjusts accordingly: “Rosaries, now 10 cents!” Like the faceoff between Nichols and Lúcia, it is a welcome moment of something close to mirth in a movie that takes its subject very seriously.