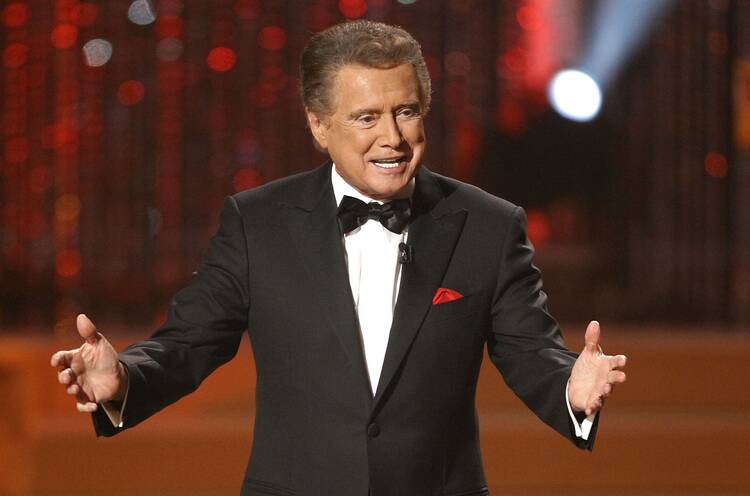 In this June 27, 2010 photo, host Regis Philbin is seen on stage at the 37th Annual Daytime Emmy Awards in Las Vegas. Philbin, the genial host who shared his life with television viewers over morning coffee for decades and helped himself and some fans strike it rich with the game show “Who Wants to Be a Millionaire,” died on Friday, July 24, 2020. (AP Photo/Eric Jamison)

Regis Philbin, the spirited stalwart of daytime television, died in Greenwich, Conn., on July 24. He was 88.

The death of the loquacious personality elicited an outpouring of praise from colleagues and friends. “Regis is in the same category as [Johnny] Carson,” wrote former late night television host David Letterman on Twitter. “When he retired I lost interest in television. I love him.”

Former co-host Kelly Ripa from “Live With Regis and Kelly” called Philbin “the ultimate class act, bringing his laughter and joy into our homes everyday on [Live!] for more than 23 years.”

New York City mayor Bill de Blasio said that Philbin “brought warmth, humor and wit into so many homes,” while President Donald J. Trump proclaimed him as “[o]ne of the greats in the history of television.”

Regis Philbin's electric personality and expert ability to communicate on the same level as his audience was captivating.

As a child, I was abnormally fixated on Regis Philbin, who was, at the time, a ubiquitous presence on network television. His electric personality and expert ability to communicate on the same level as his audience was captivating. He embodied the essential qualities of a television presenter: engaging, knowledgeable and light on his feet. I will always remember the generosity and respect he and his wife showed towards a 15-year-old admirer.

I met Regis Philbin three times over the past seven years. My first meeting with him was with his wife, Joy Senese, after a concert in Lincoln, R.I., on March 8, 2013. Our second encounter was on December 16, 2015, outside the Lincoln Center premiere of the Will Smith film “Concussion.” The last time I met Philbin was in June 2016 outside of a Don Rickles show in Westbury, N.Y. (Rickles would pass the following year.)

In a career spanning over five decades, Philbin established himself as a veteran talent of the talk show format with his trademark quips and animated demeanor. Born to a Catholic family in the Bronx (and reportedly named after the Jesuit-run Regis High School), Philbin began his television career in 1955 as a page on “The Tonight Show” with Steve Allen. After working as a journalist, he hosted his first program, “The Regis Philbin Show,” beginning in 1961. But it was his late 1960s stint as sidekick to ABC talk host Joey Bishop that would garner Philbin national attention.

As a host of game shows like “Who Wants to be a Millionaire?’, a frequent guest of David Letterman and a longtime fixture of the ABC morning lineup with Kathie Lee Gifford and later Kelly Ripa, Philbin broke the world record in 2011 for most hours spent on U.S. television. (That’s over 16,700 hours.)

In a career spanning over five decades, Regis Philbin established himself as a veteran talent of the talk show format with his trademark quips and animated demeanor.

An alumnus of the University of Notre Dame, where his funeral service will be held, Philbin lived a life informed by his Catholic faith.

“I went to Notre Dame and those days you had to go to the Mass at least three times a week during the week. … I think I learned a lot from that. It made me a better person,” said Philbin in a 2014 interview with Fox News.

A noted supporter of Catholic education, Philbin donated $500,000 in 2000 to Cardinal Hayes High School in the Bronx, which then named its auditorium after him. At a rededication Mass in 2010, Cardinal Timothy Dolan, archbishop of New York, praised Philbin’s contributions.

“[Christ] asks us to be light to the world. Regis does that,” said the cardinal.

His funeral service will be held at the Basilica of the Sacred Heart at Notre Dame University in South Bend, In. Interment will follow at Cedar Grove Cemetery.

Ryan Di Corpo is a former Joseph A. O'Hare, S.J. Fellow at America.