Explainer: 5 takeaways from the Vatican’s new document on parish reform 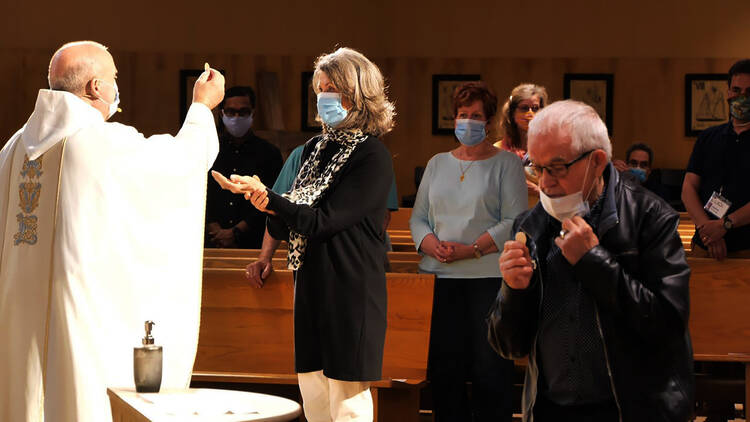 The Congregation for Clergy in Rome issued new instructions on parish reform on July 20, proposing ways to restructure parishes that face priest shortages and financial difficulties. The document states that the goal of parish reform is to move parishes from a “self-preservation” model to an evangelizing one.

The document, entitled “The pastoral conversion of the parish community in the service of the evangelizing mission of the church,” focuses primarily on questions of parish structure, rather than spiritual conversion or the specifics of evangelization. The document provides concrete guidance on grouping parishes together, stresses the separation between the roles of priests and laypeople and insists that only priests lead parishes. It argues that this distinction is vital to help each person serve the church as best accords with his or her own vocation. While stressing the uniquely secular dimension of the laity’s vocation in the world, it comes across as a dictum that when it comes to parish life, priests are to lead and laypeople to follow.

In an article headlined “Rome stops reforms,”a Catholic news agency in Germany, KNA,interpreted the document as an effort to halt proposed church closures in Germany. A canon lawyer quoted in the article called the document “thoroughly clerical” and said it “answers today’s questions with yesterday’s answers.”

The document provides concrete guidance on grouping parishes together, stresses the separation between the roles of priests and laypeople and insists that only priests lead parishes.

Here are five main takeaways from the new instruction:

1. Parishes no longer play as prominent a role in communal life.

According to the new instruction, the current model of parishes no longer measures up to most people’s expectations: Whereas the parish church was once a community’s primary gathering space, people now have many other places—in person and virtual—to gather, weakening their commitment to their geographic neighbors. (The document makes no mention of the way the coronavirus has affected relationships between neighbors or parishioners.)

As a result of this change, the document says, “any pastoral action that is limited to the territory of the Parish is outdated, which is something the parishioners themselves observe when their Parish appears to be more interested in preserving a nostalgia of former times as opposed to looking to the future with courage.” A missionary parish, rather than remaining focused on preserving the existing community, is “‘called to reach out to everyone, without exception,’ particularly the poor.” The document says that priests, deacons and consecrated people are often the first to show compassion to the poor.

2. Do not close parishes: Restructure them.

The document proposes that the way to move toward a more missionary church will involve restructuring, rather than closing, parishes, in order to make better use of dioceses’ dwindling resources. Bishops are urged not to “suspend” or close down parishes because of a lack of priests or funds or to close multiple parishes in a single ordinance. Instead, if a parish must be closed, the bishop should explain his reasons thoroughly.

The document recommends keeping church buildings open when possible, in order to prevent traumatizing the faithful who have “profound emotional and nostalgic bonds” to them.

A missionary parish, rather than remaining focused on preserving the existing community, is “‘called to reach out to everyone, without exception,’ particularly the poor.”

Rather than closing down churches, the document recommends that the bishop gradually form groups of parishes led by one priest who serves as the bishop’s representative. This “moderator” priest may work and live in community with other priests who serve as parochial vicars, either for each individual parish or for one area of ministry (e.g., youth ministry, ministry to the homebound) across all the parishes in the group.

When forming these groups, the bishop is to “take into consideration the homogeneity and customs of the inhabitants, together with the common traits of the area, in order to foster a close relationship between Parish Priests and other pastoral workers.”

3. Parishes should be led by priests, not laypeople.

The instructional document stresses that it is necessary to avoid the “clericalization of pastoral activity.” It states that laypeople are the “protagonists of evangelization” and that pastors are charged with helping the laity grow in that mission. Avoiding the “clericalization of pastoral activity” has a double meaning in the document: Neither should all pastoral or missionary activity be limited to the pastor, nor should laypeople be “clericalized” by taking on roles traditionally reserved to clerics.

The document stresses this latter point repeatedly, saying that “the particular office of Parish Priest” may not be entrusted to a group composed of clerics and laypeople, as has been proposed in some places. While the document does not define the roles intrinsic to the “office of Parish Priest,” one obvious example would be that laypeople cannot perform sacraments reserved to priests.

The document also limits non-ordained people from serving in any leadership roles that might be seen as equal to a priest. It specifies that names like “team leader” should be avoided for such people because they “convey a sense of collegial government of the parish.” Likewise, the instruction says that parish administrators should not be called “pastor,” “co-pastor,” “chaplain,” “moderator,” “coordinator” or “parish manager,” “inasmuch as they have a direct correlation to the ministerial profile of priests.” Neither are expressions like “entrust the pastoral care of a parish” permitted because they pertain to priests’ ministry and are “not in conformity with [non-priests’] vocational identity.”

Rather than closing down churches, the document recommends that the bishop gradually form groups of parishes led by one priest who serves as the bishop’s representative.

The document also states that the job of a parish administrator, a role becoming more common in areas facing priest shortages, is “essentially transitory” until a new parish priest arrives. “It is illegitimate for the diocesan Bishop to appoint a Parish Administrator and to leave him in that position for an extended period of time, more than a year, or even permanently, in order to avoid the appointment of a Parish Priest,” the document says.

According to the document, having a parish administrator relegates the parish to a “self-preservation” model rather than enabling it to undertake far-reaching evangelization plans.

In the absence of a priest, though, the document says that the bishop “may entrust the pastoral care of a Parish”—utilizing a term discouraged elsewhere in the document—“to a deacon, to a consecrated religious or layperson, or even to a group of persons,” including duties like celebrating the Liturgy of the Word on Sundays and holy days of obligation, baptism, the celebration of funeral rites, assisting at marriages and preaching outside of Mass. Persons entrusted with such a role are to operate “under the direction and responsibility of the Parish Priest,” the document says, and these cases are to be considered exceptional. It is clear that this pastoral care is not to be understood as equivalent to the priestly role.

4. Laypeople can serve on advisory councils.

The document makes two provisions for advisory councils in parishes: It mandates that each parish have a finance council and recommends that each has a pastoral council. Both, the document stresses, are purely consultative and report to the parish priest.

The finance council should be made up of at least three Catholics who are experts in financial and legal matters, chosen by the priest or elected in some way by the parish. They do not need to be parishioners, and one person may serve on multiple parishes’ committees. The document calls for “transparency” in financial matters but does not detail any transparency measures beyond submitting an annual report to the local ordinary or bishop.

The pastoral council should be concerned with evangelization rather than “ecclesial organization,” according to the document. The instruction says that the priest should avoid the extremes of always presenting the council with already-made decisions or with serving as “only one of the members, deprived de facto of his role as Pastor and Leader of the community.”

5. Offerings for sacraments cannot be mandated.

Parishes should not treat recommended offerings for sacraments like weddings or Masses said for a person’s intention as fees or taxes, a common practice in the United States. Instead, the document recommends receiving donations anonymously so that parishioners can donate as they are able. For parishes concerned this could cut down on much-needed revenue, the document urges parish leaders to “sensitize” their communities to the needs of the parish and for pastors to live simply as an example of responsible stewardship.

Taken as a whole, the document offers concrete recommendations for approaching the complex question of parish restructuring in a time when the economic downturn and pandemic shutdowns have constrained diocesan budgets. But its insistence on the leadership role of priests in governance and nonsacramental ministry, in addition to its restriction on parish administrators with indefinite appointments, raises questions for churches like those in the Amazon region, where, for example,two priests serve an entire diocese in Guyana. Likewise, the restriction on fees for sacraments, which, like many of the other guidelines, already existed, has the potential to cut a main source of funding for U.S. parishes—if it is enforced.

More: Vatican / US Church / Women in the Church