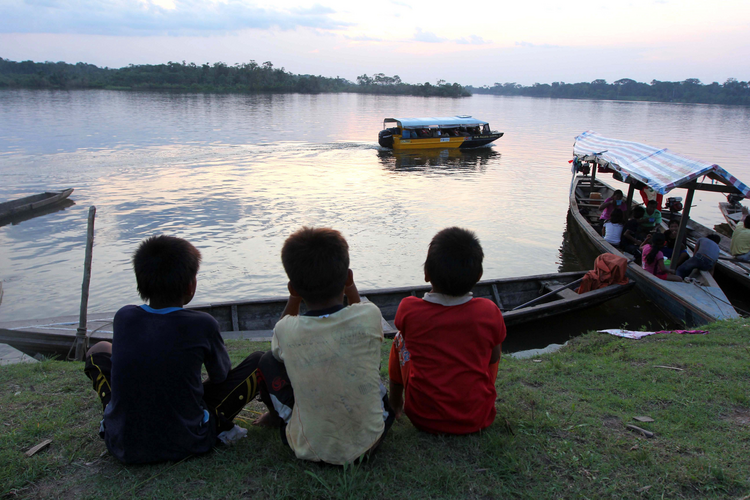 The first significant implementation of last October’s Synod on the Amazon took place on June 29, the feast of Sts. Peter and Paul, with the founding of the Ecclesial Conference of the Amazon, a new transnational church structure that is intended to implement many of the synod’s proposals.

The decision to create the conference was made in a virtual assembly held on June 26 and June 29 by the Assembly for the Project of Constitution of the Ecclesial Conference of the Amazon. Cardinal Michael Czerny, S.J., who participated in the virtual assembly, described the decision as “historic” in a telephone interview with America.

He recalled that Pope Francis, in his post-synodal apostolic exhortation, “Beloved Amazonia” (“Querida Amazonia”), had called on the synod’s participants to start implementing its proposals. He said they have begun to do so less than eight months later by creating this new transnational church structure covering the nine countries of the region: Brazil, Bolivia, Colombia, Ecuador, Guyana, Peru, Surinam, Venezuela and the territory of French Guiana.

Cardinal Czerny highlighted the fact that “the energy and the effort for this came from the region itself.”

The Ecclesial Conference of the Amazon aims to be “an effective channel for taking up, from within the territory, many of the proposals that emerged” at the Pan-Amazonian synod.

“It’s wonderful,” he said. “It’s a sign of growth, of development, of renewal, of doing something new.” He explained that “this structure will be responsible for the implementation of many of the synod’s proposals. It becomes a structure capable of doing what the Aparecida conference asked for and what Pope Francis called for when he addressed the Brazilian bishops in 2013, namely a coordinated pastoral effort.”

The assembly announced the creation of the new conference in a statement issued on June 29 and signed by Archbishop Miguel Cabrejos, O.F.M., president of the Latin American Episcopal Council, known by its Spanish acronym, CELAM; and Cardinal Cláudio Hummes, O.F.M., president of REPAM, the Pan-Amazonian Ecclesial Network: “In these difficult and exceptional times for humanity, when the coronavirus pandemic is strongly impacting the Pan-Amazon region and the realities of violence, exclusion and death affecting the biome and its inhabitants clamor for an urgent and imminent integral conversion, the Ecclesial Conference of the Amazon seeks to be good news and a timely response to the cries of the poor and of our sister Mother Earth.”

According to the assembly’s statement, the E.C.A. aims to be “an effective channel for taking up, from within the territory, many of the proposals that emerged” at the Pan-Amazonian synod and to serve “as a nexus for encouraging other church and socio-environmental networks and initiatives at the continental and international levels.”

The synod fathers approved the proposal to bring such a body into existence in their final document (No. 115) when they called for a bishops’ “organism that promotes synodality among the churches of the region, helps to express the Amazonian face of this church and continues the task of finding new ways for the evangelizing mission.”

Pope Francis, in paragraph 4 of “Beloved Amazonia,” called on “the pastors, consecrated men and women and lay faithful of the Amazon region to strive to apply it.”

Brazil is the epicenter of the Covid-19 pandemic in Latin America. Rural communities have it worse.
Eduardo Campos Lima

The statement highlighted the fact that the assembly’s composition “reflects the unity in diversity of our Church and its call to ever greater synodality,” describing the assembly as “a novelty of the Spirit” and “part of the hope-inspiring kairós that continues the synodal way of opening new paths for the Church and for an integral ecology in the Pan-Amazon region.”

Participants at the virtual assembly that founded the E.C.A. included Archbishop Cabrejos and Cardinals Hummes and Pedro Barreto, S.J., vice-president of REPAM; and one bishop from each of the nine countries of the Pan-Amazonian region (though Brazil had two bishop representatives because of its size).

According to the statement, the assembly elected Cardinal Hummes, a Brazilian, as its president, and the Most Rev. David Martínez de Aguirre, O.P., from Peru as vice president.

It elected to the executive committee the following persons: the Most Rev. Eugenio Coter of Bolivia as bishop representative of the Conferences of Bishops of the Amazonian territory, along with the presidents of the regional church bodies that will accompany this process organically and three designated representatives of original peoples: Patricia Gualinga of the Sarayakú Kichwa people from Ecuador, Sister Laura Vicuña Pereira of the Kariri people of Brazil and Delio Siticonatzi of the Asháninka people from Peru.

Correction June 30, 2020: Because of an editing error, a statement issued by the Assembly for the Project of the Constitution of the Ecclesial Conference of the Amazon was incorrectly attributed to Vatican officials. Corrections were made through the updated report.

Correction July 1, 2020: An earlier version of this story described a comment from Pope Francis as directed to the Latin American Episcopal Council. Pope Francis was actually speaking with Brazilian bishops only.