Brazil is the epicenter of the Covid-19 pandemic in Latin America. Rural communities have it worse. 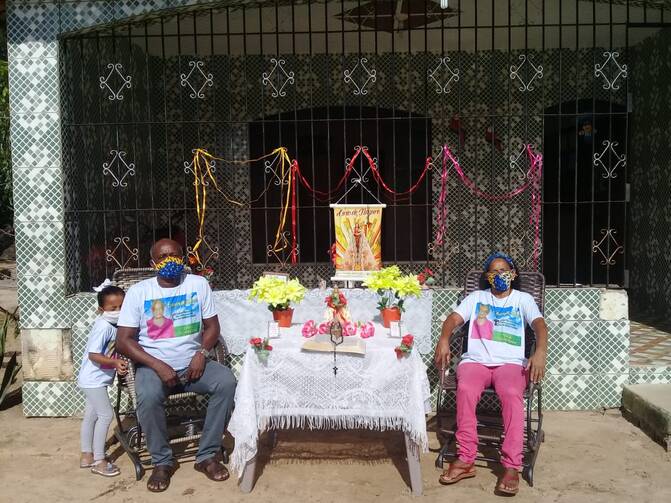 Residents of the quilombola community of Itacoã-Miri, in Pará State, celebrate the festivity of Círio de Santa Maria. The traditional procession was cancelled, so residents stood in front of their homes as a motorcycle circulated with a statue of the Blessed Mother. Photo by Elisa Monteiro.

With almost 400,000 confirmed cases and more than 24,000 deaths caused by Covid-19, Brazil has become the epicenter of the coronavirus pandemic in Latin America. If health care services in major cities like Rio de Janeiro and Manaus are on the verge of collapsing, conditions in traditional rural communities are even more distressed.

That is certainly the case in the quilombola settlements, communities founded by African slaves who fled captivity before the abolition of slavery in 1888. The name comes from the Kimbundu Bantu word, quilombo, for “war camp.”

There are about 3,000 officially recognized quilombola communities in Brazil, but the actual number is much higher, according to researchers. They are often found in hard-to-reach regions of Brazil where infrastructure and social services are extremely weak. Most of the quilombola settlements are located in the northeast of Brazil, especially in Maranhão State, with 734 settlements, and Bahia State, with 469. Pará State in the north of Brazil is home to 403 communities.

Since the beginning of the pandemic, Catholic missionaries and pastoral commissions that work with quilombolas feared the consequences of the coronavirus reaching their villages. By April the first cases of Covid-19 were confirmed. So far, the National Coordination of Black Rural Quilombola Communities (known as Conaq, in Portuguese) counts 197 confirmed cases of Covid-19 in quilombola settlements, with 46 deaths.

The isolation of quilombola settlements in Brazil can be a positive—it has kept the coronavirus at bay—“but they can’t count on government health care services and have to deal with a deep racism.”

One of the affected communities is Itacoã-Miri, close to Belém, the capital city of Pará State, in the Amazon. After an elderly community member died in April, many families panicked, said resident Élida Monteiro. “His body was taken straight to the cemetery, and there wasn’t a proper funeral. His family felt abandoned by the community...that people didn’t want to pay respects to him,” she said.

As more people got sick, everything changed in Itacoã-Miri, even religious life. Most of its 185 families are Catholic and regularly organize celebrations in honor of saints. Since the outbreak, Itacoã-Miri has had to adapt. “The other day we had the feast of St. Mary, the patroness of families. One of the organizers took the statue on a motorcycle and passed in front of all houses as if it were a procession,” she said.

But those precautions cannot be taken by people who still have to work in the city or those who must travel to Belém to access the small financial assistance provided by the federal government during the pandemic. A little more than $100 each month, the assistance is expected to end in June. The risks are huge for those who leave the settlements. “We don’t have any local health care assistance. In Belém, hospitals are overcrowded,” Ms. Monteiro said.

The situation is the same in other rural parts of the country. “Quilombola communities are very fragile,” said Givânia Silva, a founding member of Conaq. Their isolation can be a positive—in this case it has kept the coronavirus at bay—“but they can’t count on government health care services and have to deal with a deep racism in all levels [of social services],” she said.

According to Ms. Silva, many quilombola communities have a significant number of elderly people and comorbidities like diabetes and hypertension are common. Conaq has sponsored campaigns to raise awareness of precautionary measures, but it has strong counter forces to overcome in that effort.

Many quilombola communities have a significant number of elderly people and comorbidities like diabetes and hypertension are common.

“Most quilombola communities were traditionally Catholic, but in the past few decades there has been a strong advance of evangelical Christians in many of them,” Ms. Silva said. “Those people are now providing a disservice concerning the pandemic.”

President Jair Bolsonaro was strongly supported by evangelicals in the 2018 presidential election, and most leading pastors in Brazil still back him. Since the Covid-19 pandemic began, Mr. Bolsonaro has been minimizing its seriousness. He rejected the idea of imposing social distancing measures. Top evangelical leaders adopted the same policy, and some of them kept holding church services until they were forbidden to continue by Brazil’s judiciary.

“They can help to influence people in quilombola communities against the recommendations given by science and health care authorities,” Ms. Silva said.

Despite such influences, most communities have been taking precautions, according to Sister Ângela Biagioni, a member of the Congregation of the Sisters of Jesus Good Shepherd. She has worked with quilombolas for decades in the Vale do Ribeira region shared by the states of Paraná and São Paulo.

“A community in the city of Eldorado even asked the help of the local [state prosecutor’s] office to secure its isolation, given that the number of hunters, fishermen and illegal miners getting into their lands had grown very much,” she told America.

In a very isolated area in the Amazonian State of Rondônia, the quilombola community of Pedras Negras, composed mainly of elderly people, has been making a strong effort to keep the coronavirus from reaching the settlement. Manoel Santiago, at 33 one of the younger residents of Pedras Negras, was visiting Porto Velho, the state capital, when the pandemic reached Rondônia State. He decided to stay put for the duration of the quarantine, worried that he might bring the virus back to Pedras Negras.

“The nearest health care clinic in the region sends a doctor to see us only once a month. There’s no emergency medical service in the area.”

Mr. Santiago said that most people suffer from diabetes, hypertension or both in Pedras Negras. “If the disease hits our community, it’ll be over,” he said.

“The nearest health care clinic in the region sends a doctor to see us only once a month. There’s no emergency medical service in the area,” Mr. Santiago said. A trip to the nearest city takes at least three hours, two of them by boat on the Guaporé River.

Because of its isolation, Pedras Negras is visited by a priest only a few times each year. The last visit was in December 2019 before the pandemic began. It is impossible to say now when the next visit can be expected.

The neighboring quilombola community of Santo Antônio do Guaporé is a little closer to an urban area. In an emergency it would take more than 90 minutes to reach a health care clinic in the city of São Francisco, so Santo Antônio residents are just as concerned about their safety.

“It’s a region visited by many tourists interested in sport fishing,” Ronaldo Barros, a community member said. “This kind of activity has been restricted by the state government, but we talked to local hotel owners anyway and asked them not to accept newcomers.”

He said people currently only leave this community of 76 people to access federal aid in the city. “But everybody always wears a face mask.”

Sister Barbosa has worked with quilombola communities for 15 years. She worries that the precariousness of quilombola life makes these communities “totally vulnerable” to the coronavirus.

In the cities of Porto de Moz and Gurupá, part of the Diocese of Xingu-Altamira in the Amazonian State of Pará, several quilombola communities have completely cut themselves off from contact with the outside world. “I haven’t been able to talk to some of them since the pandemic started. We were informed that they retreated and are waiting for all this to go away,” Franciscan Sister Telma Barbosa said.

Sister Barbosa, whose father is a quilombola, has worked with quilombola communities for 15 years. She worries that the precariousness of quilombola life makes these communities “totally vulnerable” to the coronavirus. “Several settlements don’t have a toilet, so sanitary conditions can be a problem. It’s also common that many people share small houses,” she said.

In recent weeks, Sister Barbosa has been monitoring conditions of several quilombola groups, trying to coordinate food donations to the ones she is able to reach. “That’s the first thing to do. We can’t let them starve to death,” she said.

She is concerned by the practical impossibility of extracting a patient because of a medical emergency from the region. “The only way to the cities is the river,” she said. “A boat journey can take many hours. There isn’t enough time if a person can’t breathe.”

The Most Rev. João Muniz, the bishop of the Diocese of Xingu-Altamira, said that the quilombolas used to be visited by Cuban doctors who worked in the region thanks to an agreement established with Cuba by former presidents Lula da Silva and Dilma Rousseff, members of the Workers’ Party of Brazil.

Those arrangements were quickly terminated when Mr. Bolsonaro came to power, and the quilombola communities were left bereft of medical support. “The current political situation has been very negative for them,” Bishop Muniz said.

Land conflicts have also escalated in recent months, he said. Mr. Bolsonaro supporters include big landowners, who have been expanding their holdings by invading indigenous, quilombola and forest reservations in the Amazon. Since Mr. Bolsonaro took office, the number of land invasions in Brazil grew exponentially.

“In the region of the city of Senador Porfírio, the deforestation rate in March was gigantic. Invaders usually menace the traditional peoples who live in such lands, like the quilombolas,” Bishop Muniz said.

Quilombolas face other challenges. Many are worried about the economic impact of the pandemic. In Pedras Negras, most residents depend on tourism. “The next tourism season should begin in August, but now we don’t know how things will be,” Mr. Santiago said.

The Diocese of Xingu-Altamira has been raising funds for members of quilombola communities and is coordinating food and other assistance for its registered families. In the State of Pará, parishes are often the only civic institutions that have detailed information on the economic status of local families. The diocese has records of the neediest ones and knows who has to be helped.

The church in the Vale do Ribeira region is also concerned about the food security of the quilombola population, said Sister Biagioni. “The communities usually sell the surplus of their agricultural production, but now they can’t do it. The church and nongovernmental organizations are distributing food to many families,” she said.

Her congregation is also helping quilombolas register in Brazil’s social service system, so they can receive the small emergency aid. “Not everybody can access the internet. We’ve been doing dozens of registrations and many people are already getting their money,” she said.