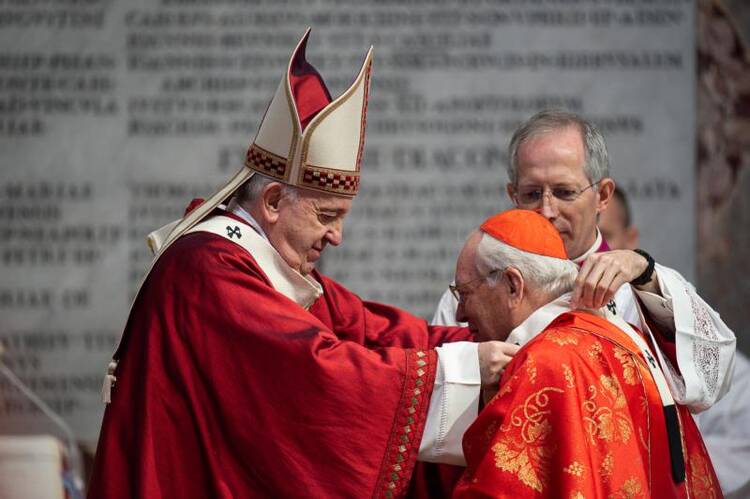 Pope Francis places a pallium on Cardinal Giovanni Battista Re, dean of the College of Cardinals, as he celebrates Mass marking the feast of Sts. Peter and Paul in St. Peter's Basilica at the Vatican on June 29, 2020. (CNS photo/Vatican Media).

Pope Francis delivered a stirring homily on the need for unity and prophecy in the church today as he celebrated Mass in St. Peter’s Basilica for the feast of Saints Peter and Paul, the patrons of the church of Rome.

He recalled how Peter and Paul, despite their human limitations, gave their lives and died as martyrs for Jesus. He told the virtual congregation (following the live stream broadcast) that “there are always those who destroy unity and stifle prophecy.” However, “the Lord believes in us and he asks you: ‘Do you want to be a builder of unity? Do you want to be a prophet of my heaven on earth?’ Let us be challenged by Jesus and find the courage to say to him: ‘Yes, I do!’”

He began the celebration by venerating the 14th-century statue of St. Peter in the basilica and then praying at the tomb of Peter under the main altar. As he prayed, ten members of the Sistine Choir sang “Tu es Petrus” (“You are Peter”).

Pope Francis: “Peter spoke to Jews, and Paul to pagans. And when their paths crossed, they could argue heatedly.”

After praying, Francis went in procession to the altar of the Chair of St. Peter, behind the main altar, at which he has celebrated all the major liturgies since the pandemic forced a lockdown in Italy and the Vatican in early March. There he concelebrated Mass with the 10 cardinals who constitute the order of cardinal-bishops. The Mass was also attended by a small congregation of 90 people with masks, respecting the social distance norms required during the pandemic.

At the start of the celebration, Cardinal Giovanni Battista Re thanked Francis for “the strength and support” he has given to so many people during the Covid-19 pandemic. He said the pope’s words, actions and liturgies “have been a beacon of light and a source of relief to others,” and that under Francis’ leadership “the church has again become a friend of the poor.”

Francis then blessed the pallia, white wool strips of cloth with black crosses worn over the shoulders, that the nuncios—the pope’s representatives in individual countries around the world—will bestow on the 54 metropolitan archbishops whom Francis has named over the last year, including Archbishop Wilton Gregory of Washington, D.C., as a sign of their communion with the successor of Peter. He placed the pallium on Cardinal Re, the new dean of the college of cardinals.

"It is pointless, even tedious, for Christians to waste their time complaining about the world, about society, about everything that is not right. Complaints change nothing.”

In his homily, Francis first spoke about the need for unity in today’s church. He noted that Peter and Paul were “two very different individuals: Peter, a fisherman who spent his days amid boats and nets, and Paul, a learned Pharisee who taught in synagogues.” When they went forth on mission, “Peter spoke to Jews, and Paul to pagans. And when their paths crossed, they could argue heatedly,” which can happen in close-knit families “where there may be frequent arguments but unfailing love.” Francis noted that “the closeness that joined Peter and Paul did not come from natural inclinations, but from the Lord” who “did not command us to like one another, but to love one another. He is the one who unites us, without making us all alike.”

Further, he said, today’s reading from the Acts of the Apostles tells us that the newly born church was experiencing a moment of crisis, but “at that tragic moment no one ran away, no one thought about saving his own skin, no one abandoned the others, but all joined in prayer. From prayer, they drew strength, from prayer came a unity more powerful than any threat.” Francis emphasized that “unity is the fruit of prayer, for prayer allows the Holy Spirit to intervene, opening our hearts to hope, shortening distances and holding us together at times of difficulty.”

Francis noted that “at that dramatic moment, no one complained about Herod’s evil and his persecution. No one insulted Herod—but we are accustomed to insult those who are responsible.” But, he said, “it is pointless, even tedious, for Christians to waste their time complaining about the world, about society, about everything that is not right. Complaints change nothing.”

Departing from his prepared text, Francis said, “complaints are the second door closed to the Holy Spirit: the first is narcissism, the second is discouragement, the third is pessimism. Narcissism leads one to continually look at oneself in the mirror, discouragement leads to complaints, pessimism [leads] to darkness, obscurity. These three attitudes close the door to the Spirit.”

"The Lord did not command us to like one another, but to love one another. He is the one who unites us, without making us all alike.”

Then in words that appeared directed to his critics in the church, Francis recalled that “those (first) Christians did not cast blame; they prayed. In that community, no one said: ‘If Peter had been more careful, we would not be in this situation’. No one!” He added, “Peter, humanly speaking, had reasons to be criticized, but no one criticized him. They did not complain about Peter; they prayed for him. They did not talk about Peter behind his back; they talked to God.”

“We today can ask ourselves: “Are we protecting our unity with prayer, our unity of the church? Are we praying for one another?” What would happen if we prayed more and complained less? The same thing that happened to Peter in prison,” Francis continued. “Now as then, so many closed doors would be opened, so many chains that bind would be broken. And we would be amazed.”

Francis recalled that according to tradition, “we are united in a particular way with the Ecumenical Patriarchate of Constantinople” because “Peter and Andrew were brothers,” and “whenever possible, we exchange fraternal visits on our respective feast days… as a means of journeying together towards the goal that the Lord points out to us: full unity.” The pandemic has made this impossible this year, but Francis said he felt close to the Patriarch as he prayed at the tomb of Peter.

A Complicated Apostle: Who was St. Paul?
John J. Kilgallen

Pope Francis went on to speak about the need for prophecy in the church today, saying “prophecy is born whenever we allow ourselves to be challenged by God, not when we are concerned to keep everything quiet and under control. When the Gospel overturns certainties, prophecy arises. Only someone who is open to God’s surprises can become a prophet.”

Francis added that “we need lives that manifest the miracle of the love of God. Not forcefulness, but forthrightness. Not palaver, but prayer. Not speeches, but service. You want a prophetic church? Then begin to serve and stop talking. Not theory, but testimony.”

Moreover, he said, “We do not need to become rich, but rather to love the poor. We are not to save up for ourselves, but to spend ourselves for others, not to seek the approval of the world...We need pastors who offer their lives” like Peter and Paul. What they did “was prophecy. And it changed history.”