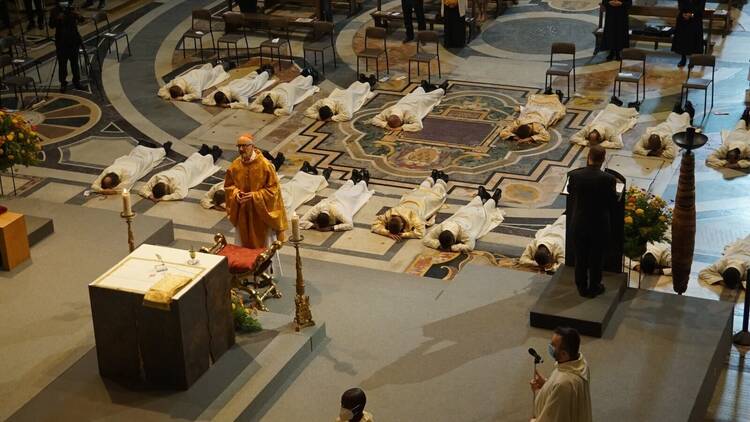 Cardinal Michael Czerny, S.J., presides over the ordination of 18 Jesuit deacons and two Jesuit priests at the Church of the Gesú in Rome on Saturday, June 27, 2020 (Photo by Pierre Bélanger, S.J., and James Kulvi, S.J.)

Cardinal Michael Czerny, S.J. ordained 20 Jesuits—two as priests and 18 as deacons—from 15 countries at the Church of the Gesú in Rome this afternoon, June 27. The ordinations took place as Italy came out of lockdown after being one of the worst-hit countries in Europe by the Covid-19 pandemic, with almost 35,000 deaths over the past five months.

It was the Jesuit cardinal’s first ordination since Pope Francis ordained him bishop in St. Peter’s Basilica on Oct. 4, 2019, prior to giving him the red hat the following day. Cardinal Czerny carried a wooden crozier and wore a simple pectoral cross made from the wood of a shipwrecked migrant boat as he presided at the ceremony.

Vatican II taught that all the baptized are called “to share in the mission and ministry of the church,” said Cardinal Czerny, adding that “ordained ministry does not exhaust or monopolize this ministry,"

Around 150 people attended, mostly Jesuits but also some religious women, in addition to Arturo Sosa, S.J., the superior general of the Society of Jesus. Everyone wore masks except for the cardinal, the choir and the lectors when they were reading, in accordance with the norms laid down by the Italian Bishops’ Conference. No relatives of the ordained were present at the ceremony because of travel restrictions linked to the coronavirus pandemic that has hit 188 countries, infected almost ten million people worldwide and caused the deaths of another half million, but family and friends were able to follow on a video live stream.

Cardinal Czerny began his homily by extending a warm welcome to “the family, friends and relations who are participating by television or tablet or smartphone.” Referring to the day’s Gospel, which told how on the first Easter evening “the apostles had locked themselves into the upper room,” he said, “we too now know what lockdown means,” and remarked that “even nowadays, our church sometimes feels fearful and closed in on itself.”

He added that like the apostles, those being ordained will receive the Spirit “to heal and to comfort, to liberate and to reconcile, to raise up and make glad,” and “to be a herald of the Gospel, a minister of reconciliation and of liberation, in the world of today and tomorrow, where everything seems to be constantly and rapidly new.”

Addressing the 20 being ordained, he reminded them that throughout its long history, the church has had to cope “with new conditions and new challenges.” He added that while “discernment is part of the Jesuit style and training instituted by Saint Ignatius of Loyola,” those being ordained “can help others in the church to practice discernment, for it is not exclusively Jesuit property, nor is it a prerogative of the ordained.”

“There is no map,” Cardinal Czerny said, but “as ministers of the church it is necessary to have the courage of witness, to choose the uphill path of the ‘new’ and not to take the downhill path of the ‘safe’.”

He reminded them too that Vatican II taught that all the baptized are called “to share in the mission and ministry of the church,” adding that “ordained ministry does not exhaust or monopolize this ministry, for it is the church as a whole that is ‘ministerial’ and all its members share in that responsibility.” He told them “today’s ministers are ordained to foster the active insertion of God’s people in the life and responsibilities of the church.”

The Jesuit cardinal recalled that the Second Vatican Council “embraces the world as the privileged place of announcing the Good News” and called on the new deacons and priests “to leave the comfort zones called ‘sacristies’ where, like the disciples in today’s Gospel, they had been shut in for fear of what was happening ‘outside’.” He said those to be ordained are called to embrace “the world, with its problems and struggles, with its contradictions and its values, with its opportunities and obstacles.”

He reminded them that in their ministry they “will be participating in the synodal practice that is gradually growing in the church. He encouraged them to “try to walk together with ever greater enthusiasm” and “without thinking that you already have the best answer or all the answers, try to draw on many people and listen to many voices.” He told them, “you will find that it requires both humility and courage, to recognize that one cannot do everything on one's own.”

“There is no map,” Cardinal Czerny said, but “as ministers of the church it is necessary to have the courage of witness, to choose the uphill path of the ‘new’ and not to take the downhill path of the ‘safe’.”

Inside ‘Querida Amazonia:’ A Conversation with Cardinal Michael Czerny, S.J. | Behind the Story
America Video

The 20 new deacons and priests reflect the universal nature of the church and of the Society of Jesus: They come from 15 countries and are all studying in Rome. The two newly ordained priests, Eric Kambale, S.J., and Vyacheslave Okun, S.J., come from the provinces of Central Africa and Poland respectively.

Cardinal Czerny presided at the ceremony in Italian but delivered his homily in English. He alone laid hands on the 18 deacons, but the other concelebrants, including Father Sosa, followed him in the traditional practice of laying hands on the two new priests, while the choir sang a hymn to the Holy Spirit in Italian.