What are dioceses doing about priestly ordinations amid coronavirus crisis?

What are dioceses doing about priestly ordinations amid coronavirus crisis? 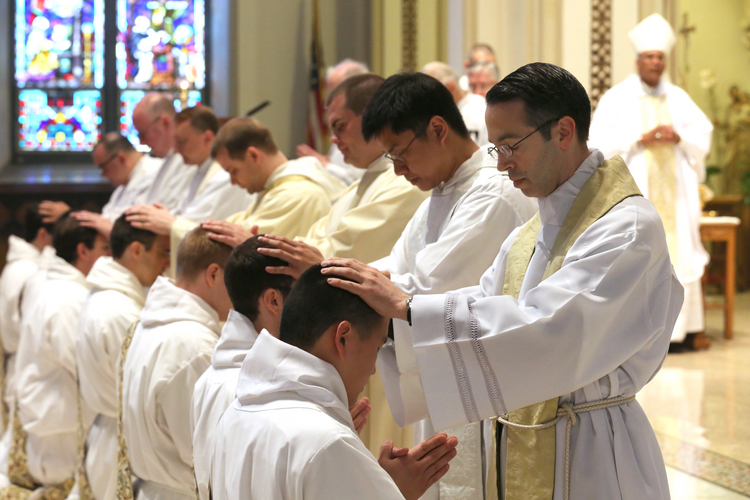 Father Joseph Cazenavette, right, and other clergymen lay their hands on men during their ordination Mass at St. Dominic's Church in Washington May 23, 2014. Some dioceses are postponing priestly ordinations this year because of the coronavirus pandemic. (CNS photo/Bob Roller)

WEST PALM BEACH, Fla. (CNS) -- With spring priestly ordinations just around the corner, many dioceses around the U.S. anticipate that state pandemic-related lockdown measures will extend into May and are pushing back their plans, while others are still weighing their options.

In the heart of the nation's COVID-19 pandemic, Father Christopher Argano, vocations director for the Archdiocese of New York, told Catholic News Service that New York Cardinal Timothy M. Dolan was in a wait-and-see mode and hoping that plans could remain in place for a May 25 ordination ceremony at New York's St. Patrick's Cathedral.

Cardinal Dolan is hoping to ordain one seminarian for the archdiocese and possibly one or two local Franciscan seminarians for their religious order, followed by a June 13 ordination of permanent diaconate that the archdiocese has scheduled.

"That is a question that is still being looked at, these are questions we don't have answers to yet," Father Argano said of whether the archdiocese will ultimately be able to proceed with ordinations as scheduled.

"The cardinal is hoping against hope that at that time, there would be a loosening of restrictions and that we could have a small group of immediate family and guests there, but we just don't know."

In March, New York Gov. Andrew Cuomo ordered the Empire State to shut down and asked local businesses to step up as officials mounted a desperate struggle to slow the corona¬virus pandemic in what has become the nation's deadliest hot spot for COVID-19.

On April 6, the governor directed schools and nonessential businesses to stay closed for an additional two weeks through April 29 and it remains unknown if that lockdown order will be again extended.

"If we can't have a full church, maybe they will postpone it or maybe we will just have a few family people (on hand)," Father Argano said.

Vocations directors in New York state met recently to discuss the situation, according to the priest, noting that at least one diocese, Albany, has already decided to postpone its ordinations until fall when it is hoped the nation may be functioning more normally again.

"As a personal preference, I would (prefer) postponement to the fall," he said, "so you can have other concelebrating priests and a full church with family and friends, though I am sure the person being ordained might like to go forward right now with just family members -- but it is a great blessing to having concelebrating priests and family and friends that may be impossible to have right now."

In Massachusetts, the Archdiocese of Boston announced that Cardinal Sean P. O'Malley has decided to postpone priestly ordinations until Aug. 1 as a result of the uncertainties surrounding social-distancing restrictions as far as when they can be safely lifted.

The cardinal's decision was communicated in an emailed letter to priests of the archdiocese, sent March 31 by Father Robert M. Blaney, secretary for ministerial personnel.

"This difficult decision was made out of the real possibility that we may very likely still be in a state of emergency by the middle of May," Father Blaney said in his letter, which was posted on the archdiocesan website.

In addition to delaying the ordination, Cardinal O'Malley also has reportedly decided to push back the date of new archdiocesan assignments and transfers for most priests "given the logistical challenges of social distancing as well as the great need to provide as much stability in our parishes as possible," Father Blaney said in his statement.

In his letter, Father Blaney also informed priests the annual spring presbyteral convocation originally scheduled for May 18 will no longer be held as an in-person event, but that Cardinal O'Malley is considering holding a "virtual convocation" on that day.

The Diocese of Arlington, Virginia, which reports having 49 seminarians, with five set to be ordained priests this year and five more as transitional deacons, is waiting to see what happens in the coming weeks.

In Virginia, like most other states, public celebration of Masses been suspended with social-distancing guidelines from federal and state authorities and a stay-at-home order in place until June 10.

"In this very unusual time, with the health and safety of seminarians and their families at the forefront of our planning efforts, Bishop (Michael F.) Burbidge will celebrate the priesthood and diaconate ordinations when we can all celebrate them together," Amber Roseboom, director of media relations, told CNS.

In Illinois, which has been experiencing a mounting outbreak of positive COVID-19 cases, the Archdiocese of Chicago has announced postponement of its May ordinations for priesthood and diaconate candidates.

Archbishop Pérez of Philadelphia: We are still a people of hope!
Nelson J. Pérez

A statement posted on the website of the University of St. Mary of the Lake Seminary in Mundelein, Illinois, said that given the current restrictions on large public gatherings in the city of Chicago and the state of Illinois, the ordinations will be indefinitely postponed until public ceremonies can once again be scheduled.

Father John Kartje, rector-president at Mundelein, said he and Chicago Cardinal Blase J. Cupich "are deeply saddened that these liturgical celebrations have to be postponed. They represent the culmination of years of spiritual, academic, and pastoral formation."

"However, it is important that we abide by the current directives for large gatherings. We want these liturgies to be accessible to all, and they will serve as a joyful beginning for the entire Archdiocese to celebrate when we come out of this situation," Father Kartje wrote.

Father Samuel W. Ward, director of vocations for the Archdiocese of Los Angeles, told CNS April 14 that the archdiocese's ordinations are still scheduled, but no definitive decision had been made yet as to whether this will change.

"We have a weekly Zoom call on Wednesdays with the National Conference of Diocesan Vocation Directors' executive board and regional coordinators and last week we discussed the issue of ordination Masses in light of the pandemic," said Father Ward, who is the group's regional coordinator for Region XI.

"Some dioceses have postponed the ordinations until the fall. I know of two dioceses that have set tentative dates of Aug. 15 and Sept. 5 and I understand that the Diocese of Dallas is going forward with their ordinations in late May at this point," he said, noting that other bishops have indicated to their staff they are taking a wait-and-see approach.

Provide feedback on this article
Join the conversation: Login or create an account
Before you can comment, you need to update your profile to include your first and last name, as required in our comments policy. Then reload this page and you'll be set up for commenting. Update your profile
More: Sacraments