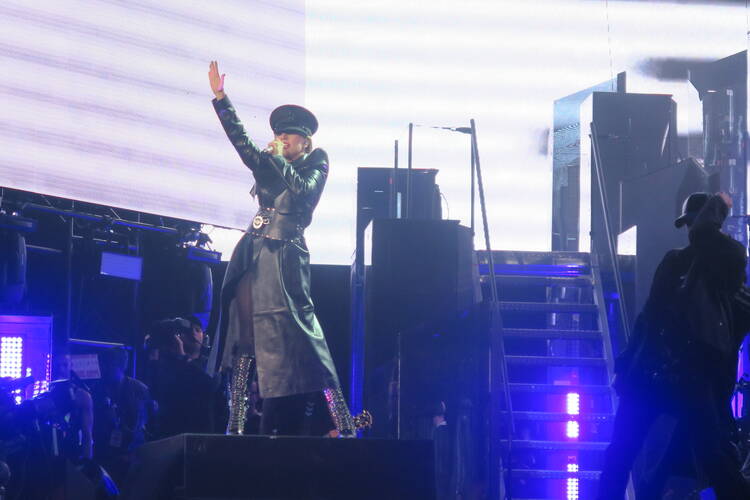 Lady Gaga’s “Chromatica” opens with a sweeping, sci-fi-like orchestral arrangement, flying the listener to another world. In this case, that world is Chromatica, the glittering planet portrayed in the “Stupid Love” music video, where campy, neon-clad tribes (including Gaga’s own “Kindness Punks”) battle for dominance to an electronic pop soundtrack.

While the album lends itself well to escapism—quarantine dance party, anyone?—listeners would be remiss to use this voyage to Chromatica solely as a journey beyond our own pandemic- and injustice-ravaged world. “Chromatica” transports us light years away, ultimately, to return us to ourselves: here, on this planet, in our bodies.

The album represents a homecoming of sorts for Lady Gaga, whose last two albums veered away from the bubblegum and then avant-garde pop that catapulted her to fame in the late aughts.

The album represents a homecoming of sorts for Lady Gaga, whose last two albums veered away from the bubblegum and then avant-garde pop that catapulted her to fame in the late aughts. On 2014’s “Cheek to Cheek,” a collection of jazz duets with Tony Bennett, and 2016’s country-rock “Joanne,” Gaga opted for the type of stripped-down sound that critics like to call “honest.” “Joanne,” however, did not deliver the kind of unguarded wrestling with pain that Gaga had hoped for when she began work on it. In a recent interview, she described realizing that the album had been an unsuccessful effort to heal her father from his trauma of losing his sister, Joanne, at a young age; for Gaga herself, such healing was yet to come.

After struggling with themes of addiction, mental illness and suicide in 2018’s “A Star is Born,” and picking up an Oscar nomination for Best Actress along the way, Gaga began speaking more openly about her own history with mental illness and, in particular, her use of antipsychotic medication. (Those medications make an appearance on “Chromatica”in the song “911.”) The pop star has suffered from fibromyalgia, self-harm, panic attacks and post-traumatic stress that, she said, resulted from being sexually assaulted as a teenager.

It is this mental and physical pain that Gaga wrestles with in a newly personal way amid the heavy club beats of “Chromatica,” returning not only to her earlier pop sound but also to the themes of fame and liberation in dance that dominated her previous music, this time with a new vulnerability.

Gaga has written songs about fame since before her first album, 2008’s “The Fame,” which she followed up quickly with 2009’s “The Fame Monster” EP. Fame, in Gaga’s oeuvre, goes hand in hand with the destruction of the self: Becoming a star necessitates an overinflated level of self-commodification that ultimately leaves one feeling that he or she no longer belongs to one’s own self but rather, to the public. In “Fun Tonight,” Gaga describes the way that her experience of celebrity conflicts with someone else’s attraction to it, singing, “You love the paparazzi, love the fame/ Even though you know it causes me pain/ I feel like I’m in a prison hell/ Stick my hands through the steel bars and yell.”

Mental illness, likewise, creates a sense of imprisonment for Gaga, which she captures in the album’s dark lyrics: On “Replay,” she sings, “Every single day, yeah I dig a grave/ Then I sit inside it, wondering if I'll behave.... The scars on my mind are on replay.” The album opener (following the instrumental prelude track), “Alice,” lays bare the physical-mental dichotomy at the heart of Gaga’s struggle: “Could you pull me out of this alive?/ Where’s my body? I’m stuck in my mind.”

Sexual assault, chronic pain, mental illness, self-harm and fame each make the person who suffers from them feel as if he or she does not belong in or have ownership of his or her own body.

Sexual assault, chronic pain, mental illness, self-harm and fame each make the person who suffers from them feel as if he or she does not belong in or have ownership of his or her own body. Catholics, of course, believe the body and mind are not so easily separable: From beliefs in the Incarnation to transubstantiation to bodily resurrection, our bodies are us; they are the medium through which we experience both suffering and the sacred, and it is our destiny not to escape them but to be returned to them.

Growing up in an Italian-American Catholic family, Gaga was formed with these ideas, and they continue to appear in her art and her public persona in ways both reverent and provocative. In a 2016 Instagram post, she thanked a New York priest for his homily, from which she quoted him saying the Eucharist is “not a prize for the perfect but the food that God gives us.” While it would be presumptuous to say Gaga consciously incorporated such themes into “Chromatica,” an incarnational imagination is evident in much of her healing from mental and physical trauma: A healing that, her lyrics and interviews show, is accomplished through a “radical acceptance” of the realities of her body and her humanity.

In “Chromatica,” that vital and healing restoration of the self to the body is accomplished through dance: a physical manifestation of one’s emotions, driven by the transcendent power of music described in her duet with Elton John, “Sine from Above.”

“This is my dance floor I fought for,” Gaga sings on “Free Woman,” early in an album that carries the listener through a Passion-like narrative of immense mental and physical suffering, a journey to another world where mysterious forces battle, and finally, a restoration of the body, fully alive, still bearing scars, and “flying like a thousand doves” (“1,000 Doves,” the penultimate track). It is only fitting that, when the dance floor has been reclaimed, the album ends with the Madonna-esque “Babylon.” After all, what is a hard-won dance floor for if not to dance?