Podcast: Why is the Vatican silent on Archbishop Viganò?

Podcast: Why is the Vatican silent on Archbishop Viganò? 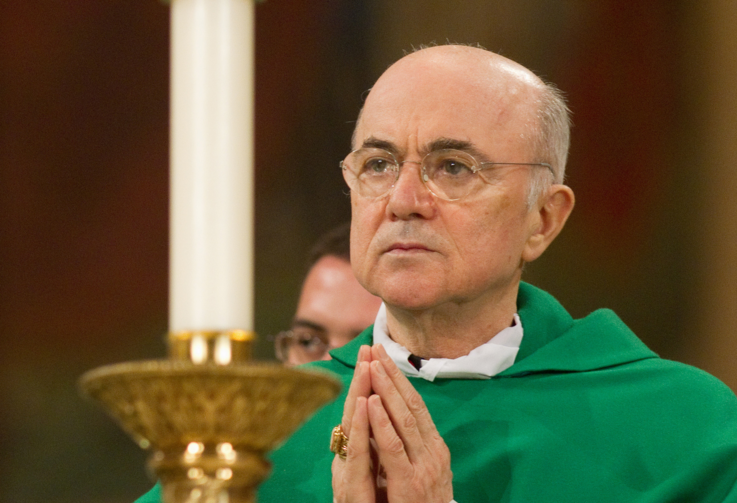 Archbishop Carlo Maria Vigano, apostolic nuncio to the United States, attends the opening Mass of the National Prayer Vigil for Life at the Basilica of the National Shrine of the Immaculate Conception in Washington in this Jan. 22, 2011, file photo. (CNS photo/Nancy Phelan Wiechec)

Last week, Archbishop Carlo Maria Viganò was back in the spotlight after President Donald Trump tweeted promoting an open letter that Viganò had written to him. The letter praised Mr. Trump for “defending the right to life” and expressed Archbishop Viganò’s belief in a number of conspiracy theories, including the idea of a “deep state” group undermining the American government and a parallel group within the Catholic church.

Archbishop Viganò has published many such letters since his original 11-page “testimony,” published in 2018, accusing a number of top church officials of knowing about abuse by former Cardinal Theodore McCarrick, blaming a “homosexual network” in the Vatican for the abuse crisis, and calling on Pope Francis to resign.

President Trump tweeted about Archbishop Viganò. So, who is he?
Michael J. O’Loughlin

The Vatican has been relatively tight-lipped in response to the archbishop: When journalists asked Pope Francis about the “testimony,” the pope refused to comment beyond saying, “Read that statement attentively and make your own judgment,” adding, “I think the statement speaks for itself, and you have a sufficient journalistic ability to make a conclusion.” Many of the archbishop’s claims have since been called into question, and the Vatican is conducting its own investigation into Mr. McCarrick.

On this episode of “Inside the Vatican,” veteran Vatican reporter Gerard O’Connell and I discuss why the Vatican has remained quiet in response to Archbishop Viganò and whether that is likely to change following President Trump’s endorsement.

We also discuss Pope Francis’ message for the World Day of the Poor, along with the new fund he established with the mayor of Rome and the governor of Lazio to aid workers who had not previously been eligible for government assistance.