Pope Francis’ message for the World Day of the Poor amid pandemic: We are all responsible 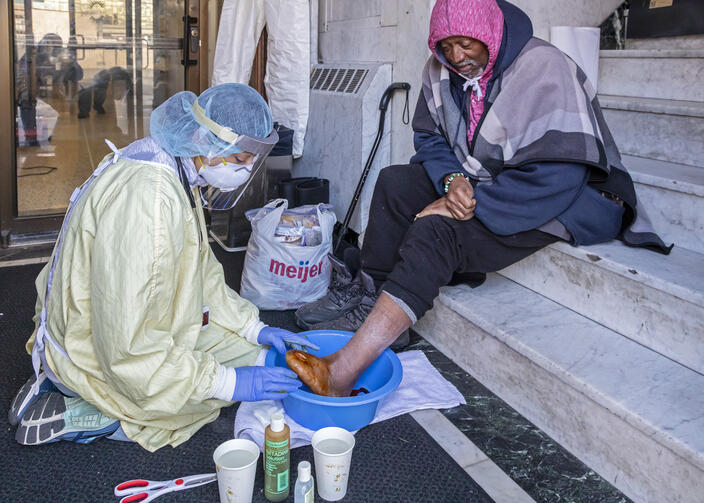 A health care worker in Detroit cares for a homeless man in early May at the Pope Francis Center during the COVID-19 pandemic. The Catholic Church will mark the World Day of the Poor Nov. 15. (CNS photo/Jim West)

As the coronavirus pandemic continues to spread across the world, Pope Francis told Christians and people of goodwill that “until we revive our sense of responsibility for our neighbor and every person, grave economic, financial and political crises will continue.”

“We cannot feel alright when any member of the human family is left behind and in the shadows,” Pope Francis said in his message for the World Day of the Poor, which was presented at a virtual Vatican press conference this morning, June 13, by Archbishop Rino Fisichella, the president of the Pontifical Council for the Promotion of the New Evangelization.

He reminded believers worldwide that the Bible teaches us that “prayer to God and solidarity with the poor and suffering are inseparable.”

“We cannot feel alright when any member of the human family is left behind and in the shadows,” Pope Francis said in his message for the World Day of the Poor.

Francis has sought to underline this teaching throughout his pontificate by giving special attention to the poor. At the end of the Jubilee of Mercy, on Nov. 20, 2016, he decreed in his apostolic letter “Misericordia et Misera” that the World Day of the Poor be celebrated throughout the Catholic Church on the 33rd Sunday of the ordinary time of the liturgical year, which this year falls on Nov 15.

In his message released today, he said, “The silent cry of so many poor men, women and children should find the people of God at the forefront, always and everywhere, in efforts to give them a voice, to protect and support them in the face of hypocrisy and so many unfulfilled promises, and to invite them to share in the life of the community.”

Pope Francis acknowledged that “the church certainly has no comprehensive solutions to propose, but by the grace of Christ she can offer her witness and her gestures of charity,” and “likewise she feels compelled to speak out on behalf of those who lack life’s basic necessities.”

Pope Francis reminded believers worldwide that the Bible teaches us that “prayer to God and solidarity with the poor and suffering are inseparable.”

He said Christians are called “to remind everyone of the great value of the common good,” which is “expressed in the effort to ensure that no one whose human dignity is violated in its basic needs will be forgotten.”

Archbishop Fisichella referred to the importance of “the common good” when asked by a journalist what the Vatican can do to ensure that when a vaccine is discovered for the coronavirus, it will be available for all. He said he hoped the world would not see a repeat of the mistake made with the drug used to combat the H.I.V./AIDS epidemic, which came at a high price and was not available to the poor in Africa.

“We are dealing with a pandemic, not an epidemic, and we must consider the common good, not the good of some people only,” he stated. He said science needs rules, and the church emphasizes the importance of “ethical principles” in this context, so that “the discovery of a vaccine can’t be just for the good of a few, it has to be for the good of all.”

In his message, Pope Francis drew attention to the “many outstretched hands that we see today” amid the pandemic and remarked that it is “only when something happens that upsets the course of our lives do our eyes become capable of seeing the goodness of the saints ‘next door’ who, living in our midst, reflect God’s presence.”

In these months, Francis said, “when the whole world was prey to a virus that brought pain and death, despair and bewilderment, how many outstretched hands have we seen!”

He noted that “bad news fills the pages of newspapers, websites and television screens, to the point that evil seems to reign supreme. But that is not the case. To be sure, malice and violence, abuse and corruption abound, but life is interwoven, too, with acts of respect and generosity that not only compensate for evil but inspire us to take an extra step and fill our hearts with hope.”

In these months, Francis said, “when the whole world was prey to a virus that brought pain and death, despair and bewilderment, how many outstretched hands have we seen!” He pointed to the outstretched hands of physicians “who cared about each patient” and “nurses who worked overtime, for hours on end, to look after the sick.” He also mentioned so many other “outstretched hands”: administrators, pharmacists, priests, volunteers who helped people living on the streets and those with a home yet nothing to eat, and those who worked to provide essential services and security.

“Those hands defied contagion and fear in order to offer support and consolation,” he stated.

“This pandemic arrived suddenly and caught us unprepared, sparking a powerful sense of bewilderment and helplessness,” the pope said. “Yet hands never stopped reaching out to the poor. This has made us all the more aware of the presence of the poor in our midst and their need for help.”

“Now is a good time to recover the conviction that we need one another, that we have a shared responsibility for others and the world.”

Francis emphasized that “structures of charity, works of mercy, cannot be improvised. Constant organization and training is needed, based on the realization of our own need for an outstretched hand.”

In the midst of this pandemic, Francis said, “we came to realize how much we need a new sense of fraternity, for mutual help and esteem.... Now is a good time to recover the conviction that we need one another, that we have a shared responsibility for others and the world.”

He said the biblical call to “Stretch forth your hand to the poor”—the central theme of his message for this year’s world day of the poor—is thus “a summons to responsibility and commitment as men and women, who are part of our one human family.”

Then, like the prophets of the Old Testament, not mincing his words and calling people to conversion, Pope Francis devoted a whole paragraph of his message to those who to date are not responding to the biblical command “Stretch forth your hand to the poor.” He told his global audience, this command “challenges the attitude of those who prefer to keep their hands in their pockets and to remain unmoved by situations of poverty in which they are often complicit. Indifference and cynicism are their daily food.”

He contrasted the attitude of these people with “the generous hands” of the doctors, nurses and others whom he had spoken about earlier. He said, “If they stretch out their hands, it is to touch computer keys to transfer sums of money from one part of the world to another, ensuring the wealth of an elite few and the dire poverty of millions and the ruin of entire nations.”

Likewise, he said, “some hands are outstretched to accumulate money by the sale of weapons that others, including those of children, use to sow death and poverty,” while “other hands are outstretched to deal doses of death in dark alleys in order to grow rich and live in luxury and excess, or to quietly pass a bribe for the sake of quick and corrupt gain.” Furthermore, he said, “others still, parading a sham respectability, lay down laws that they themselves do not observe.”

Amid all these scenarios, Francis said, “the excluded are still waiting.” He underlined the fact that “to sustain a lifestyle that excludes others or to sustain enthusiasm for that selfish ideal, a globalization of indifference has developed. Almost without being aware of it, we end up being incapable of feeling compassion at the outcry of the poor, weeping for other people’s pain and feeling a need to help them, as though all this were someone else’s responsibility and not our own.”

“Our lives will sooner or later come to an end,” he reminded his global audience. “Remembering our common destiny can help lead to a life of concern for those poorer than ourselves or lacking the opportunities that were ours.”

Moreover, he said, “the ‘end’ of all our actions can only be love. This is the ultimate goal of our journey, and nothing should distract us from it. This love is one of sharing, dedication and service, born of the realization that we were first loved and awakened to love.”