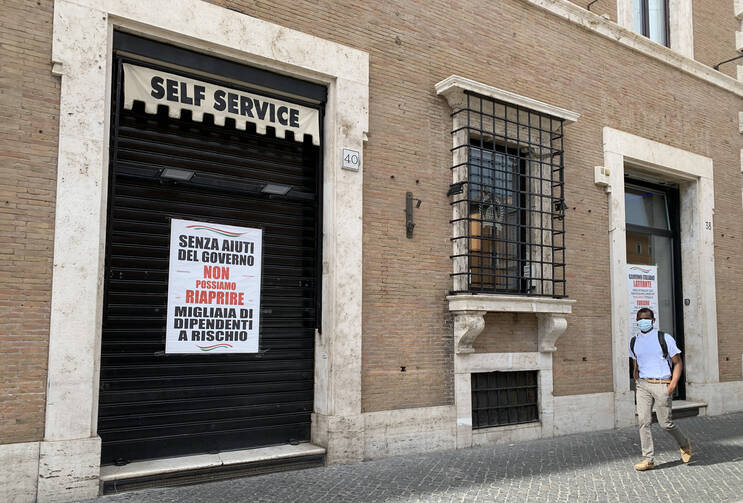 A man walks past a coffee bar and cafeteria on the Via della Conciliazione near the Vatican June 9, 2020. The sign in the window says, "Without government help, we cannot reopen. Thousands of employees at risk." (CNS photo/Cindy Wooden)

Pope Francis has set up the “Jesus the Divine Worker Fund” to help families and individuals in the Rome diocese who have lost their livelihood because of the economic crisis created by the coronavirus pandemic. Many here are struggling to survive, especially workers in the gig economy and the families they support, because they are ineligible for assistance from the state or other institutions.

“As bishop of Rome, I have decided to institute in the diocese the ‘Jesus the Divine Worker Fund’ to affirm the dignity of work,” Pope Francis said in a letter to the cardinal vicar of the Diocese of Rome, Angelo De Donatis. In his letter, the pope expressed his profound concern about the condition of so many people, especially those in the informal sector, as the government lifts the lockdown and the economy enters the pandemic recovery phase.

In his letter, Francis expressed his concern for “the great host of day or occasional workers, those who had temporary contracts but not renewed now” as well as “those who are paid by the hour, seasonal workers, domestic workers, small entrepreneurs, autonomous workers, especially those in the most badly hit sectors.”

“As bishop of Rome, I have decided to institute in the diocese the ‘Jesus the Divine Worker Fund’ to affirm the dignity of work,” Pope Francis said.

He said he was thinking especially of “the many mothers and fathers of families who struggle with difficulty to put food on the table for their children and to guarantee them the minimum necessary.”

The pope opened the fund with an “initial contribution” of one million euros ($1.12 million), which the Caritas organization in the diocese can draw on to help those most in need.

“I would like to think,” he said, “that [the fund] can become an occasion for a true and proper alliance for Rome in which everyone, for their own part, feels a protagonist for the renaissance of our community after the crisis...a sign capable of soliciting all persons of goodwill to offer a concrete gesture of inclusion, especially for those who need comfort, hope and recognition of their rights.”

He invited “all institutions and our fellow citizens to share in a generous way that which they have at this extraordinary time which is so full of needs.” He appealed to Romans to give not just “from the surplus” they may have. He called on the priests to set an example and “be the first to contribute to the fund” and so become “enthusiastic supporters of sharing in their communities.”

Before Easter, Pope Francis asked the papal almoner to request that all prelates (both active and retired) of the Roman Curia contribute a month’s salary to the pope’s fund to help those gravely disadvantaged by the coronavirus pandemic. They responded with generosity, sources said.

This time, he has appealed to the priests of the diocese to give what they can to this new “Jesus the Divine Worker Fund.” At the same time, he praised the many people in the Rome diocese who have already responded to the plight of poor and vulnerable people in the eternal city and also noted “the increase in donations” to help the sick and needy. He rejoiced at seeing these “signs of vitality of the church of Rome.”

“I would like to see flourish in our city the solidarity of ‘the next door [neighbor]’, and actions that reflect the Jubilee year [of the Bible] in which debts are forgiven, contestations are dropped, repayment is asked according to the possibility of the debtor not that of the market.”

Cardinal Peter Turkson, the head of the task force that Pope Francis set up to guide the church’s response to the pandemic and especially the post-pandemic phase, told a press briefing at the dicastery for the service of integral human development that the “Jesus the Divine Worker Fund” was a personal initiative of the pope, “a sign” to the world of what the church can do. The initiative can be seen as setting an example for bishops in dioceses across the world to do something similar.

Cardinal Turkson recalled that Pope Francis told the task force “to prepare for the future” after the pandemic, “starting today, and to create the conditions for a better future.” Cardinal Turkson said the key concepts inspiring the task force’s work are “inclusivity, solidarity, not leaving anyone behind” and the broader one of “fraternity.”

Msgr. Segundo Tejado Muñoz, the undersecretary of the dicastery who is guiding the first of the five initiatives of the task force together with Caritas Internationalis, said, “It’s impossible to help everyone, but we try to help in ways that give signs.”

Aloysius John, the Indian-born general secretary of Caritas Internationalis, explained that through bilateral arrangements between the federation’s member organizations in the local churches, Caritas Internationalis is contributing to 12 million projects in countries across the world at this time of pandemic, including in such badly hit places as Senegal, the Democratic Republic of the Congo, South Africa, South Sudan, India, Peru, Venezuela and Brazil, where it is helping indigenous peoples in particular.

Mr. John emphasized that in this historic moment Caritas Internationalis is focusing on three specific goals: sharing information about the coronavirus with the communities it serves; responding to the food insecurity faced by those who have lost their jobs; and providing basic hygiene and sanitation resources to combat the pandemic. “In these ways we help to give people dignity,” he said.