Archbishop Viganò is aligning with Trump to stay in the spotlight. Pay him no attention. 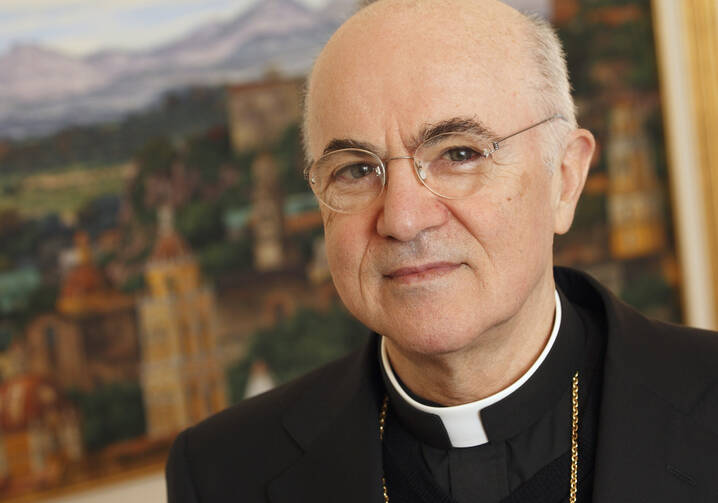 Italian Archbishop Carlo Maria Vigano, former apostolic nuncio to the United States, is pictured at his residence at the Vatican on Oct. 20, 2011 (CNS photo/Paul Haring)

Tweet: “So honored by Archbishop Viganò’s incredible letter to me. I hope everyone, religious or not, reads it!”

A tweet like this from the president of the United States, especially a tweet widely reported on in newspapers and on social media platforms, may lead some readers to think that President Trump’s behavior and policies have been endorsed by the Catholic Church.

In reality, Mr. Trump was responding to yet another public letter from a marginal figure, one who has made a growth industry over the last two years of writing increasingly paranoid and disturbing missives against Pope Francis, the Second Vatican Council and many other enemies real and illusory, including most recently against an imagined “deep church” that he told Mr. Trump parallels the purported “deep state” that the president has blamed for so many of his troubles. Archbishop Viganò's anti-Francis texts are often released in the United States in seeming coordination with a set of sympathetic publications and amplified by media outlets even further out on the political and ecclesial fringe.

But who is Archbishop Carlo Viganò?

President Trump was responding to yet another public letter from a marginal figure, one who has made a growth industry over the last two years of writing increasingly paranoid and disturbing missives.

My colleague at America, Michael O’Loughlin, has written an incisive review of Archbishop Viganò’s career, and that history is worth a quick summary here. Archbishop Viganò was the Vatican’s apostolic nuncio to the United States from 2011 to 2016. That important job entails keeping the Holy Father abreast of what is happening in the nuncio’s assigned territory but also apprising him and his staff of who might be viable candidates for future bishops in the region. Depending on the man, this can be a position of enormous influence. For example, no Catholic pundit will deny that Archbishop Jean Jadot, apostolic delegate to the United States from 1973 to 1980, had an enormous influence on the selections of bishops in the United States during his tenure.

Archbishop Viganò was a quieter figure for most of his own time as nuncio, someone who was little commented upon or even noticed. That changed during the visit of Pope Francis to the United States in 2015. At the end of the visit, Archbishop Viganò arranged for Kim Davis, the civil clerk in Kentucky whose refusal to issue marriage licenses to same-sex couples in accordance with U.S. law had become a flashpoint in a loud and widespread argument, to meet Francis in passing at the nunciature. The meeting and the way it dominated media coverage at the end of the papal visit seemed to have caught Francis and the Vatican by surprise and eventually resulted in a public correction of Archbishop Viganò’s account of events. For a moment, it became clear there was a vast disconnect between the papacy of Pope Francis and the administration of Vatican protocols in the United States.

Archbishop Viganò retreated to being a quiet behind-the-scenes figure until 2018. He offered his resignation on his 75th birthday in 2016 (as is customary), and it was accepted three months later by Pope Francis. In the summer of 2018, he released a blockbuster 7,000-word public letter denouncing Pope Francis while the pope was on his way to Ireland for a historic visit, calling for Francis to resign and accusing him of both covering up sexual abuse charges against prominent clerics, including then-Cardinal Theodore McCarrick, and promoting a “homosexual current” in the Vatican curia.

In the aftermath, few in a position of authority in Rome or in the United States would go on the record for or against Archbishop Viganò. He himself claimed he was in hiding, fearful for his life. The Vatican played the ancient game of romanita, wait and see, waiting for the chips to fall.

Pope Francis took the same tack, though he explained his silence. “I will not say a single word on this,” he said on his plane trip back from Ireland. “I read the statement this morning, and I must tell you sincerely that, I must say this, to you and all those who are interested: Read the statement carefully and make your own judgment.” He has been true to his word since, never once responding to provocations, even as Archbishop Viganò’s accusations have grown more and more absurd and insulting.

They now include suggestions that there is a plot to form a one-world government under the guise of coronavirus protections, that Vatican II was part of a century-long plot to destroy the church and that there are many bishops seeking to destroy the church from within. It all sounds crazy, but it all also sounds not unlike the rhetoric of President Trump—whom he has publicly praised. And he got the expected reciprocal reward.

Archbishop Viganò has been weaponized at this point, with or without his consent, by President Trump.

Public letters released by Archbishop Viganò since 2018 have included these charges:

Pope Francis is overseeing a gay mafia of bishops who are “sabotaging all efforts at reform.”

The imposition of protection measures during the Covid-19 pandemic “is a disturbing prelude to the realization of a world government beyond all control.”

An “an odious technological tyranny” was on its way, “in which nameless and faceless people can decide the fate of the world by confining us to a virtual reality.”

The thousands of Black Lives Matter protests in the United States “were provoked by those who, seeing that the virus is inevitably fading and that the social alarm of the pandemic is waning, necessarily have had to provoke civil disturbances, because they would be followed by repression which, although legitimate, could be condemned as an unjustified aggression against the population.”

Archbishop Gregory and others who have objected to President Trump’s use of Christianity’s most sacred symbols as political props are “subservient to the deep state, to globalism, to aligned thought, to the New World Order which they invoke ever more frequently in the name of a universal brotherhood which has nothing Christian about it, but which evokes the Masonic ideals of those [sic who] want to dominate the world by driving God out of the courts, out of schools, out of families, and perhaps even out of churches.”

Archbishop Viganò has himself been weaponized at this point, with or without his consent, by President Trump. It is surely not going to stop with that one painful tweet or the latest letter from the archbishop. The two men are of a piece. The danger is that one is a fringe figure publishing on fringe platforms, and the other is the president of the most powerful (and most lethal) nation the world has ever known.

Perhaps the tell, if it were not already clear, comes later in Archbishop Viganò’s latest letter:

For the first time, the United States has in you a President who courageously defends the right to life, who is not ashamed to denounce the persecution of Christians throughout the world, who speaks of Jesus Christ and the right of citizens to freedom of worship. Your participation in the March for Life, and more recently your proclamation of the month of April as National Child Abuse Prevention Month, are actions that confirm which side you wish to fight on. And I dare to believe that both of us are on the same side in this battle, albeit with different weapons.

The pandering rhetoric and precise references to Mr. Trump’s political speaking points suggest to us what is really happening here. Archbishop Viganò, marginalized by his own rhetoric, wants to stay in the public spotlight by whatever method possible. In this case, it is by yoking his cause to that of President Trump. But this tells us more about Archbishop Viganò than it does about the Catholic Church or President Trump or anything else, and thus answers only unimportant questions. Our response at this point should be the one that so baffled us when Pope Francis first adopted it in August of 2018: Pay this man no attention.

Editors' note: A previous version of this article incorrectly identified Archbishop Jean Jadot as a Roman Catholic cardinal and as a papal nuncio to the United States. He was the apostolic delegate to the United States, as the office was not elevated to a nunciature until President Ronald Reagan did so in 1984.