What getting married in a pandemic taught these newlyweds 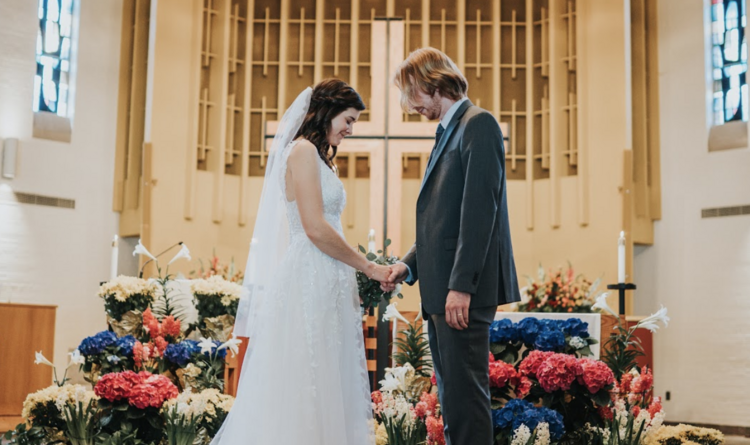 Kelsey and Michael Petrany on their wedding day at Bellarmine Chapel in Cincinnati, Ohio. Photo by Spencer Kolssak Photography

Editor's note: This piece was originally published in The Jesuit Post on May 20, 2020 under the headline “Getting Married in a Pandemic Calls You to ‘See the Unseen.’” America is the publisher of The Jesuit Post.

Michael and Kelsey Petrany can hardly believe that two months ago they were worried about centerpieces. The restrictions of the pandemic made so many of their initial wedding plans impossible, including the presence of their parents, guests, and a reception. The couple decided they wanted to go through with it anyways. And they are glad they did.

“I’m glad we stuck with the original date,” Michael says. “It starts our marriage on this tone that no matter what is going on, literally in the middle of a pandemic, this is our vocation and we’re committed to it.”

“I’m glad we stuck with the original date [for our wedding.] It starts our marriage on this tone that no matter what is going on, literally in the middle of a pandemic, this is our vocation and we’re committed to it.”

Just before the lockdowns began in mid-March, the couple realized their wedding would have to look different. They began adjusting plans, reworking who could come and what was still possible. They began to realize that, for the sake of safety, neither of their parents could come, nor could the older Jesuit priest who was originally set to do the wedding.

“Our worst fear was that our wedding would be a source of contamination and infection,” Michael said.

In the end, aside from a priest and a few members of the parish staff, only Kelsey’s sister and friend and one of Michael’s friends were able to be present. The rest of their family and friends watched through a livestream. Some even sat on picnic blankets on a hill outside the Church.

“Having to drastically change our plans and expectations for what the day would look like really allowed us to focus and prepare for receiving the sacrament,” Kelsey said, noting that the loss of so many of the externals gave them a sense of freedom and intentionality. “If everything had gone as normal, we would have been bogged down or worried about the other details and that can sometimes overpower or take away from the sacrament.”

“To me it’s an example of how when something you expect and are looking forward to is just shoved out the window,” Michael shared, “you don’t get that thing back, but you get something different that is its own thing and completely unique and personal.”

The Petranys are ultimately grateful for how their wedding day turned out and they say it was in some ways the perfect start to a marriage. They’ve drawn a lot of inspiration from other married couples in their own life.

Speaking of a couple from their parish, Bellarmine Chapel on the campus of Xavier University in Cincinnati, who mentored them, Kelsey said they had a sense of “simplicity” in the way they approached their marriage, “They emulated this idea that it’s not about possessions, it’s not even about experiences, but it’s about the love between the two of us and how you choose to show that to the world.”

Approaching the sacrament with this simplicity is something they hope to continue to foster for the rest of their marriage. They are also grateful for how the difficult situation brought home a lesson they knew they would have to reflect on during their marriage.

Michael said there is a common misconception or temptation to believe that “the moment of marriage and falling in love is supposed to be so easy. But no, it’s not always so easy.”

They are also aware that their marriage, even though fewer than 10 people were present at the wedding, is a source of grace for more than just themselves. Kelsey said, “I wanted to get married, but more than anything, I wanted the sacrament because we needed some grace in this time, to be better people and a better couple.” Michael added, “But also to deal with the challenges that this time in the world present us with and hopefully be able to have a united front as a married couple to do what we can to help others moving forward during this time.”

“We’ve been inspired by married couples in our families and friends and thinking about the idea about being called to a sacrificial sort of love” Michael said. “There is no better time to start that than right at the beginning.”

In his Urbi et Orbi message for the Coronavirus, Pope Francis said, “Like the disciples, we will experience that with [Jesus] on board there will be no shipwreck. Because this is God’s strength: turning to the good everything that happens to us, even the bad things. He brings serenity into our storms, because with God life never dies.”

Kelsey and Michael seem to have adopted a similar spirit. Michael said at the beginning there were “All these calculations you do in your head to think, how is this blessed moment not going to be a source of tragedy.” In the end, far from tragedy, the wedding proved to be a source of joy in ways they could not have imagined.

In the end, far from tragedy, the wedding proved to be a source of joy in ways they could not have imagined.

They say they have grown closer together in practical and tangible ways because of the experience, but also in deeper spiritual ways.

“In a strange way, our parents and our families ended up being, in some weird way that we will be unpacking for months and weeks to come, every bit as present,” Michael noted, saying that they’ve experienced a similar phenomenon with live stream Mass during the pandemic.

“It really calls you to see the unseen.”

And it seems this is precisely the meaning of a sacrament: an outward manifestation of an inward grace.

“Was there something missing? Yes. But at the same time, it was very clear that God was there,” The Petranys agreed.