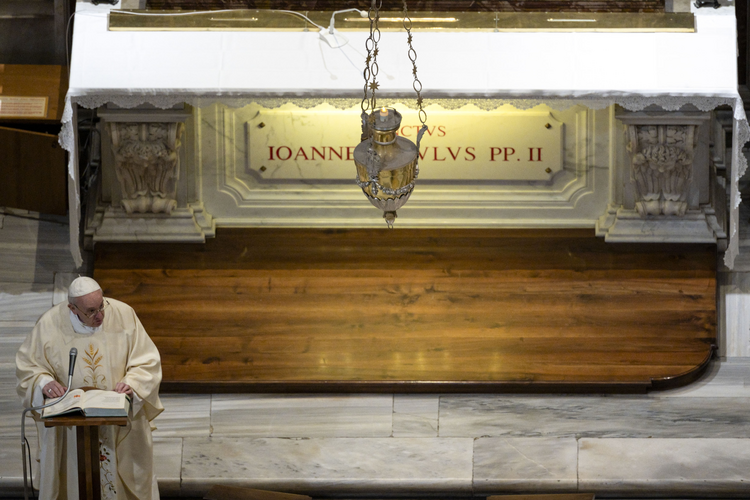 Pope Francis gives the homily at Mass at the tomb of St. John Paul II in St. Peter's Basilica May 18, 2020, the 100th anniversary of the late pope's birth. (CNS photo/Vatican Media)

“God loves his people and he visits them...in difficult times” and “out of love he sends a prophet, a man of God,” just as he did 100 years ago when he sent “a man, whom he prepared to be a bishop and to guide the church,” Pope Francis said in his homily at a Mass celebrating the centenary of the birth of Karol Wojtyla, the first Polish pope.

Francis celebrated the Mass at the altar on the tomb of St. John Paul II in St. Peter’s Basilica on May 18. And for the first time since the national lockdown caused by the coronavirus pandemic, he celebrated in the presence of over 100 people—all respecting the social distance norms. Many of the participants were women religious who also constituted the choir, but there were also lay faithful, including the Polish ambassador to the Holy See, Janusz Kotanski.

All of the Polish bishops had planned to come to Rome for the centenary, together with thousands of Polish pilgrims, for a major celebration with Pope Francis in St. Peter’s Basilica or square, but the pandemic put an end to those plans. Instead, those who had hoped to come to Rome had to follow the Mass online. But they were represented by the Polish cardinal Konrad Krajewski, the papal almoner; and the Polish archbishop Jan Romeo Pawloski, the head of the third section of the Secretariat of State responsible for the Holy See’s Diplomatic Corps.

They concelebrated with the pope in Italian, together with Archbishop Piero Marini, who served as master of ceremonies to John Paul II for 18 years, and the archpriest of St. Peter’s Basilica, the Italian cardinal Angelo Comastri.

Pope Francis celebrated the centenary Mass at the altar on the tomb of St. John Paul II. And for the first time since the national lockdown caused by the coronavirus pandemic, he celebrated in the presence of over 100 people.

In his homily, Pope Francis, whom John Paul II appointed as bishop and later archbishop of Buenos Aires and then in 2001 made cardinal, highlighted three particular traits of the second-longest reigning pope in church history: “prayer, closeness to people and love of justice.”

“St. John Paul II was a man of God because he prayed, and he prayed a lot, in spite of the great amount of work he had to do to guide to church,” Pope Francis said. “He knew that the first task of a bishop is to pray.”

Second, Francis said, the Polish pope was “was not detached from the people; on the contrary, he went out to find people and he went around the whole world, seeking the people, making himself close to them.”

Here, he alluded to the fact that John Paul II spent 800 days on 105 pastoral journeys outside Italy, visiting 129 countries. He also made hundreds of visits to places inside Italy during his almost 27-year pontificate.

A bishop who is not close to his people, Pope Francis said, “is not a pastor; he is a hierarch or an administrator, perhaps a good one, but not a pastor.”

Pope Francis highlighted the third significant trait of the Polish pope as “love for justice.”

He said, John Paul II “was a man who wanted justice, social justice, justice for peoples, justice that casts away wars. Full justice.”

During his pontificate, St. John Paul played a significant role in the fall of communism and took a strong position against the U.S.-led war on Iraq in March 2003.

The pope said St. John Paul was also a man of mercy “because justice and mercy go together. They cannot be distinguished, they are together: Justice is justice, mercy is mercy, but the one is not found without the other. “

Francis recalled how in his efforts for mercy, St. John Paul promoted the devotion to St. Faustina, venerated within the church as the “Apostle of Divine Mercy,” whose liturgical memory is now celebrated throughout the church. He said John Paul II felt “that the justice of God had this face of mercy, this attitude of mercy, and this is the gift he left us.”

Pope Francis concluded his homily by inviting people to pray “that God may give to the pastors of the church and to everyone the grace of prayer, the grace of closeness and the grace of justice-mercy, mercy-justice.”

At the end of Mass, he prayed that God may arouse in us “the flame of charity that incessantly nourished the life of John Paul II” and “moved him to consume himself for the church.”

Among the several hymns sung by the sisters’ choir at Mass, one stood out—“Jesus Christ, You Are My Life!”—remembered as the signature tune of the World Youth Day in Rome in the Jubilee Year 2000 and for the way John Paul II waved his arms high in unison with the young people at the end of a vigil of prayer with them.