Editorial: Discerning when and how a pope emeritus should speak 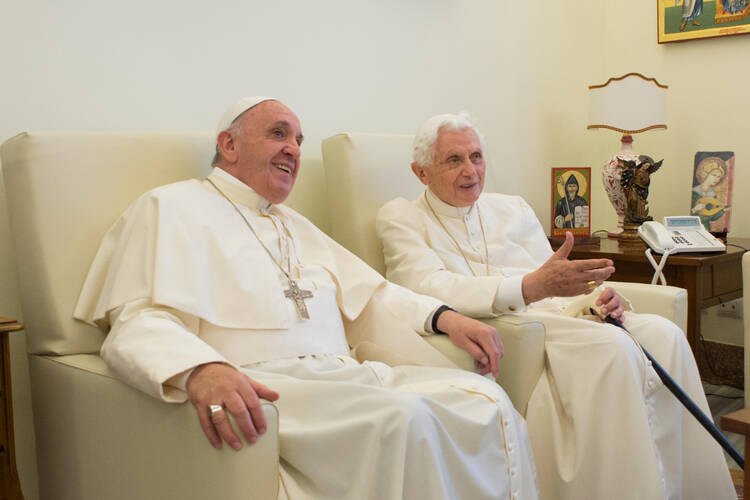 Pope Francis with Pope Emeritus Benedict XVI at the Mater Ecclesiae monastery at the Vatican on June 30, 2015. (CNS photo/L'Osservatore Romano)

Loud headlines in both the religious and secular press earlier this week repeated a trope that has become familiar over the past few years: Pope Emeritus Benedict XVI was speaking out in dramatic ways. Benedict was quoted as saying that the church is threatened by “a worldwide dictatorship of seemingly humanist ideologies,” using same-sex marriage, abortion and in-vitro fertilization as examples and linking them to the “spiritual power of the Antichrist.” His comments were far more extensive and nuanced, of course, but social media and news coverage often make it sound as if he has just held a press conference to denounce something—or someone.

Although upon his resignation from the papacy seven years ago, Benedict said he would remain “hidden from the world,” the latest comments, from a 2018 interview included in a new biography of him, follow a number of similar statements by the former pontiff in the past several years, most of them showing up in books or letters. He also penned an article in April 2019 on sexual abuse that was released shortly after a Vatican summit in February 2019 of the heads of the world’s bishops’ conferences on that subject.

Benedict is a distinguished theologian whose reputation for insightful scholarship and analysis was established long before he became pope. A peritus at Vatican II, a university professor and a bishop before his move to the Congregation for the Doctrine of the Faith under Pope John Paul II, he has always had a formidable grasp of the church’s theological history. It is no surprise that he should have contributions to make to the contemporary ecclesial discourse, or that Catholics around the world should want to hear from him.

It is reasonable to ask whether Benedict’s public commentary is contributing to the life and unity of the church.

At the same time, it is impossible to separate such statements from the fact that he is the former pope and a powerful symbol in the imagination of Catholics worldwide. It is reasonable to ask, then, whether, in this new role as pope emeritus, Benedict’s public commentary is contributing to the life and unity of the church, especially when his comments touch on matters (including sexual abuse and priestly celibacy) that are challenging, hot-button issues for his successor and for Catholics in every parish.

We do not attribute unworthy motives to the pope emeritus. Benedict also may not be aware of the way his comments can be described or misconstrued by individuals whose motives are not so trustworthy as his. (America would normally link to specific third-party examples, but we have no interest in directing our readers to what is essentially misinformation.) Benedict’s words are regularly used as a cudgel by those who make no secret of their desire to hinder the reforms and pastoral emphases of Pope Francis. For example, Pope Francis said in 2013 that an overemphasis on church teachings regarding human sexuality runs the risk of enfeebling the church’s evangelical efforts. In this respect, breathless reporting of Benedict’s comments on social issues like gay marriage, abortion and celibacy depicts him as issuing a correction of his successor and taking sides in favor of a more hardline Catholicism.

Podcast: There is more to Benedict XVI’s new interview than abortion and gay marriage
Inside the Vatican

We are of course in a unique historical situation: Never before has the church had to discern the proper role of a pope emeritus.

In another quotation from this week’s interview excerpts, Benedict said his friendship with Pope Francis had “not only endured but grown” in the seven years since Francis was elected pope, an indication that neither Benedict nor Francis subscribes to the notion that Benedict is trying to undermine Francis. But we respectfully suggest that it would be a powerful outward sign of unity if the pope emeritus and those who advise him sought to avoid situations in which his public comments will be inevitably misused to suggest a division that Benedict has never wanted.