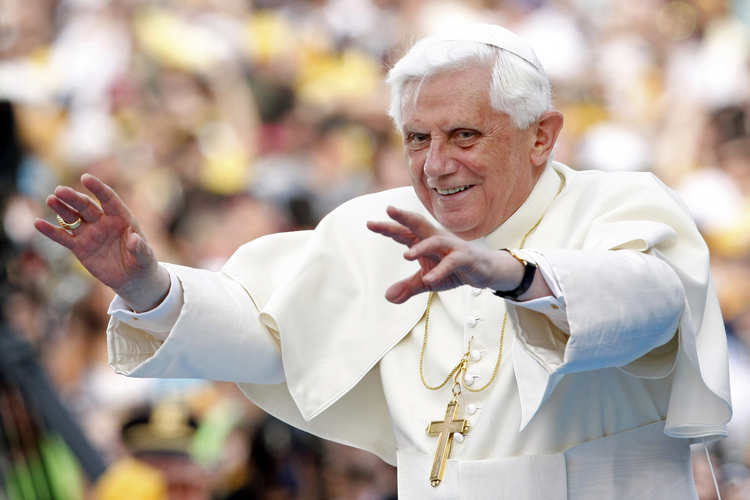 MUNICH (CNS) -- In a newly published biography, Retired Pope Benedict XVI said the Catholic Church is threatened by a "worldwide dictatorship of seemingly humanist ideologies." He cited same-sex marriage, abortion and the "creation of humans in the laboratory" as examples.

The retired pope, 93, said: "Modern society is in the process of formulating an anti-Christian creed, and resisting this creed is punished by social excommunication." Commenting on the state of the church in the 21st century, he said, "Events have shown by now that the crisis of faith has above all led to a crisis of Christian existence."

The German Catholic news agency, KNA, reported the remarks were published in the final chapter of a biography of the retired pope by bestselling author Peter Seewald. The book was published in German May 4; the author said Pope Benedict made the comments in autumn 2018, more than five years after he resigned.

In the interview, which had not been published before, the former pope said he had written a spiritual testament. This will presumably not be revealed until after his death, KNA reported. The pope did not comment on its contents.

He also explained the reasons for his resignation as pope in 2013. He denied that it was because of corruption in the Vatican or the "Vatileaks" scandal. Instead, he said it had become increasingly clear to him that, in addition to possible dementia, "other forms of insufficient ability to hold office properly are also possible."

In this context, Pope Benedict revealed that he, like Sts. Paul VI and John Paul II, had signed a conditional declaration of resignation "in the event of illness that rendered the proper performance of duties impossible." He did this "relatively early" in his pontificate, he told Seewald.

He commented at length on criticism of his resignation. The office of a "pope emeritus" that he had created should be compared to that of a bishop who had retired for age reasons, he said. This legal status could also be applied to the bishop of Rome. It prevented "any notion of a coexistence of two popes: a diocese can have only ONE incumbent. At the same time, it expresses a spiritual bond that can never be taken away."

The former pope also likened his situation to that of an old farmer in Bavaria who has passed his farm to his son, lives in a small house next to it and has ceded his fatherly and commanding rights.

Pope Benedict vehemently rejected accusations that he had interfered in church debates since then. This, he said, was a "malicious distortion of the truth." KNA reported that he hinted there were "reasons why people just want to switch off my voice."

Referring to his relationship with his successor, he said he thanked God that the "warm-hearted devotion of Pope Francis" enabled him to implement the idea of a pope emeritus. Since their meeting in Castel Gandolfo in 2013, he said, there has been a personal friendship that has "not only remained but grown."

Show Comments ()
Join the conversation: Login or create an account
Before you can comment, you need to update your profile to include your first and last name, as required in our comments policy. Then reload this page and you'll be set up for commenting. Update your profile
Advertisement
More: Pope Benedict XVI / Vatican / Europe