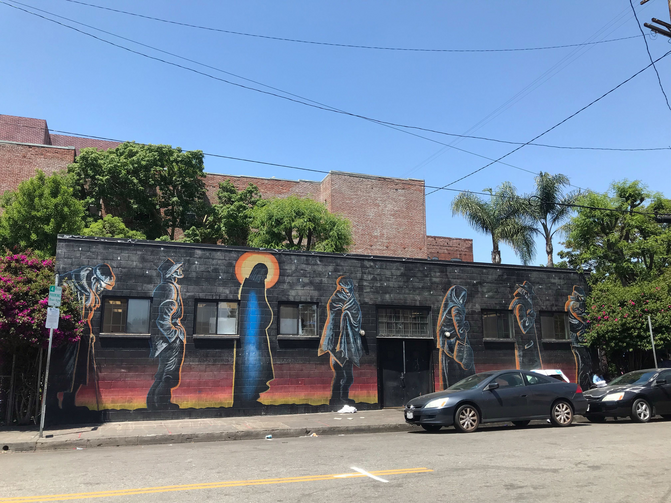 The Los Angeles Catholic Worker soup kitchen, known as the Hippie Kitchen, has adapted to try to prevent the spread of the novel coronavirus while continuing their services for the Skid Row community in Los Angeles. (RNS photo by Alejandra Molina)

LOS ANGELES (RNS) — By the middle of a typical month, the Catholic Worker's soup kitchen on Los Angeles' Skid Row would have served about 80 gallons of beans, to go with the salad and bread it hands out as part of every meal it serves. Since the pandemic struck, said Matt Harper, an organizer with the lay Catholic community, its clientele was going through about double that amount.

Harper, 31, said he's noticed that many of the church groups and community organizations that provide food services to Skid Row — a 54-block area in downtown LA that is often tagged as the nation's largest homeless encampment — have been running out of resources. "Folks were going longer and longer in between meals," Harper said.

For the Catholic Worker's meal center, known as the Hippie Kitchen, meeting the increased need while preventing the spread of coronavirus has meant improvising — both in how it provides its services and how it prevents the spread of the virus.

Meals are now served in to-go containers. The kitchen's adjacent garden, where Harper said clients and others normally gather, is now closed to the public. New volunteers aren't currently being accepted. Instead, a small coterie of longtime staffers and volunteers shows up three mornings a week to prepare meals before the Hippie Kitchen opens at 9:30. On Tuesday (April 28), volunteers in masks and gloves handed out the boxed meals through a side gate to hungry customers.

"If you come to our kitchen, you will get food no matter who you are," said Harper, who has been with the Los Angeles Catholic Worker for a little over three years. That rule of the kitchen's existence means "we've had to prepare more food than I've ever seen us prepare before."

Besides the greater demand for food, COVID-19 has made other needs more pressing, particularly for sanitation. On Tuesday, a Catholic Worker member sat outside the kitchen on a stool with a bottle of hand cleaner.

Harper said that although the city has supplied Skid Row with toilets and wash stations, the facilities are often without water, toilet paper and soap, which have become all the more essential during the pandemic.

Victor Hernandez, who stood outside the kitchen Tuesday eating his meal, said the Los Angeles Catholic Worker staffers and volunteers "have been the ones to sustain us." Another Skid Row resident, who roamed the area on his bicycle and kept the street clean by picking up leftover containers on the sidewalks, said the Hippie Kitchen provides him and other residents "everything you need."

Founded in 1970, Los Angeles Catholic Worker is modeled after the Catholic Worker movement started by Dorothy Day and Peter Maurin in Greenwich Village in New York City in 1933 to relieve poverty. It has always emphasized hospitality for those in need while connecting people to farming.

The Los Angeles outpost also operates a house for the homeless and a bimonthly newspaper called The Catholic Agitator, all funded by individual private donations. It does not accept money from corporations or the institutional church and does not proselytize to its clients.

But volunteers and staff are invited to reflect in their traditional faith traditions, and weekly liturgy is made available. Since the virus struck the nation, however, its religious customs, like many in every community, have been improvised or put on hold.

The Stations of the Cross, normally reenacted with a group of people in Easter season, had to be canceled, though Harper conducted the tradition on his own and livestreamed it on Facebook. Passover Seder was also scrapped this year.

Tending to those needs these days means rethinking some of the Hippie Kitchen's practices, spiritual and practical, and adjusting to a new scale of want. But helping the homeless through the crisis has only thrown into relief needs that, Harper said, "transcend this particular pandemic period."