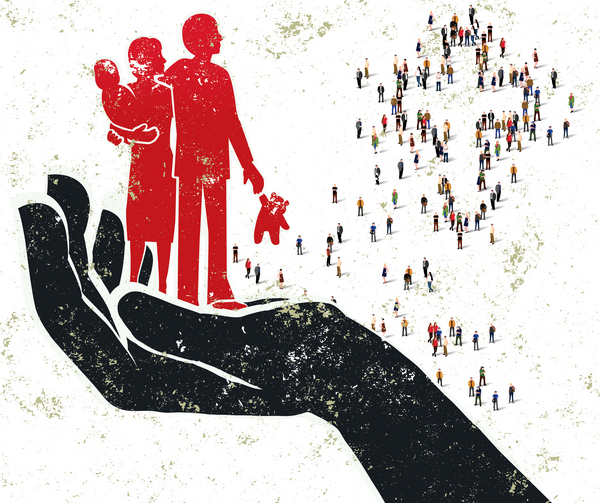 We sat side by side on a hay bale, knees under a makeshift picnic table and bellies full of homemade bread. Samantha lived in a tent by the river. I could sometimes make out the tip of it when I drove by the woods in our SUV on the way home from running errands with my kids. I had heard that she and her boyfriend were troublemakers, a reputation no doubt fueled by their respective addictions, neither of which do any favors for one’s interpersonal skills.

But there at the table, I saw no signs of all that. I saw only a woman who cooed over the baby in my arms. We made small talk, or at least attempted it, until her curiosity could contain itself no longer: “Why are you here?” she asked. She could not keep the skepticism out of her voice, and I did not blame her. I was married and clearly middle class, despite my best attempts to play it down. Why on earth was I hanging out at the Day House, a place frequented mostly by people experiencing homelessness? I chuckled low and got honest: “Because we need friends.”

Three years prior, my husband and I had returned to the United States after two years of serving as Protestant evangelical missionaries in Indonesia. When we came home, it was as first-time parents to a newly adopted son. Between reverse culture shock and the tangled web of adapting to the complications of our son’s early childhood trauma, our lifelong faith suddenly came up lacking. We prayed fervently for healing for our little boy, that his brain would be rewired to send signals of safety instead of fear, but nothing ever changed. And we began to break under the weight of our own inadequacies as our best parenting efforts failed day after day, until we barely resembled the healthy, competent people we once knew ourselves to be. I had never imagined there could be such darkness within me. But then I had never needed to.

Each prayer that went unanswered left me weakly holding off the lie that we had been forgotten by God.

We were unraveling. It seemed everywhere we looked we met suffering, and our deeply held faith could not help us. When we spoke to those around us or listened to teachings from pastors within our circle we were usually told to keep praying for healing, even though each prayer that went unanswered left me weakly holding off the lie that we had been forgotten by God. At best we found sympathy and encouragement, but it was a drop of water in a dry, bottomless well; it was never enough. Despite the best intentions from salt-of-the-earth people, we felt broken, misunderstood and terribly alone.

My husband was fairly well versed in church history and began referring to Catholic teaching from time to time, especially as it pertained to redemptive suffering and the implications of Jesus’ incarnation for humanity. I was surprised to discover a rich theology of suffering that I had never heard before and could not stop thinking about how the Passion of Christ united Christ to other human beings in a way I had never deeply contemplated. We began reading the works of Jean Vanier and Dorothy Day, devouring their understanding of the human experience. We bought a copy of the Catechism of the Catholic Church on Amazon. We signed up for the Rite of Christian Initiation of Adults. It couldn’t hurt, we thought. We’ll just see what happens.

We were particularly intrigued by the Catholic Worker movement. In the 1930s, co-founders Dorothy Day and Peter Maurin had pioneered the idea of creating a community that would open its doors and its arms to those on the margins of society by treating them with the dignity already bestowed on them as image-bearers of God. Peter Maurin famously envisioned a society “where it is easier for people to be good.” There are now hundreds of Catholic Worker communities around the world, and from time to time we would toss around the idea of visiting one.

That day came sooner than I expected. Halfway through R.C.I.A., my husband was browsing the Catholic Worker website and discovered a new listing. There was a brand new house of hospitality right in our little city of Denton, Tex. We felt a jolt of hope. We were at the Day House within the week.

The Denton Catholic Worker Day House—a play on words to simultaneously honor the movement’s founder and communicate the open hours of the house—was a rundown rental property on a busy street near the center of town. No one spent the night inside, including the three single men who ran it, but the doors were open from dawn until dusk for those who needed a place to shower, cook, nap and socialize. There were scheduled times for yoga class, night prayer, lectio divina and community dinner, to which all were invited but none were forced. The majority of those who frequented the house were homeless, though some had apartments. There were several college students with eager eyes, and then there was our transracial family of four. A ragtag collection of human beings if ever there was one.

The foundational principles of the Day House were simply those of Catholic social teaching: Every human being is made in the image of God; therefore every human being has inherent dignity and equal worth. The concept was not new—every Christian, if asked, would hopefully assent to something similar. It was the acting on it that was new. It is easy to apply this tenet when defending the dignity of an innocent, unborn child. It is not always as easy to apply it when the child has grown up, is 40 years old and owns too many addictions and too few clothes.

There were no awards or accolades for piety here, only the sincerely held belief that the face of Christ shines through the people whom society has made no room for.

Holding close their principles of nonviolence and voluntary poverty, men and women younger than ourselves were daily showing us what it meant to live out the works of mercy. Theirs was the kingdom of God: a messy, imperfect, upside-down world where the powerful humbled themselves to become servants of the needy. In fact, so deep was the conviction that often it was hard to discern between the privileged and the impoverished. Even the word “homeless” failed to distinguish because there were those who lived in their vans voluntarily. There were no awards or accolades for piety here, only the sincerely held belief that the face of Christ shines through the people whom society has made no room for.

Once, I stood with Andres, one of the three founders of the house (he would later become my younger son’s godfather), discussing a tragic situation he had responded to the night before. One of our friends from the Day House had been raped, and Andres had been in the hospital with her for much of the night. There was talk amongst people that she was lying, and I had asked him whether he thought her story was true. There at the kitchen sink, he continued to scrub dishes but paused thoughtfully. “I don’t know if her story is true,” he said. “But I know she’s suffering, and she needs mercy.” His words weren’t just true of the woman who may or may not have been raped, or of Samantha, who lived in a tent by the river. His words were true of me.

My husband and I almost literally fell into the arms of this community upon meeting them that winter, so weary were our souls. They recognized the sorrow in our eyes, some because it shone in theirs as well and others because they had become accustomed to gazing at it, and they welcomed us in. They had little and we had much, yet they fed us anyway. Young and old, educated and mentally impaired, healthy and addicted, they wrapped strong and weak arms around us and they held us up. There was no room left at their table, but they pulled up hay bales for us anyway.

It was not perfect: People are people, addictions are addictions, sin is sin. But it was a safe space for love and for kindness, and I both witnessed and received those things from seemingly unlikely vessels.

Young and old, educated and mentally impaired, healthy and addicted, they wrapped strong and weak arms around us and they held us up.

Spring came and found me jogging through my neighborhood, listening to the Stations of the Cross reverberate through my headphones. It was Lent, and I only had two more weeks to decide whether I wanted to be confirmed at the Easter Vigil. Was I ready to pull the trigger quite yet? We would be the only Catholics in either side of the family. All of our lifelong friends were Protestant. Was I sure? I could always wait until next year. I mulled it over while I ran.

How to protest like a Catholic Worker
Maria Benevento

Witnessing the suffering of my son and shouldering my own had nearly broken me. In the darkness of that time, the seemingly singular focus on the Resurrection in my prior faith formation was just not enough. Catholicism had offered deep communion with a crucified God, a God who became man to suffer with us, a Christ who would go on to Resurrection but could first sit with me in my pain and understand. Because our incarnated Lord communed with me, I, too, could commune with human beings quite different from me. And not only that but I could receive the touch of Christ through their hands; I could see my suffering in theirs and we could both be healed just a little bit more. Because Christ became human, all humans belong to me and I to them.

Could I remain Protestant and carry this new fire within me? Of course. Did I want to? I did not. Everything I loved was Catholic, in the full sense of the word. My husband and I entered that little chapel on Holy Saturday, bent down on our knees, consumed the bread and the wine, the body and blood, the love of God for broken people. People like me.

This article also appeared in print, under the headline “How the Catholic Worker showed me what it means to be Catholic,” in the April 17, 2017, issue. 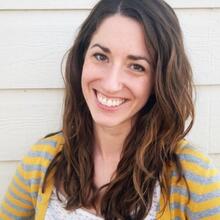 Shannon Evans is a freelance writer and co-host of Upside Down, an ecumenical podcast.