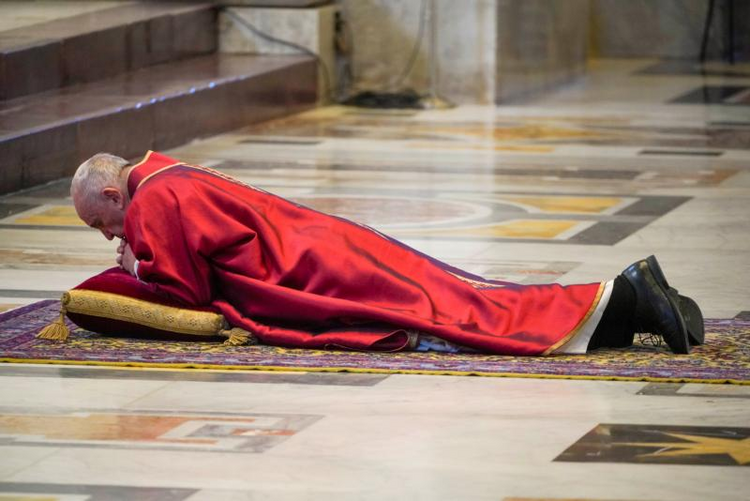 Pope Francis lies prostrate as he leads the Good Friday Liturgy of the Lord's Passion April 10, 2020, at the Altar of the Chair in St. Peter's Basilica at the Vatican. (CNS photo/Andrew Medichini, pool via Reuters)

VATICAN CITY (CNS) -- The coronavirus is not some form of divine punishment. but a tragic event that, like all suffering in one's life, is used by God to awaken humanity, said Capuchin Father Raniero Cantalamessa, preacher of the papal household, during Good Friday services in St. Peter’s Basilica on April 10.

"The coronavirus pandemic has abruptly roused us from the greatest danger individuals and humanity have always been susceptible to: the delusion of omnipotence," Fr. Cantalamessa said "It took merely the smallest and most formless element of nature, a virus, to remind us that we are mortal, that military power and technology are not sufficient to save us.”

Fr. Cantalamessa: "It took merely the smallest and most formless element of nature, a virus, to remind us that we are mortal, that military power and technology are not sufficient to save us.”

Pope Francis presided over the Good Friday Liturgy of the Lord's Passion at the Altar of the Chair in St. Peter's Basilica, which was nearly empty and completely silent. After processing into the sacred edifice in silence, the 83-year-old pope, aided by two assistants, got down onto his knees and lay prostrate on the floor before the altar in a sign of adoration and penance. Hands clasped under him and eyes closed, the pope silently prayed before a crucifix draped in red.

During the liturgy, the pope and a small congregation of nearly a dozen people stood as three deacons and a reduced Sistine Chapel Choir chanted the account of the Passion from the Gospel of St. John. As is customary, the papal household's preacher gave the homily.

Taking preventative measures into account, Pope Francis was the only one who took part in venerating the cross. After reverently kissing the cross, he stood behind it while those participating from a distance kneeled in adoration.

In his homily, Fr. Cantalamessa also said the Gospel reading of Christ's death "is the account of the objectively greatest evil committed on earth." While Jesus' Passion can be looked at from various perspectives, "the cross is better understood by its effects than by its causes." Christ's cross, he said, changed the meaning of pain and human suffering, in that both are no longer viewed as divine punishment or a curse. Instead, suffering "was redeemed at its root when the Son of God took it upon himself."

Fr. Cantalamessa: We should not allow "so much pain, so many deaths, and so much heroic engagement on the part of health workers to have been in vain."

"What is the surest proof that the drink someone offers you is not poisoned?" Father Cantalamessa asked. "It is if that person drinks from the same cup before you do. This is what God has done: On the cross he drank, in front of the whole world, the cup of pain down to its dregs. This is how he showed us it is not poisoned, but that there is a pearl at the bottom of it."

A Palm Sunday message from Pope Francis: Do not be afraid; you are not alone
Gerard O’Connell

While it can be a challenge to avoid the negative effects of the virus, including the death and illness of loved ones, he continued, the current pandemic should, like the crucifixion of Jesus, be viewed “more by its positive effects rather than its causes.” Another positive effect of the pandemic is the feeling of solidarity and unity around the world that has lessened the need for war and armed conflict. It is important, he noted, to not allow "so much pain, so many deaths, and so much heroic engagement on the part of health workers to have been in vain."

"Returning to the way things were is the 'recession' we should fear the most," he said. "Let us devote the unlimited resources committed to weapons to the goals that we now realize are most necessary and urgent: health, hygiene, food, the fight against poverty, stewardship of creation. Let us leave to the next generation a world poorer in goods and money, if need be, but richer in its humanity."