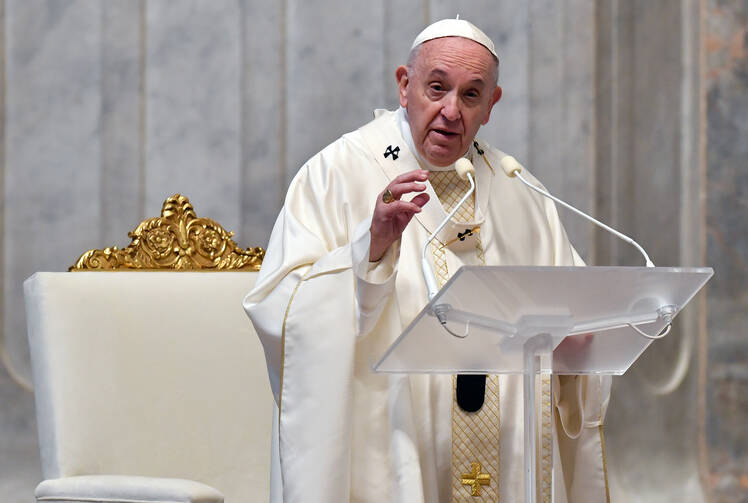 Pope Francis delivers the homily as he celebrates the Mass of Lord's Supper April 9, 2020, in St. Peter's Basilica at the Vatican. (CNS photo/Vatican Media via Reuters)

Pope Francis called on the more than 400,000 Catholic priests worldwide “to ask for forgiveness and to learn to forgive,” as he celebrated Mass in an empty St. Peter’s Basilica on Holy Thursday, commemorating the Last Supper of Jesus before his passion and crucifixion.

Because of the pandemic, liturgical celebrations with the pope have been pared down to the essential, eliminating or postponing optional rites and celebrations.

For Holy Thursday, the usual morning chrism Mass with Rome's priests was postponed to a later unspecified date; the optional foot-washing ritual was omitted; and the traditional procession with the Blessed Sacrament at the end of the Mass was also omitted, with the Eucharist placed directly in the tabernacle.

In the past, Pope Francis celebrated the Holy Thursday Mass in detention facilities, rehabilitation centers and with refugees. This year, the pope presided over the Mass in a vast and empty basilica with a handful of assisting deacons and priests. Wearing white vestments and accompanied only by the master of ceremonies, Monsignor Guido Marini, and a bearded deacon, Francis spoke from his heart during the homily, without a written text and devoting his thoughts almost entirely to priests.

“Today, I wish to be close to priests, to all priests, from the most recently ordained to the pope,” Pope Francis said. “Today, dear brother priests, you are all with me at the altar.”

There were not more than 30 persons at the altar of the chair of St. Peter in the apse behind the main altar. They included 10 members of the Sistine choir and some nuns and lay people, a small congregation of about a dozen people, including Cardinal Angelo Comastri, archpriest of the basilica as he celebrated the Holy Thursday liturgy.

Because Holy Thursday is usually the day priests renew their priestly vows at the morning chrism Mass, Pope Francis said he could not let the Mass of the Lord's Supper go by without remembering the world's priests.

“Today, I wish to be close to priests, to all priests, from the most recently ordained to the pope,” he said. “Today, dear brother priests, you are all with me at the altar…Today, I carry you in my heart, and I bring you to the altar,” he assured them.

“We are all anointed by the Lord,” Pope Francis said, “anointed to make the Eucharist, anointed to serve.”

So far more than 100 doctors have died in Italy in this work. He hailed them as “the saints next door.”

More than 100 doctors have died in Italy confronting Covid-19. Pope Francis hailed them as “the saints next door.”

He recalled with affection all those priests who are living “in far distant places” and revealed that one of those, a Franciscan priest, had written to him recently, telling Pope Francis that he would be spending this Holy Week with the prisoners in a jail. These are priests “who proclaim the Gospel in faraway places and die doing so,” Francis said.

He added that a bishop recently told him that the first thing he does when he goes to mission lands is “to visit the cemeteries, to pray at the tombs of those priests—many of them young—who have given their lives there and died from the local disease or illness because they didn’t have the antibodies. These are the anonymous priests, whose names are not known.”

Francis also remembered the many priests who devote their lives to preaching the Gospel in the world’s rural or isolated areas, sometimes serving four or five parishes. He said one of them told him he knew the names of all the inhabitants of the villages he served and when Francis asked, “Really, you know all their names?” he said the priest had replied, “‘Yes, and I even know the names of their dogs!’”

Pope Francis said, “Today, I bring all of these in my heart to the altar” and also priests who have been subject to scorn or calumny. He said in these times that is something that “happens often, they cannot go out in the streets because people say bad things to them, referring to the drama that we have lived with the discovery of priests who have done very bad things,” in what read here as a clear reference to the abuse of minors by priests.

He said, some priests had told him “that they cannot go out of their house in clerical dress because they insult them,” but, he added, “They still continue [their ministry].”

At this point, Pope Francis said, “sinner priests, together with sinner bishops and a sinner pope should not forget to ask for forgiveness and to forgive.”

He added, “We are all sinners” and also mentioned “priests who suffer from crises, who do not know what to do, who are living in obscurity.”

He counseled his brother priests: “Do not be stubborn like Peter, let the Lord wash your feet. The Lord is your servant. He is close to you to give you strength, to wash the feet [of others].”

And “with this awareness of the need to be washed, you will be great at forgiving.”

He urged them to “be courageous, also in taking risks in forgiving, in consoling and, even if you cannot give your brother pardon in that moment, at least give him consolation and accompaniment and leave the door open to him to return.”