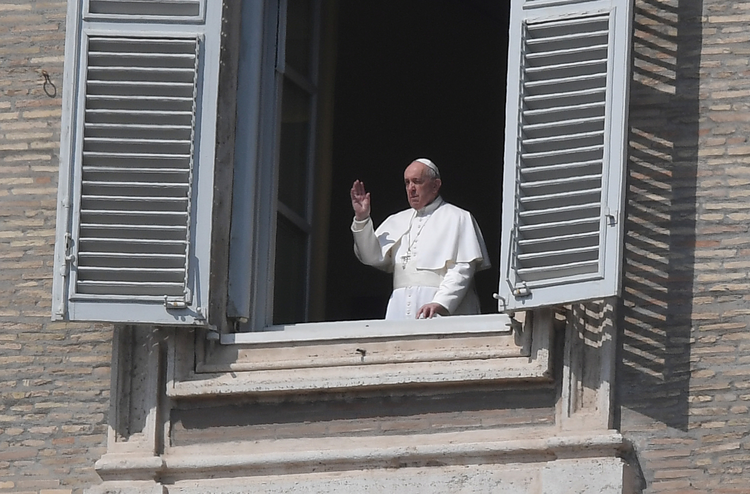 Pope Francis is seen in a window greeting a few nuns standing in St. Peter's Square at the Vatican March 22, 2020, after reciting his weekly Angelus prayer from the library of the Apostolic Palace. (CNS photo/Alberto Lingria, Reuters)

Pope Francis has called on the leaders of all the Christian churches, communities and confessions worldwide, as well Christians everywhere, to join together in praying the Our Father on March 25 to implore God to rid the world of the coronavirus pandemic that is wreaking havoc everywhere.

He also said that he would lead a prayer service from the front of St. Peter’s Basilica on March 27 and afterwards would offer a blessing “Urbi et Orbi”—“to the city of Rome and the world”—with the Blessed Sacrament.

Francis announced these two prayer events after midday on Sunday, March 22, after reciting the Angelus from the library in the Vatican’s Apostolic Palace, where he usually meets heads of state, religious leaders and distinguished persons.

“In these days of trial, as humanity trembles at the threat of the [coronavirus] pandemic, I would propose that all Christians join their voices together to heaven,” Francis told a virtual audience following on Vatican News Media.

“In these days of trial, as humanity trembles at the threat of the [coronavirus] pandemic, I would propose that all Christians join their voices together to heaven,” Pope Francis said.

“I invite the heads of the churches and the leaders of all the Christian communities, together with all Christians of the various confessions, to invoke the Almighty, the All Powerful God, by reciting contemporaneously the prayer that Our Lord Jesus has taught us,” he said.

“I therefore invite everyone to recite the Our Father at midday on March 25 next, on the day when many Christians recall the annunciation to the Virgin Mary of the Incarnation of the Word, so that the Lord may listen to the unanimous prayer of all his disciples that are preparing to celebrate the victory of the Risen Christ,” Francis said.

He also announced that he will preside over “a moment of prayer” from the steps of the basilica Saint Peter’s at 6 p.m. Rome time, next Friday, March 27. He said the square would be empty, but he invited people across the world “to participate spiritually” in this prayer which, he explained, would include readings from the Scripture and adoration of Jesus in the Blessed Sacrament.

He invited them to participate through “the means of communication,” that is, by television, radio or social media. He said that at the end of the prayer service he would give a blessing “Urbi et Orbi” with the Blessed Sacrament. Keen to share God’s mercy to people at this deeply troubling moment in human history, Francis said “the possibility of receiving a plenary indulgence” would be linked to the prayer service.

“We wish to respond to the pandemic of the virus with the universality of prayer, of compassion and tenderness.”

Pope Francis is of course deeply concerned about the spread of the pandemic and the terrible suffering it is causing to some 300,000 people and their families, as well as the fear it has provoked in countless millions across the globe, and the great damage it is doing also to the world’s economy. Last Sunday, he walked “on pilgrimage” on a deserted street in the center of Rome and prayed before two miraculous images, imploring God to rid the world of the coronavirus pandemic.

Today, he told his global audience: “We wish to respond to the pandemic of the virus with the universality of prayer, of compassion and tenderness.” He encouraged everyone: “Let us remain united. Let us make our closeness felt to those who are alone and to those who are most stricken.”

He told people, let us also express “our closeness to doctors, to health workers, nurses, volunteers” and “to the authorities that have to take hard measures, but ones that are for our good.”

He added, “let us show our closeness to the police, the soldiers who try to keep order always on the streets, so that the things the government orders for our good can be done,” indeed “let us be close to everyone.”

A coronavirus wake-up call in London as doors close all over town, churches included
David Stewart

The pope concluded his address by expressing his closeness to the inhabitants of Croatia, a country that was hit by an earthquake this morning, March 22.

He bade farewell by urging people to read the ninth chapter of St. John’s Gospel this Sunday, saying “it will do us all good.”

After delivering his message, Pope Francis went to the study window of the papal apartment of the Apostolic Palace and from there imparted his blessing to the empty St. Peter’s Square and to people worldwide.

At his morning Mass, in the chapel of Santa Marta the Vatican guesthouse where he lives, which Vatican television transmitted to an audience of over 500,000 people (and even more by social media), Francis remembered the more than 13,000 persons who have died worldwide from the pandemic, including 4,825 in Italy, now the country with the largest number of deaths from the virus.

In his introduction to Mass, he told his virtual audience: “In these days we’re hearing the news of so many people who are dying…dying alone, without being able to say goodbye to their loved ones. Let’s think about them and pray for them. For families as well, who cannot accompany their loved ones on that journey. We pray in a special way for the dying and for their families.”