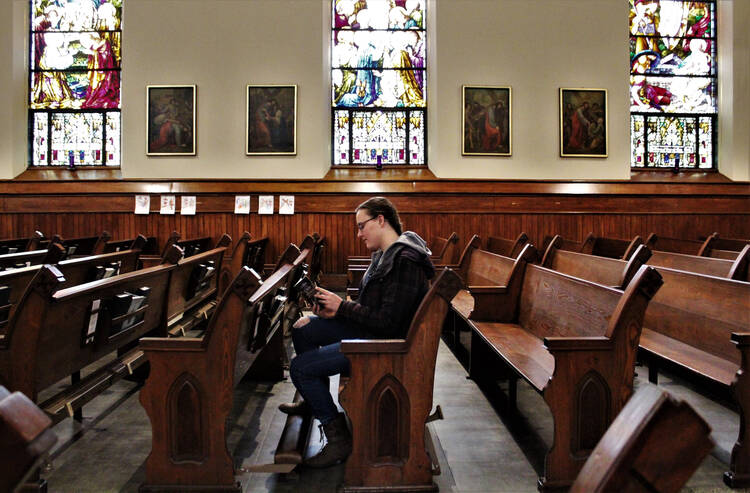 A woman reads a prayer book in the sanctuary of St. Mary Church in Appleton, Wis., on March 18,. Bishop David L. Ricken of Green Bay announced on March 17 that all public Masses in the diocese are suspended for the next four to eight weeks due to the coronavirus pandemic. (CNS photo/Brad Birkholz)

It started off as a trickle, with only the Archdiocese of Seattle—located in one of the hardest-hit regions in the nation in terms of the coronavirus—announcing on March 11 that it would suspend public Masses to help slow the spread of Covid-19. Then the announcements from other dioceses followed in a deluge: The Archdioceses of Washington, Newark, Chicago and Boston announced similar suspensions less than two days later. In less than a week, with more than 10,000 cases of Covid-19 reported in the United States, nearly all of the nation’s Catholic dioceses suspended public Masses—and several confirmed that the suspension would run through Holy Week and Easter.

Church leaders are responding to this new reality by live-streaming Masses, pointing to online spirituality resources and even adjusting how confession works to respond to the reality that many Catholics cannot leave their homes.

Part-time church workers have seen their income halted, major charities are worried about missed collections, and at least one diocese has temporarily laid-off employees.

But when it comes to church finances, parishes and those who work in them are facing an uncertain future the longer the crisis drags on. Part-time church workers have seen their income halted, major charities are worried about missed collections, and at least one diocese has temporarily laid-off employees.

Julia Strukely is a religion teacher at a Catholic middle school in Virginia. On the weekends, Ms. Strukely is a fill-in accompanist in a few parishes around Richmond. She said she usually plays up to three Masses and brings in about $300 per week. But with no Masses being held in her diocese until further notice, Ms. Strukely will not receive that pay.

“It’s extra money to put in savings or to pay bills that come at the end of the month,” Ms. Strukely said. Not having that money “will impact me soon,” she added.

With more than 17,000 parishes in the United States, Ms. Strukely is likely far from alone when it comes to a temporary loss of income. Steve Petrunak, the president of the National Association of Pastoral Musicians, said that he has heard anecdotally from members who work full-time in parish music ministry that they will continue to be paid through the shutdown, at least for now. Beyond those positions, however, there is more uncertainty.

“The cantors, the instrumentalists, those are the ones who are really taking the biggest hit at the moment because it’s those people who are paid through stipends,” he said.

If the crisis continues too long, Mr. Petrunak said, he worries the economic impact at parishes could move beyond freelancers. “If you think of the struggling communities, how long can they go before they’re going to have to make decisions about church personnel and parish personnel?” he asked.

The economic impact could also affect the church’s charity work.

This weekend, parishes throughout the United States were prepared to host a special collection for Catholic Relief Services, the international development arm of the U.S. Conference of Catholic Bishops. The collection brought in more than $16 million in 2018, according to data from the U.S.C.C.B. With Masses not happening in most of the United States this weekend, much of that funding could be in jeopardy.

”How long can they go before they’re going to have to make decisions about church personnel and parish personnel?”

“With the situation in flux and so much uncertainty, we don’t know what the impacts on giving could be,” Mark Melia, the executive vice president of charitable giving for C.R.S., said in a written statement. “However, around the world CRS is helping our Church partners to respond to this crisis in creative ways. Given the adverse economic implications, donors likely too will be facing economic challenges themselves.”

In addition to the collection, many Catholics participate in the Lenten Rice Bowl program to benefit C.R.S., collecting spare change during the 40 days of Lent and donating it around Easter. Since the program’s inception more than 40 years ago, it has raised more than $250 million.

Mr. Melia said in his statement that this fundraiser could be “adversely impacted” by the suspension of Masses, and he acknowledged the “uncertainty” and “unpredictably” about the collection. But, he added, “we know for sure that Catholics including our donors are deeply committed to caring for the most vulnerable around the world and seek to do good even in the most challenging of times.”

The loss of collection dollars to parishes is already more than a hypothetical.

The Diocese of Providence confirmed in an email, for example, that the “pandemic crisis has required a temporary reduction to our staffing and limited personnel will be working from home to support our schools, parishes and other agencies.” At parishes that rely on weekly collections to cover payroll and other bills, the implications of suspended Sunday Masses could be dire.

Take the Church of St. Paul the Apostle in Manhattan. On March 8, nearly every pew was filled with worshipers. The severity of the coronavirus pandemic was just emerging, and the presiding priest announced that those gathered should refrain from shaking hands during the exchange of peace; he also said that Communion wine would not be offered. Beyond that, Mass proceeded as normal. But by the following Sunday, the Archdiocese of New York had suspended public Masses and the parish had gone dark. On March 17, the pastor emailed parishioners to bring them up to speed on the financial challenges that just a single week without Masses presented—and to ask them to sign up for automated online giving.

“We all still have bills to pay, and the Church is no different from each one of us personally,” Rick Walsh, C.S.P., wrote. “This hardship has led us to take the difficult steps of tightening our belt by reducing our staff and limiting the parish center office hours.” A normal weekend would raise about $10,000, but with no Masses and only online donations, contributions were down by more than 50 percent.

A normal weekend would raise about $10,000, but with no Masses and only online donations, contributions were down by more than 50 percent.

According to the email, the parish already laid off a full-time maintenance worker and its part-time bookstore employees, and it is now paying the equivalent of two salaries to the three Paulists who work at the parish. Though the hope is that the employees can be hired back after the crisis subsides, Father Walsh wrote, “There may well be more measures to come.”

As for how long Masses will be suspended, no one really knows. Some parishes are reaching out to parishioners, asking them to increase their offering if they are able and encouraging them to sign up for online giving. Some parishes that are streaming Masses, such as St. Francis Xavier in New York, are asking viewers to contribute with Venmo, the cash-transferring phone app.

Patrick Markey, the executive director of the Diocesan Fiscal Management Conference, told Catholic News Service that the toll on parishes and dioceses as a result of the suspended Masses will be painful.

“It’s a big hit, and it’s gonna hurt,” he said, noting that many dioceses rely on income from parish collections and may not be able to support parishes for too long as their reserves dwindle.

“They’ll want to pay everybody, but they have to be realistic about that,” Mr. Markey said. “In the short term, they can continue making payroll to all of the employees, but at some point, they’ll have to start looking at other options.”

Father Walsh, the pastor at the Church of St. Paul the Apostle, acknowledged that “the ramifications of [the pandemic] are tremendous.” But, he added, it has also shown people how interconnected we are as human beings, and that, he said, reminds him that “the big picture is hope.”