A coronavirus wake-up call in London as doors close all over town, churches included 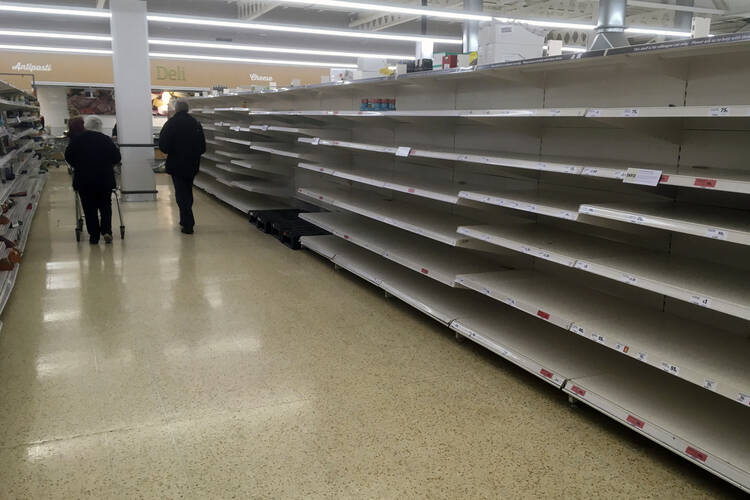 Shoppers walk past empty shelves in a supermarket in Rugby, England, Thursday, March 19, 2020. Supermarkets are limiting the number of similar items shopper can buy to try and halt hoarding and panic buying. According to the World Health Organization, most people recover in about two to six weeks, depending on the severity of the illness. (AP Photo/Martin Cleaver)

Our northeast London Jesuit parish church, where I am a part-time member of the pastoral team, sits under two flight paths, one into Heathrow and one into London City Airport. Planes can be expected along those air highways usually about a minute apart. But this week there are hardly any planes, and their absence is noticeable.

There is traffic on the busy High Road outside, but the red London buses are all much emptier. The kids in the primary school next door are still whooping and screaming at break time, like they are meant to do; but why are they still there?

Many people think that the schools should have been closed by now, as in most other countries, including in Scotland, where schools have been ordered closed from the end of this week right through summer. The U.K. education secretary on March 18 finally issued the order for schools to shut down “until further notice,” beginning March 20, to curb the spread of coronavirus.

Cardinal Vincent Nichols has asked the faithful to “dig deep into our traditions and our resources to make sure that our prayer maintains a eucharistic heart and a eucharistic center.”

In all four nations of the United Kingdom, Mass is still to be celebrated, but no congregation is to be physically present. In London, Cardinal Vincent Nichols has asked the faithful to “dig deep into our traditions and our resources to make sure that our prayer maintains a eucharistic heart and a eucharistic center,” citing a tradition, little engaged in recent times, of “spiritual communion” as one resource. Other suggestions, as in many cities and countries worldwide, include making use of Masses streamed online. But in our parish, we know that online access is not something guaranteed for every household.

Our pastor at St. Ignatius, Andrew Cameron-Mowat, S.J., is troubled by some aspects of these decisions. “As the parish priest of a busy church I have been asked by our conference of bishops to celebrate Mass daily in our church in the absence of a congregation,” he said. “This will be an entirely new experience for me in my 28 years as a priest.”

Father Cameron-Mowat, who in addition to his pastoral duties is a liturgy instructor at the diocesan seminary, added, “It is not something I plan to get used to, and I hope that this inadequate interpretation of the sacrament of the Eucharist will be balanced with prayer at home, lectio divina and other prayers of our liturgy in which our people can participate remotely.”

We usually hope that our liturgy expresses and informs how we live all the time rather than for an hour on a Sunday and that the real presence of Christ is constant, not sporadic. The Second Vatican Council’s “Sacrosanctum Concilium” wonderfully instructed that real presence is found in four modes—one is in the people gathered for the Eucharist. We will have to start finding that same real presence in the people dispersed, not gathered, beginning now.

If fear of contagion means we cannot be physically near others, we can still be close in prayer. That is what I try to remember for myself and tell anyone who is still coming to our door. And I try to repeat what Ignatius taught us—that fear never comes from God.

If fear of contagion means we cannot be physically near others, we can still be close in prayer.

We will all have to stay at home, praying there. And we, the parish clergy, promise to pray for our parishioners even as we are saddened with worry that we might not be able to visit our people in their homes or at the hospital. We are not sure.

We will not be able to see that presence in the faces of the teenagers receiving the sacrament of confirmation—at least not for some time. We are asking ourselves how we are going to celebrate the glorious Easter sacraments and what to say to our catechumens. We are trying to work out how to conduct funerals, too, quietly acknowledging that this disease will likely lead to many of them before it is defeated.

We are a small Jesuit community here, that just got smaller because the provincial has quickly moved some older Jesuits with underlying health concerns away to our health care community on the south coast. The reduced number that remains could face lockdown if any one of us starts to show symptoms, but even then the so-called private Masses would probably continue, as long as we have breath in our bodies. Every day, every hour, brings a fresh development, and, of course, nobody has ever known the like of this before.

Beyond the church doors, London’s response has felt more numb than defiant. That is not the city’s preferred self-image, on display in recent years when it has suffered terrorist attacks. The mood here has felt more like shell shock as wave upon wave of events were canceled.

London’s response has felt more numb than defiant. That is not the city’s preferred self-image, on display in recent years when it has suffered terrorist attacks.

Londoners have watched their social and civic life fall like tumbling dominoes as organized sports were halted and theaters and concert halls closed their doors. The managers of these public venues, including the organizers of the massive London Marathon, had raced ahead of the initial government response by deciding on their own to call a halt to social gathering.

Now Londoners have joined in the worldwide pandemic of panic-buying. As the shopper for our Jesuit community, twice I have seen aggressive behavior, anger and flailing fists at the market; once was over a pack of toilet paper rolls.

We must not allow the coronavirus to rob us of our humanity. How can we (safely) preserve it?
Michael Rozier, S.J.

Don’t ask for whom the Brexit bell tolls …
David Stewart

There have been many reports of selfish and, candidly, sinful behavior as baby formula powder has flown off the shelves, childless shoppers grabbing what they can. Big retailers have slowly begun to impose per-customer limits, but the damage has been done.

After the austerity years, there are many families in our parish and district who simply do not have the ready cash to contemplate panic-buying while government initiatives thus far look, from the perspective of those at rock bottom, designed more to help business than the poor directly, not least those working in what had been the growing “gig economy.”

It is halfway through Lent; Easter is still some way off, but toward the end of a week like no other, there are already green shoots, signs of new life. The early numbness might be fading; there are reports of spontaneous moves to set up neighborhood support initiatives. Suddenly, there is conversation about universal basic income—its time might have come.