Camus, community and coronavirus: What I’ve learned from self-quarantine 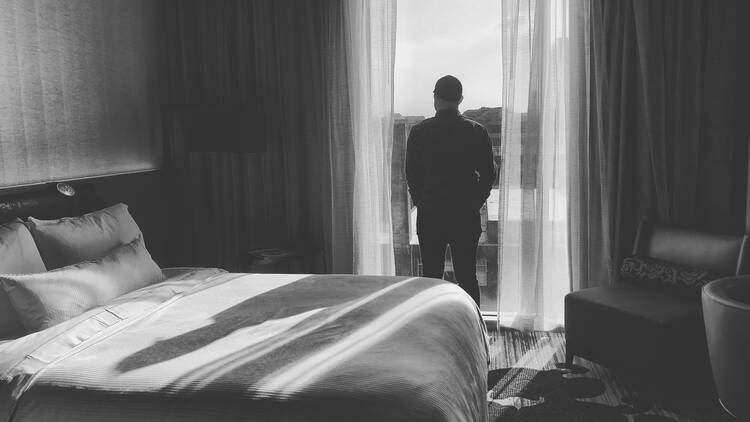 I am writing this column from my bedroom in New York on the seventh day of my self-quarantine. Last month I had the honor to co-lead America Media’s pilgrimage to the Holy Land with Father James Martin.

It was a grace-filled 10 days, which included trips to Galilee, Nazareth, Jerusalem and Bethlehem. That last excursion, to the place of our Lord’s nativity, is the reason for my isolation. The Palestinian authorities put Bethlehem on lockdown the day after our visit. Out of an abundance of caution—to use the now ubiquitous cliché—the four of us from America’s staff who attended the pilgrimage are now in self-quarantine.

It’s a strange sort of thing: I have withdrawn from the community for the sake of the community. It seems counterintuitive, if not absurd, at least in the philosophical sense. So I decided this week to consult the master of the absurd, Albert Camus, and his 1947 novel, The Plague, which describes an outbreak of a deadly pestilence in French Algeria.

Camus shows how the various townspeople react to the growing threat in their midst, describing their trajectory from vague indifference to existential crisis as the plague claims more and more of their neighbors.

Father Paneloux, the Jesuit in the novel, does not come off well, at least not at first. The priest is well-respected, but as questions of life and death progress from the conceptual to the terrifyingly real, his philosophical musings and pious platitudes are less and less helpful.

“Paneloux is a man of learning, a scholar,” says the more scientifically minded character, Doctor Rieux. “But every country priest who visits his parishioners and has heard a man gasping for breath on his deathbed thinks as I do. He’d try to relieve human suffering before trying to point out its goodness.”

It is a fair point. I’ve heard variations on it before, often in connection with priests, and Jesuits in particular. We sometimes enjoy the luxury of being aloof—hovering above the real like uninstantiated Platonic forms.

On the other hand, priests and religious are often those who are the most deeply entrenched in the real. The countless men and women who form the outstretched arms and helping hands of the church do not need to be reminded that no one is ultimately spared from the ravages of life. Prick us and we will bleed. Even Father Paneloux discovers that in the end.

As Camus reminds us, a plague presents an existential crisis for each of us. But it also presents an opportunity to learn anew, or for the first time, that our destinies are inextricably intertwined and that it is precisely this reality that calls us into being, that calls us out of darkness and into light.

A plague presents an existential crisis for each of us. But it also presents an opportunity to learn anew, that our destinies are inextricably intertwined and that it is precisely this reality that calls us into being.

“What’s true of all the evils in the world is true of plague as well,” Camus wrote. “It helps men to rise above themselves.”

I should tell you, by the way, that I am fine, as are my colleagues. As of this writing, no one who accompanied us on the pilgrimage to the Holy Land has developed symptoms. Deo Gratias.

The following message for our readers was sent from America Media’s digital platforms on March 12, 2020. We reproduce it here, for your information:

Due to the public health emergency, the headquarters of America Media in New York will close at 5 p.m., Friday, March 13, and will remain closed for the foreseeable future. All America Media employees will work from home.

There will be no disruption to the production and distribution of the print edition of America. Readers and subscribers should expect to receive their print issues according to the usual schedule. Digital coverage will be similarly unaffected.

Four years ago, America Media changed to an all-digital workflow and production process. This allows the editors and staff to prepare the magazine and to send it to the printer from remote locations.

As we continue our work, we also pray for the health and well-being of all our fellow citizens and for people throughout the world who have been affected by this crisis. If you would like to join us, you can find a special prayer here.

As we continue our work, we also pray for the health and well-being of all our fellow citizens and for people throughout the world who have been affected by this crisis.

For 111 years—through two world wars, the Great Depression, 9/11—America magazine has been a witness to our national life. Our experience has taught us this: We can rely on the essential goodness, charity and courage of the American people to meet the challenge of a perilous hour.

Above all, we have faith in the One who ultimately guides our earthly pilgrimage; the One of whom St. Paul wrote in his Letter to the Philippians: “I can do all things through him who strengthens me.”