Pope Francis prays the rosary, imploring God to rid Italy and the world of the coronavirus pandemic 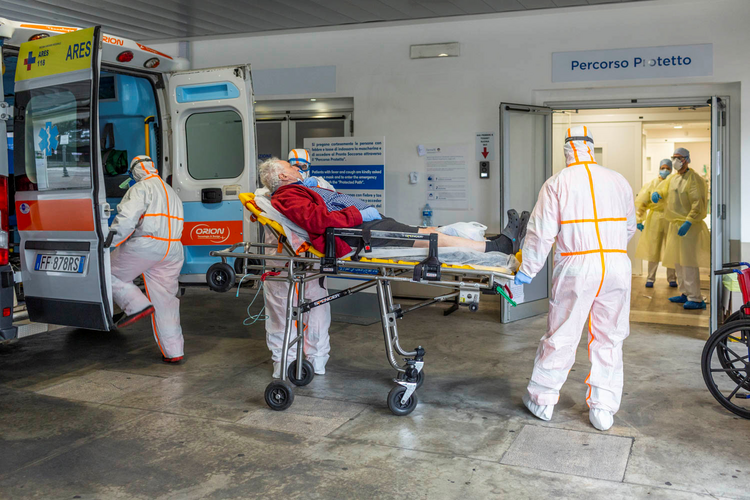 “In this unprecedented situation, in which everything seems to be crumbling, let us help each other to hold fast to what really counts,” Pope Francis said in a video message as he joined the pastors, the families and the faithful of Italy in praying the rosary at 9 p.m. Rome time on March 19, the feast of St. Joseph. Pope Francis implored God to remove the coronavirus pandemic from Europe and the world and from Italy, which has surpassed China as the country with the most Covid-19-related deaths.

He revealed that many pastors had written to him telling of their efforts to accompany their people “in such a dramatic moment” and to sustain “the hope and faith” of people. He said he considered this national prayer “a sign of unity for the whole country.”

The pope was aware that Italian bishops have invited families across the country not only to pray together at the same time but also to place a lighted candle in the window of their home or to hang a white cloth from their balcony as a sign of hope. He knew, too, that TV2000, the Italian Catholic television channel, would broadcast the event nationwide.

Francis said, “The prayer of the rosary is the prayer of the humble and of the saints who, through its mysteries, contemplate with Mary the life of Jesus, [who is] the merciful face of the Father.” He added, “And how much we all need to be truly consoled, to feel ourselves surrounded by the presence of his love.”

Pope Francis said, “The prayer of the rosary is the prayer of the humble and of the saints who, through its mysteries, contemplate with Mary the life of Jesus, the merciful face of the Father.”

He said the proof that people experience this consolation and love is shown in the way “we relate to others, which in this moment coincides with our closest family members.”

He encouraged people “to be close to one another, by being the first to show charity, understanding, patience and pardon.” Recognizing that everyone is “confined within the walls of our homes,” Pope Francis urged people to “have a bigger heart, so that the other always finds you available and welcoming.”

This evening’s bulletin from Italy’s Civil Protection Agency highlighted the dramatic situation in which this nation of 60 million people finds itself; the numbers underlined for believers the great need for prayer as well as the assistance of medical science. The agency reported that the total number infected by the virus since the beginning of the emergency in Italy on Feb. 21 is now at 41,035. It said the number currently with the virus is 35,713, an increase of 15 percent in the past 24 hours.

But it is the death tally that is truly disturbing. The agency reported that 3,405 people have died as a result of the virus since Feb. 21; that is more than have died in China since the start of the epidemic there in December. In fact, yesterday was the worst day in terms of deaths in Italy: A total of 475 died—the highest number of any country in a single day. While today’s death toll is slightly lower—427—it is a sign that the pandemic has not yet peaked in here.

Pope Francis told his nationwide audience, “This evening, let us pray together, entrusting ourselves to the intercession of St. Joseph, the guardian of the Holy Family and the guardian of every family.”

The report’s only consoling notes are the facts that 4,440 people have fully recovered so far and that the Italian government has authorized some 10,000 medical students who have just graduated to work in the national health service to combat the virus. Another 6,000 people have come forward as volunteers to assist the health service.

In his video message, Pope Francis told his nationwide audience, “This evening, let us pray together, entrusting ourselves to the intercession of St. Joseph, the guardian of the Holy Family and the guardian of every family.”

He reminded them that “the carpenter from Nazareth knew the precariousness and bitterness [of life] and the concern for tomorrow, but he also knew how to walk in the darkness of certain moments, by letting himself be always guided without reserve by the will of God.”

He concluded with a prayer he had composed to St. Joseph, to whom he has a great personal devotion and on whose feast day in 2013 he chose to inaugurate his Petrine ministry. He began by asking the saint’s intercession to God to “protect this nation” and “enlighten those responsible for the common good, so that they may know—like you—how to care for the persons entrusted to their responsibility.”

He appealed to St. Joseph “to grant the intelligence of knowledge to all who are researching for adequate means [to ensure] the health and the physical well-being of their brothers and sisters.”

He implored the saint to “sustain those who are spending themselves to help the needy: the volunteers, the nurses, the doctors, who are in the front line in curing the sick, even at risk to their own lives.”

He prayed to St. Joseph “to bless the church, starting with her ministers, and make her the sign and instrument of your light and goodness.”

He appealed to the saint to “accompany families” with his silent prayer and “build harmony between parents and children, and especially the youngest ones.” He invoked the saint to “preserve the elderly from loneliness, and [ensure] that no one falls into the desperation of abandonment or discouragement.”

He implored the saint to “console the most fragile, encourage the waverer, intercede for the poor.”

Pope Francis concluded his prayer by imploring St. Joseph, together with the Virgin Mary, “to plead with the Lord so that he may free the world from every form of pandemic.”