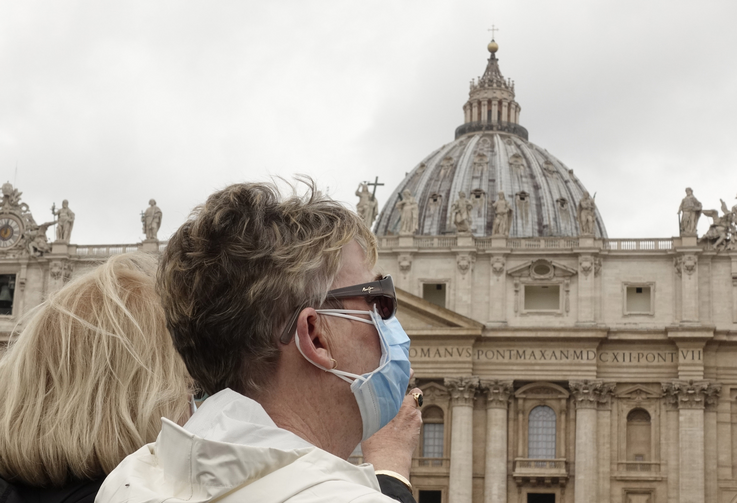 A woman wearing a mask for protection from the coronavirus watches as Pope Francis leads the Angelus from the window of his studio overlooking St. Peter's Square at the Vatican March 1, 2020. (CNS photo/Paul Haring)

The Vatican has announced that Pope Francis will recite the Angelus on Sunday, March 8, from the library of the Apostolic Palace rather than from the usual location of the papal study window overlooking St. Peter’s Square. These changes are part of efforts to limit the transmission of coronavirus in Italy, corresponding to the Italian government’s restrictions on large public gatherings. The Angelus will be streamed live by Vatican News and made available for media distribution by Vatican Media.

The Vatican also announced that the general public audience on Wednesday, March 11, will take place in the same way; the pope will address the faithful from the library where he meets heads of state and distinguished visitors. Vatican News will stream video of his address so that all who wish can follow it.

This means that the 83 year-old Pope Francis, who is recovering from a bad cold not connected to the coronavirus, will speak from an enclosed protected area, thereby avoiding the risk—both to the public and also, in the case of the general audience, to himself—of exposure to the coronavirus, which is particularly dangerous to elderly persons. The Vatican spokesman, Matteo Bruni, responding to a report in Italian media that Francis had been tested for coronavirus, said that his cold was “running its course, without symptoms linked to other pathologies.”

As reported in America yesterday, these changes to the pope’s public appearances were widely expected following the Italian government’s decision on March 4 to combat and contain the spread of the coronavirus by closing schools and universities, cinemas and theatres and banning all sizable gatherings of people.

The Vatican confirmed this in its statement, it explained that the changes “were made necessary to avoid the risk of the spread of Covid-19 due to the gathering of people (that would happen) in the course of the security controls for entrance to the square.” It added that the Italian authorities requested this change. This was obvious because the Italian police are responsible for the security checks for all people entering St. Peter’s Square.

In addition to all this, the Vatican also announced that, in conformity with the measures decreed by the Vatican health services “the participation of the faithful” at the pope’s morning Masses at Santa Marta “will be suspended until March 15.” It said Pope Francis will celebrate Mass “privately” until then.

The date of March 15 is the one decreed by the Italian government for the ending of the closure of schools, universities, theaters, cinemas and public gatherings. It should be noted, however, that the Italian media is now predicting that the closure could be extended until April 3. If that were to happen, it is reasonable to presume that the Vatican would also extend the above measures regarding the Sunday Angelus, public audiences with the pope and participation at Pope Francis’ morning Mass in Santa Marta.

While the video streaming of the Angelus and Wednesday public audience will mark a historical first, technology has been used to transmit the papal Angelus before. Pius XII recited the Angelus for the first time by radio on Aug. 15, 1954, from Castel Gandolfo, which was then the papal summer residence. The tradition of the pope reciting the Angelus and greeting the faithful from the papal study window on the third floor of the Apostolic Palace started in autumn 1954, and has continued since then except for the times when John Paul II was hospitalized following the assassination attempt on his life, May 17, 1981. He greeted the faithful and prayed with them from his hospital bed four days after that attempt. Furthermore, John Paul II, Benedict XVI and Francis have recited the Angelus from other places besides the Apostolic Palace, as frequently happens during papal visits to foreign countries.

As America reported, the Vatican yesterday confirmed its first case of coronavirus. Commenting on that case today, the Vatican spokesman, Matteo Bruni, told ANSA, the Italian news agency, that to date there has been only one case of a person who tested positively for coronavirus, not several as some media had reported. He explained that a second suspect case in the Vatican’s Secretariat of State had tested negative for coronavirus. The suspected case had led to yesterday’s temporary closure and sanitizing of the offices of the Secretariat of State on the third floor of the Apostolic Palace.

The case that “resulted positive” related to a participant at the events promoted by the Pontifical Academy of Life in the Vatican’s new synod hall and in the Auditorium of the Conciliazione from Feb. 26-28. All the participants at the meeting were informed, the academy stated. As a result of this case a number of persons were put in quarantine.