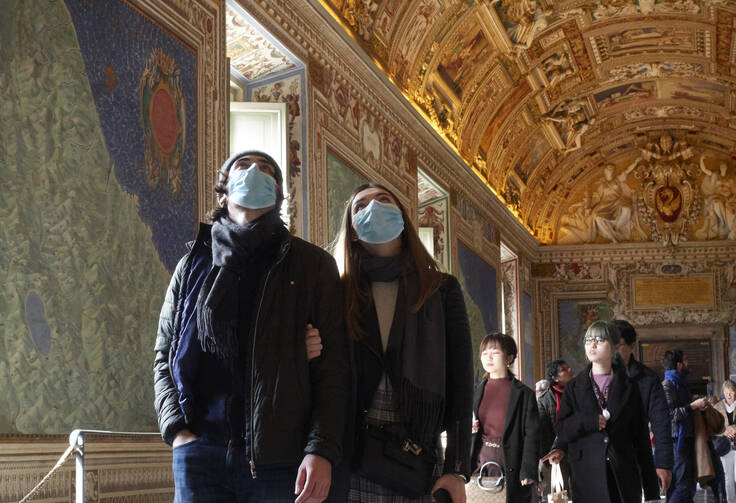 People wearing masks for protection from the coronavirus tour the Vatican Museums at the Vatican Feb. 29. (CNS photo/Paul Haring)

The Vatican announced today that a patient at its health services center had tested positive for coronavirus the previous day, March 5.

The Vatican spokesman, Matteo Bruni, broke the news this morning, March 6, and said the normal services of the health and hygiene sector of the Vatican city-state were “temporarily suspended” following yesterday’s positive test for Covid-19 on one patient in order “to sanitize the areas.” He confirmed that the city-state’s emergency health services will continue functioning and added that the Vatican health authority had informed its Italian counterpart regarding the case.

It should be noted that all Vatican employees, both clerical and lay, can use the city-state’s health services. Moreover, family members of lay employees are also entitled to use these services and do so.

Several sources also reported that offices of the Vatican’s Secretariat of State, on the third floor of the apostolic palace, were temporarily closed this morning following yesterday’s finding, but the Vatican has not yet confirmed this.

The normal services of the health and hygiene sector of the Vatican city-state were “temporarily suspended” following yesterday’s positive test for Covid-19 on one patient in order “to sanitize the areas.”

Students at the Pontifical North American College in Rome, however, “plan to continue in residence at the college,” according to an announcement on the college’s website. It said that during this time “the in-house formation program will continue with supplemental periods for prayer, recreation and study.”

Rome is now caught in the grip of uncertainty and fear about what may happen next. There are few people on the streets by day or night and few customers in shops or restaurants. The cinemas and theaters are closed and concerts have been suspended as large gatherings of people are prohibited by the government.

There are also reports in the Italian media, as yet unconfirmed by the Vatican, that Pope Francis will recite the Angelus and greet people next Sunday by Vatican TV and social media, instead of appearing at the papal study window on the third floor of the apostolic palace to greet people in St. Peter’s Square, given the Italian government’s ban on any large public gathering. The Vatican has yet to confirm or deny these reports but has said it is working hand in hand with the Italian government to help contain the spread of the virus.

While no policy to prevent the spread of coronavirus has been made public by the Vatican, an Italian journalist posted on Twitter a copy of what he said were the preventative measures issued by the Vatican City State governor's office.

The measures, dated March 6, said the Vatican health service issued guidelines on Feb. 25 on how to prevent the spread of the virus and that those guidelines “should be posted in every office and at the entrance of services open to the public.”

It also suspended “meetings and social events involving health personnel or personnel in charge of essential public services” within the world's smallest country.

With reporting from CNS