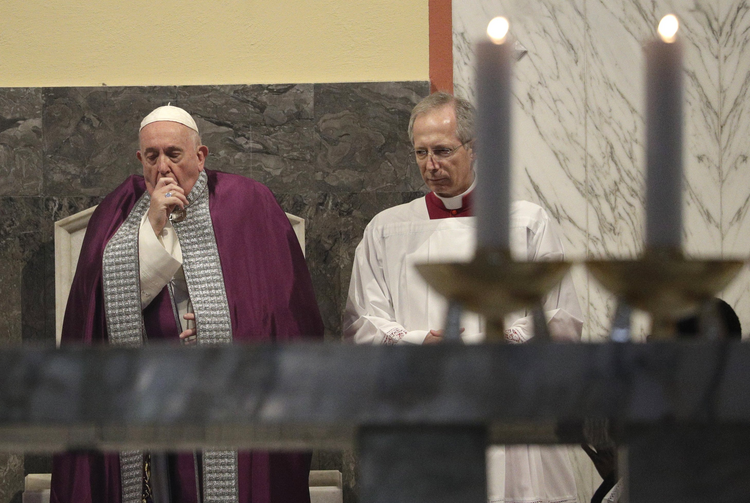 VATICAN CITY (RNS) — Pope Francis has tested negative for the coronavirus, according to an Italian newspaper. The 83-year-old pontiff had been coughing and feeling sick from a cold that started late last week and he canceled several meetings at the Vatican.

On Tuesday (March 3), the Italian newspaper Il Messaggero reported that Francis tested negative for the coronavirus, which had one of its largest global outbreaks in northern Italy. The article doesn’t include any source or quote, and Vatican spokesperson Matteo Bruni told Religion News Service on Tuesday that for the moment there is “no comment” regarding the pope’s health and whether he did the test for the coronavirus.

During the weekly Angelus prayer on Sunday, Francis had told faithful that he would not be able to attend the Lenten retreat this week with the Roman Curia in the town of Ariccia, not far from Rome. This is the first time the pope has not taken part in the meditations.

Italian media outlets quickly reacted to the news and published articles questioning whether the pontiff, who had part of a lung removed due to life-threatening pneumonia in his youth, had contracted the virus. The elderly and people with preexisting respiratory and health conditions are at higher risk of succumbing to the coronavirus.

Italy has reported more than 1,800 cases of the China-born virus and 66 people have died while nearly 150 have recovered, while the rest allegedly remain in quarantine. Most of the cases were reported in northern Italy, near Milan and Venice. In Rome a dozen people so far have been infected by COVID-19 and were quickly put under quarantine.

At the Vatican it’s been business as usual. Guards and employees within the walled city state have not been wearing masks. But an internal Vatican email on Monday stated that a member of the Roman Curia had been quarantined because he came into contact with a priest who tested positive for the virus in France. As a result, the community of San Luigi dei Francesi in Rome was briefly placed under quarantine.

“As a precautionary measure, the Health and Hygiene office of the Vatican City State has ensured the sanitization and cleaning of our colleague’s work room and other community spaces,” wrote Paolo Ruffini, who heads the Vatican’s communication office, in the internal document released by the Korazym.org blog.

Bruni told Vatican News in late February that the Vatican has adopted health measures to respond to the coronavirus. Doctors and nurses are on call and hand sanitizers have been placed at every entrance, in compliance with Italian state and regional regulations, Bruni said.

He mentioned that some events congregating large crowds will be canceled. Conferences at the Pontifical Gregorian University in Rome and other universities have been postponed. A gathering of 2,000 students from all over the world scheduled for late March in the Italian town of Assisi, which would have included the participation of Pope Francis, has been moved to next November.

The Vatican museums, now exhibiting a special collection of works by Renaissance painter Raphael, have been progressively emptied, as coronavirus concerns are leading tourists to cancel travel to Italy. According to Il Messaggero, the Vatican Museum has seen a 60% decrease in visitors. Tourism has dropped overall in the country, risking wide-ranging financial repercussions since the sector represents 12% of Italy’s gross domestic product.