Some disappointed, some enraptured by Pope Francis’ ‘Querida Amazonia’ 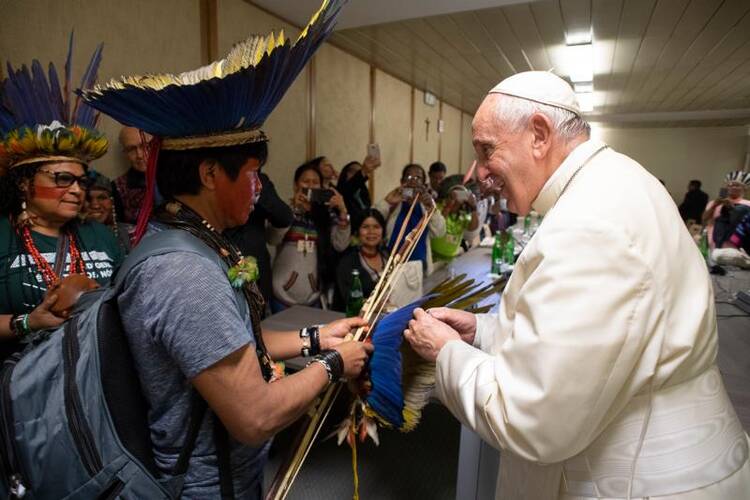 Pope Francis meets indigenous people from the Amazonian region during an encounter in the Paul VI hall at the Vatican Oct. 17, 2019. The meeting took place during the second week of the Synod of Bishops for the Amazon. (CNS photo/Vatican Media)

Pope Francis addressed a number of crucial issues facing the Amazon region in his apostolic exhortation “Querida Amazonia,” including poverty, injustice, threats to the environment and liturgical inculturation. “I dream of an Amazon region that fights for the rights of the poor, the original peoples and the least of our brothers and sisters, where their voices can be heard and their dignity advanced,” he wrote.

But many media outlets focused on what the pope’s exhortation did not do—that is, respond to a shortage of priests in the region by opening the door to the ordination of viri probati, or mature, married men of the community. Writing that “every effort should be made to ensure that the Amazonian peoples” have access to the Eucharist, especially in far-off areas, Pope Francis instead asked bishops to pray for more vocations, to enlarge the diaconate and to reform local processes of priestly formation.

The EWTN anchor Raymond Arroyo interpreted the pope’s letter as “a shock and a wakeup call to progressives who have sought ‘revolutionary change’ in the church.”

“Expect a ferocious response,” he tweeted.

“The pope simply kicked the can down the road. He doesn’t even mention the recommendation of the possibility of married deacons being ordained as priests, which was what the synod conclusions had suggested,” said Bishop Robert Flock of the Diocese of San Ignacio de Velasco, Bolivia, in an interview with the BBC. “As far as I’m concerned, even that was a non-starter because I don’t have any permanent deacons in my diocese, and the real challenge is how to provide the proper formation so that the people can take on these kinds of ministries in a serious way.”

The bishop stated that his diocese, which is 200,000 square kilometers, includes 25 parishes and only 30 priests. “I have all kinds of beautiful chapels where priests only celebrate Mass once a year.”

“[The pope] doesn’t even mention the recommendation of the possibility of married deacons being ordained as priests, which was what the synod conclusions had suggested,” said Bishop Robert Flock of the Diocese of San Ignacio de Velasco, Bolivia.

In an interview with America, Cardinal Michael Czerny, S.J., said the issue of allowing married men to become ordained remains an area for further discussion in the church. Cardinal Czerny, who served as special secretary of the synod, said that the pope’s message should be read alongside the proposals included in the final documents of the Synod of Bishops for the Pan-Amazon Region, which concluded last October. “The church in the Amazon, and indeed the church everywhere, is welcome and invited to consider all of the proposals,” he said, “so the ‘Querida Amazonia’ doesn’t resolve or close any of the questions.”

Pope Francis to U.S. bishops: Some will be disappointed by exhortation
Catholic News Service

Archbishop José H.Gomez of Los Angeles, president of the U.S. Conference of Catholic Bishops, wrote in a statement released on Feb. 12 that Pope Francis has provided “a hopeful and challenging vision of the future of the Amazon region.”

“The pope reminds us that the church serves humanity by proclaiming Jesus Christ and his Gospel of love, and he calls for an evangelization that respects the identities and histories of the Amazonian peoples and that is open to the ‘novelty of the Spirit, who is always able to create something new with the inexhaustible riches of Jesus Christ.’”

The archbishop did not directly address the controversy surrounding the issues of celibacy and women’s ordination, but he found a message for North Americans in the Amazon exhortation from Pope Francis, who “calls all of us in the Americas and throughout the West to examine our ‘style of life’ and to reflect on the consequences that our decisions have for the environment and for the poor.”

The Women’s Ordination Conference, established in 1975, accused Pope Francis of “willfully turning his back on the calls of women for recognition of the sacramental ministries they offer the people of the Amazon and the global Church.”

Catherine Pepinster, the English historian and former editor of The Tablet, called it “grim” that the church would suggest “clericalism is automatically part of the priesthood.”

Some Catholics in Germany criticized the exhortation’s treatment of women, according to the German Catholic news service KNA. Thomas Sternberg, president of the Central Committee of German Catholics, was disappointed by “the lack of courage to pursue real reforms.” Agnes Wuckelt, deputy chairwoman of the German Association of Catholic Women, called it “unbearable that the official church continues to deny women equal rights and degrades them to service providers due to biology.”

Other commentators praised the pope’s message. Michael Bayer, director of evangelization and adult formation at St. Clement Catholic Church in Chicago, called the document “simply breathtaking.” He added: “It is one of the most beautiful, prophetic texts I have ever encountered.”

Michael Bayer, director of evangelization and adult formation at St. Clement Catholic Church in Chicago, called the document "one of the most beautiful, prophetic texts I have ever encountered.”

Commenting on Twitter, David DeCosse, director of religious and Catholic ethics at Santa Clara University, said: “I get the anger about women priests and married priests but think a bigger issue is: How can its defense of indigenous peoples and lands in light of the Gospel be extended to the indigenous around the world?”

“— Acknowledgement of colonialism and neo-colonialism

— The frequent citation of Amazon poets.”