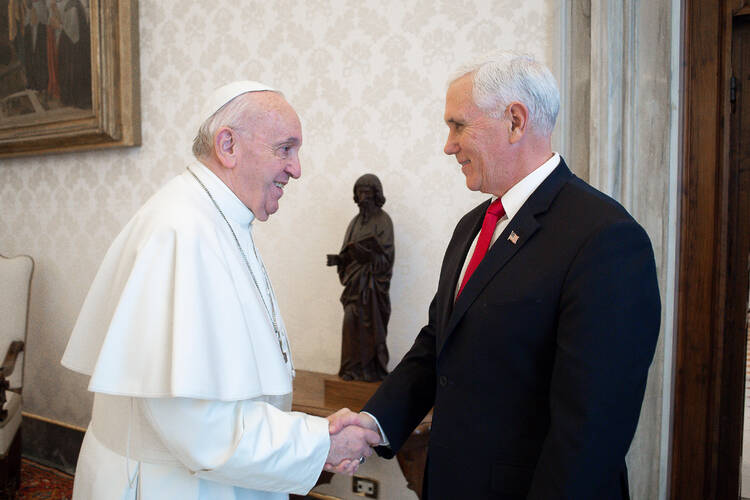 U.S. Vice President Mike Pence met Pope Francis in the Vatican at noon on Jan. 24, and the two spoke together in private for an hour, a surprisingly long time for an audience with someone who is not a head of state. It was their first meeting.

Pope Francis welcomed the vice president, who was raised Catholic, and then led him into the private library where he receives heads of state and distinguished guests and where he received President Trump on May 24, 2017.

“I wanted to extend the warmest greetings on behalf of President Donald Trump who so enjoyed his visit here,” Mr. Pence told Francis as they sat down.

Pope Francis then engaged in a private conversation with the vice president, with the aid of interpreters. The length of their conversation would suggest that they went into depth on some topics.

The two spoke together in private for an hour, a surprisingly long time for an audience with someone who is not a head of state.

When they finished their private conversation, Mr. Pence presented his wife, daughter-in-law and other members of his delegation to the pope. The two leaders then exchanged gifts.

Mr. Pence gave the pope a wooden cross carved from a tree on the grounds of the vice president’s residence. Francis gave him a medallion depicting “the angel of peace,” a copy of his message for the World Day of Peace 2020, as well as copies of some of his writings, including “The Joy of the Gospel” and “Laudato Si’.”

According to an Indy Star profile of Mr. Pence from 2016, he was born and raised a Catholic, and attending Mass and serving as an altar boy was an important part of his life. During college, he began attending a non-denominational church, where he met his future wife. He now describes himself as, “a Christian, a conservative and a Republican,” in that order, and has also called himself “a born-again, evangelical Catholic.”

Mr. Pence told Francis “you made me a hero” back home by granting him the private audience.

The vice president came to the Vatican from Jerusalem where he had participated in the Fifth World Holocaust Forum at the Yad Vashem Memorial yesterday, Jan. 23, with presidents, prime ministers and royalty from over 40 countries. Given this fact, it would seem reasonable to presume that he and the pope spoke about this and perhaps also the situation in the Holy Land.

When he arrived at the Vatican just before noon with his wife and daughter-in-law, Mr. Pence was greeted by the regent of the papal household, Msgr. Leonardo Sapienza. The U.S ambassador to the Holy See, Callista Gingrich, and her husband Newt, the former U.S Speaker of the House, were also present in the Belvedere courtyard of Vatican to greet him.

Before the two leaders met, one Vatican official told America the meeting was a “courtesy” visit, as Mr. Pence was also visiting Italy and was scheduled to meet with the country’s president, Sergio Mattarella, who also attended the Holocaust Forum, and Prime Minister Giuseppe Conte. But given the length of the meeting it could have been much more. The Vatican did not issue a press statement, since the vice president is not a head of state.

The vice president met the pope hours before Mr. Trump was scheduled to attend the March for Life rally in Washington, the first time a sitting U.S. president has done so in the history of the anti-abortion rally.

Mr. Pence’s audience with Pope Francis took place as the U.S. Senate is holding the impeachment trial of President Trump.

As he bade farewell, Mr. Pence told Francis “you made me a hero” back home by granting him the private audience. Some understood this remark as a reference to his mother, a devout Catholic, would have been overjoyed that he met Francis. It would seem to suggest that the vice president had mentioned her during their private conversation.