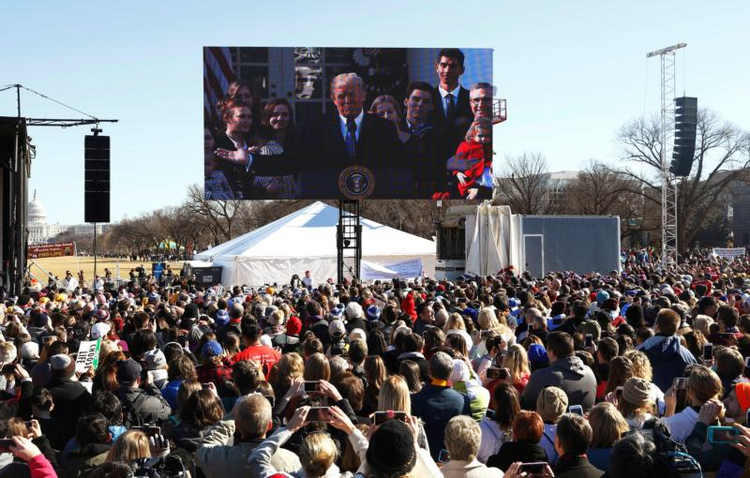 U.S. President Donald Trump is projected on a large video screen as he addresses attendees of the annual March for Life rally in Washington Jan. 19, 2018. (CNS photo/Eric Thayer, Reuters)

Trump announced he will speak at the march on the National Mall, becoming the first sitting president in history to do so.

"We are so excited for him to experience in person how passionate our marchers are about life and protecting the unborn," Mancini said.

Trump’s impending appearance at this year’s event has been met with criticism from some commentators. John Gehring, Catholic program director at Faith in Public Life, wrote on Twitter: “Anti-abortion leaders and voters who hitch their wagons to President Trump do serious damage to the credibility of the pro-life movement.”

Michael Wear, who directed faith-based outreach for President Obama’s re-election campaign in 2012, tweeted, “Really something that as Trump becomes more compromised as an individual and president year by year he simultaneously hugs pro-lifers closer and closer.”

Others have praised the president’s upcoming visit. Pro-life advocate Abby Johnson wrote that no U.S. president “has done more to break down the abortion industry” than President Trump. Alexandra DeSanctis of the National Review tweeted that the president’s attendance at the march will incentivize members of the media to cover it, “if only to drastically downplay crowd size and ‘fact check’ every sentence [Trump] utters.”

The news of Trump addressing the pro-life crowd came on the anniversary of the 1973 Supreme Court decisions in Roe v. Wade and Doe v. Bolton, which legalized abortion on demand across the country. It also was the annual Day of Prayer for the Legal Protection of Unborn Children.

"See you on Friday...Big Crowd!" Trump tweeted late Jan. 22. The announcement he would address the march sent a surge of web traffic to the March for Life website, marchforlife.org. The site was down for several hours, march officials said.

Mancini praised Trump and his administration for being "consistent champions for life," from appointing "pro-life judges and federal workers, to cutting taxpayer funding for abortions here and abroad, to calling for an end to late-term abortions."

Bishop Stowe: Why the MAGA hats at the March for Life?
Michael J. O’Loughlin

"We are grateful for all these pro-life accomplishments and look forward to gaining more victories for life in the future," she added.

Last year, Trump addressed the march in a videotaped message from the White House. Vice President Mike Pence was a surprise speaker addressing the crowd in person.

In 2018, Trump's remarks to the March for Life that January were broadcast live from the White House Rose Garden, where he was surrounded by a crowd surrounding that included 20 students from the University of Mary in Bismarck, North Dakota.

He said his administration "will always defend the very first right in the Declaration of Independence, and that is the right to life." Trump praised the pro-lifers for having "such big hearts and tireless devotion to make sure parents have the support they need to choose life."

Over the years, sitting Republican presidents addressed the crowd via an audio or video feed -- Ronald Reagan, George H.W. Bush and George W. Bush. Once he was out of office, Reagan even sent a letter of encouragement to the marchers; in a 1991 message, he said the right to life is "not an argument, not a dispute. It is a God-given right.''

President Bill Clinton and President Barack Obama, both Democrats, made news on or near the Roe anniversary in their first year as president by signing an executive order reversing what was known as the "Mexico City policy," which blocked the federal government from providing aid to programs that promote or perform abortion overseas. For both Clinton and Obama, the action came within hours of their inauguration as president, in 1993 and 2009, respectively.

Show Comments ()
Comments are automatically closed two weeks after an article's initial publication. See our comments policy for more.
Provide feedback on this article
Join the conversation: Login or create an account
Before you can comment, you need to update your profile to include your first and last name, as required in our comments policy. Then reload this page and you'll be set up for commenting. Update your profile
Advertisement
More: Donald Trump / Abortion / Pro-Life / US Politics